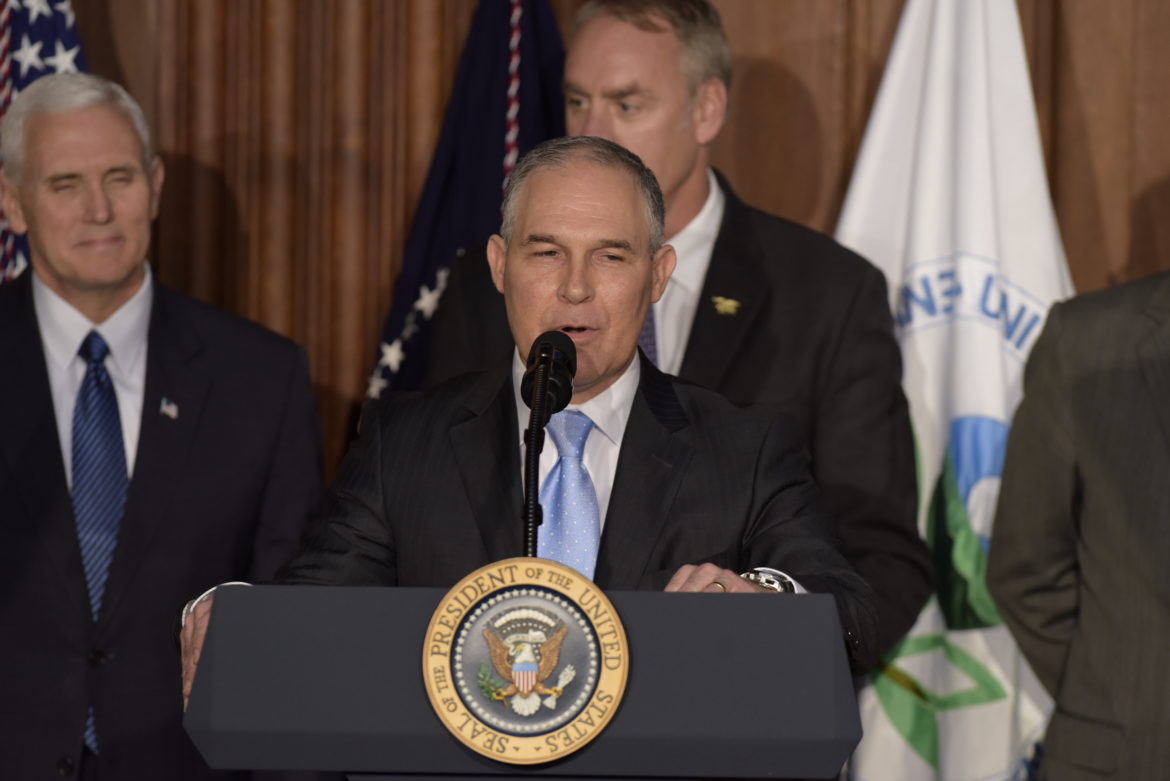 The two Democrats are the latest elected official to say the scandal-ridden administrator should not be in charge of the agency.

“Scott Pruitt has been surrounded by ethical problems and has failed to take the core mission of the Environmental Protection Agency seriously,” Heinrich said in a statement. “He has been plagued by conflicts of interest and built a long track record that is antithetical to the EPA’s responsibility to keep our nation’s land, air, and water clean. And perhaps most damning of all, Mr. Pruitt has a willful disregard for data-driven science when it comes to tackling climate change.”

It isn’t Pruitt’s stance on climate change, however, that has led to even some Republicans to call for him to resign.

“He has taken hundreds of thousands of dollars from the taxpayers and spent it on special perks for himself, while trying to slash the budget for the health and safety programs his agency oversees,” Udall said. “And the list of ways he has abused his office just keeps getting longer: lavish first class flights around the world; swanky hotel stays; taking EPA enforcement officers away from their jobs investigating polluters to serve as his round-the-clock personal security – even while on a family vacation to Disney World; big salary raises for his friends; building a $43,000 soundproof phone booth in his office; and even detailing EPA staff to find him a D.C. apartment. The straw that broke the camel’s back was accepting a special deal on an apartment owned by the wife of a lobbyist tied to industries regulated by the EPA.”

Pruitt leased a room from the wife of a lobbyist who works on energy issues for $50 a night—which many many see as an undermarket rate. After leaving the house, he traveled extensively and stayed at his Oklahoma home and had no fixed address in Washington D.C..

An EPA ethics official initially cleared the arrangement and said it didn’t violate federal gift laws. But then, this week, that same official said he didn’t have enough information before making his initial report.

Pruitt exacerbated his problems with a combative interview on Fox News earlier this week. The EPA head sat for the interview despite warnings from the White House to avoid interviews, even with conservative outlets that are friendly to the administration according to the Washington Post.

This came after previous scandals, which showed Pruitt spent more on travel than his predecessors, including using first-class travel when previous EPA administrators flew coach.

President Donald Trump said Tuesday that Pruitt has his support. But in the past, Trump has expressed support for high-profile appointees before subsequently firing them (some via Twitter).

“New revelations keep coming to light, and there’s no sign that we’ve reached the end,”Udall said. “It’s past time for Pruitt to go, and I will be introducing a ‘Sense of Congress’ resolution calling on him to resign for the good of the American people.”

“I’ve heard from thousands of New Mexicans who have made a strong case that Mr. Pruitt is not the right person for the job, and I agree,” Heinrich said. “I believe it’s time for him to resign.”

Pruitt had been Oklahoma’s Attorney General and challenged the agency he now leads on a number of occasions, even suing the EPA over its Clean Power Plan. While AG, Pruitt sent a letter to the EPA, complaining that the agency was overestimating the amount of air pollution caused by oil and gas operations in Oklahoma. As reported by the New York Times in 2014, that letter was written by lawyers for Devon Energy, one of the oil and gas companies that operates in Oklahoma and many other states. Pruitt’s staff copied the letter on state letterhead, then sent it to the EPA with his signature.

Laura Paskus contributed to this report.