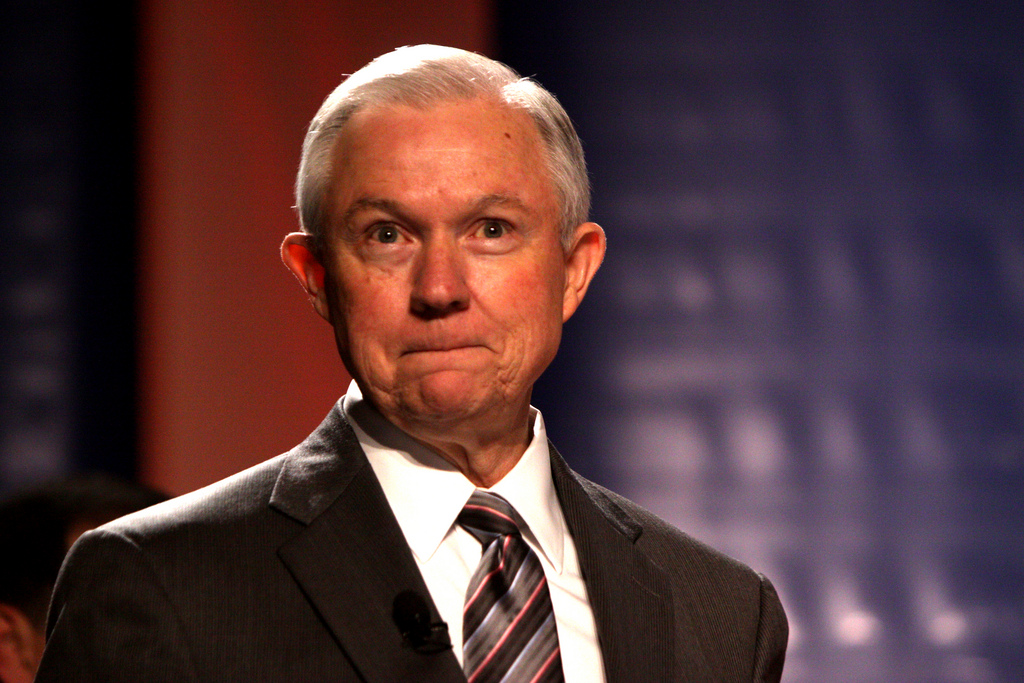 Sessions reiterated pledges to increase prosecutions of those who enter the country illegally in an attempt to deter others from even attempting to enter.

“If you break into our country, we will prosecute you,” Sessions said.

Sessions said that Trump “expects us to not just play around with this problem, but to fix it and that’s certainly my goal.”

One way he said Trump would help solve illegal immigration is by building a border wall. He said the lack of such a wall was “an open invitation to illegal crossings.”

He also praised the U.S. Attorney’s office in New Mexico, which he said “already demonstrated its effectiveness over the last two years.” He said the office’s prosecutions of illegal crossings increased seven-fold from two years ago.

Sessions described several so-called “loopholes” in the immigration process, including what he called a “credible fear loophole.” He was referring to a longstanding U.S. policy that allows  people who have a credible fear of persecution or torture in their home country to gain asylum admittance. The Trump administration recently made it more difficult for refugees to apply for asylum.

“Just because you have a danger in one town in Mexico or any other country doesn’t mean you can’t go to some other place in that country,” Sessions said.

By referring to the asylum policy as a loophole, Sessions was echoing far-right media, including sites like Breitbart and The Daily Wire. The Center for Immigration Studies, which argues for lower levels of all immigration including legal immigration, has also written about this so-called loophole.

The Washington Post found last year that a claim Sessions made about the credible fear process was not true. One of the newspaper’s fact checkers found that asylum applications because of “credible fear” increased largely because of “the influx in people fleeing violence, and human rights abuses in Central America’s Northern Triangle – Guatemala, Honduras, and El Salvador.”

“I am incredibly disappointed that of all the work that needs to be done and the investigations that need to be initiated and/or completed, our U.S. Attorney General is spending his time trying to secure support for Trump’s border wall,” Lujan Grisham said in a statement. “I hope New Mexicans will let Jeff Sessions know that they do not want to fund this border wall. This is a wall that is unnecessary and a wall that is wasteful.”

A number of southern New Mexico officials, including state representatives, invited Sessions to speak to them about their border experiences, but Sessions declined.

Sessions said that up to 4,000 troops would be headed to the U.S.-Mexico region to aid border enforcement.

Sessions also made sure to praise Trump, who has reportedly been less-than pleased with the job Sessions has been doing as Attorney General.

He touted the “Trump economy” and said that wages increased by their highest rates in years.

He said some business owners were “whining” about having to pay higher wages to Americans rather than lower wages to immigrants. And he said this impacts recent immigrants and minorities.

A better economy, Sessions said, could be one reason why there was an uptick in illegal crossings over the last month.

“Things are going well economically and people may be coming for that reason,” Sessions said.

Sessions toured the U.S. Attorney’s office in Albuquerque before the speech and said he would tour the Las Cruces office afterward.