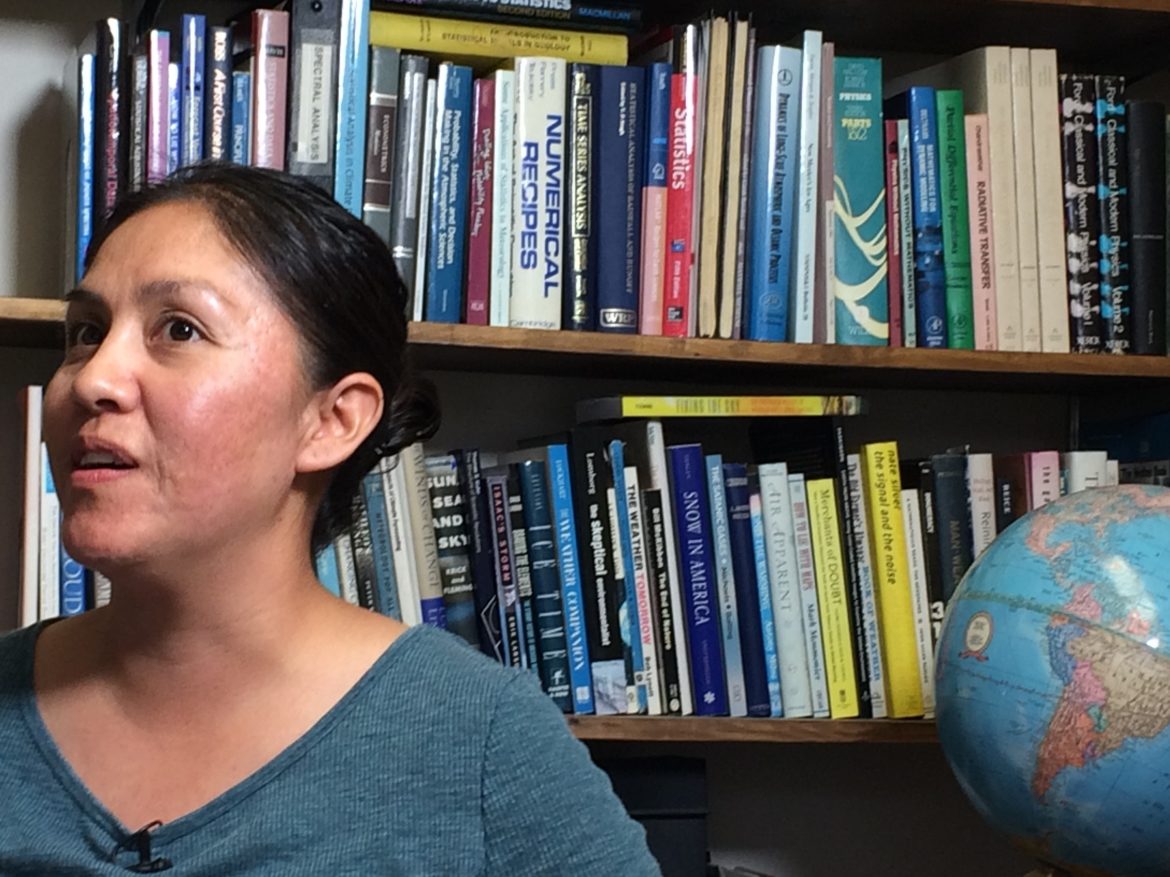 For more than a decade, researchers have explained that warming will affect water supplies in the southwestern United States. Now in a new paper, hydrologist Shaleene Chavarria and University of New Mexico Earth and Planetary Sciences Professor David Gutzler show climate change is already affecting the amount of streamflow in the Rio Grande that comes from snowmelt.

The paper, recently published in the Journal of the American Water Resources Association, is based on her graduate work in the Earth and Planetary Sciences Department.

Snowpack is the main driver of the Rio Grande’s flows in the Upper Basin of New Mexico, explained Chavarria, who examined annual and monthly changes in climate variables and streamflow volume in southern Colorado for the years 1958 through 2015.

She found that flows have diminished in March, April and May. And not only is snowpack decreasing, snowpack melts earlier as temperatures continue to rise.

This means flows have increased in the late winter and early spring and decreased later in the season, when farmers need it most for irrigating crops and orchards. The paper points out that as temperatures continue warming and streamflows drop during the growing season, more people will rely on groundwater pumping, further depleting already-stressed aquifers.

“One thing that we that we really need to keep in mind is that conditions in the basin are changing—we know from the paleoclimatic records, and stories from the past—and we have projections of what could happen in the future,” she said. “We need to take those together and we need to prepare because ultimately what we do today and in the coming years is going to affect future generations—mainly our children and our grandchildren, so we need to take care of what we have now.”

Like many in New Mexico, Chavarria’s community—and its forests and watershed—have been affected by climate change.

“I come from Santa Clara Pueblo, and our traditions revolve around the seasons and revolve around the water that we get from the river,” she said. “We’ve seen a lot of changes in our in our area especially with the fires that have impacted our main watershed.”

In recent years, multiple fires have hit the Santa Clara. In 2011 Las Conchas devastated the Santa Clara River and its watershed. “We had that major fire and then right after the fire, we had debris flows and flooding which pretty much added to the effects that the fire had on our community, and so it’s still recovering.”

Her perspective as a member of Santa Clara Pueblo also informs her work as a scientist.

“I don’t want to speak for everybody, but my perspective growing up is that everything works together, goes together, and your decisions affect everything else,” she said. “So, for example, if you degrade the environment, it’s going to have an impact on future generations…it’s the same concept in the water cycle, everything working together.”

Time to prepare for a new normal

Her co-author and graduate adviser, David Gutzler, has worked on climate change issues in the southwestern United States for more than 20 years.

The state is now about three degrees warmer than it was during the 1970s, he said, and those changes are seen in extremes. Winters aren’t as cold, and more summer days are very hot, even by New Mexico standards. That warming trend over time is different from variability, or year to year changes.

“New Mexico is a variable climate so for millennia we have seen wet periods and dry periods on the order of decades,” he said. “What’s not so normal, by historical standards, is how warm it’s been.”

The takeaway for policymakers, he said, is that snowpack is becoming a less reliable source of streamflow in New Mexico’s rivers. Even in snowy years, the region’s warmer springs melt the snowpack faster and earlier than in the past.

“Last year, in 2017, we had above-average snowpack up almost to the point of peak snowpack, and it just melted away,” he said. “So even in a year where snowpack looked terrific, we ended up with nearly average streamflow by historical standards.”

He said that’s a warning of things to come.

“Thinking long-term, we still don’t have a really good idea of how much streamflow to expect as a new normal—the interplay between precipitation and temperature is different in a warmer climate and we’re still sorting out what’s likely to happen in the rivers as the climate gets significantly warmer,” he said. “I think the paper we just wrote is a contribution to that, but there’s an awful lot of work to be done to narrow down the uncertainties of what sort of future climate we ought to expect and plan for.”

But New Mexicans certainly need to plan for dry spells that can last for many years—and that are occurring within a warmer climate, with less snowpack, less groundwater recharge and less surface water flowing down the rivers.

“The effect of warmer temperatures on those drought periods is to make extreme drought even more severe by increasing evaporation rates and drying out the soil, melting the snow,” he said.

The Southwest isn’t going to run out of water, he said. But we do need to make changes.

“The ways we’ve managed water in the past may not work to provide all the water that people think they need in the future,” he said. “And the sooner we plan for that, the more likely we are to end up managing water in a way that does satisfy people’s needs.”