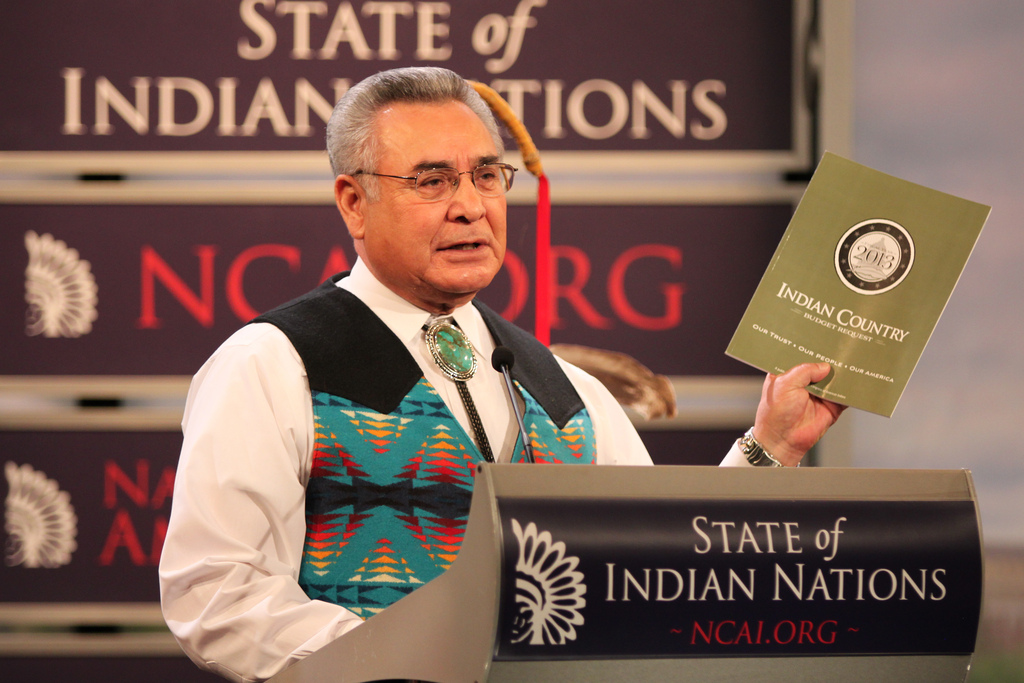 Jefferson Keel, lieutenant governor of the Chickasaw Nation of Oklahoma and president of the National Congress of American Indians, pictured in 2012. Flickr/cc

Ten years of animosity between tribal governments and union organizers led up to a meltdown of bipartisan efforts to pass the Tribal Labor Sovereignty Act on Monday. The bill, which would have excluded tribal governments from legislation allowing workers to unionize or strike, failed to receive the votes in the Senate it needed to pass. State and federal governments are already excluded from the National Labor Relations Act, and until recently tribal governments — being sovereign nations — were as well. But that changed in 2004, thanks to the law’s vague wording.

The NLRA was established in 1935, and for almost 80 years it prevented private industry from blocking workers’ unionization and strikes. But it did not apply to tribes, states and the federal government. However, in 2004, the National Labor Relations Board reversed that practice with regard to tribes because the law did not specifically exempt them under its definition of “employer.”

Unions are understandably worried by the Tribal Labor Sovereignty Act. If passed, it would apply to tribal businesses operating on tribal lands, from hotels and casinos to construction companies and power plants, potentially blocking hundreds of thousands of their workers from unionizing.

“While the AFL-CIO continues to support the concept of tribal sovereignty in truly internal, self-governance matters, it is in no position to repudiate fundamental human rights that belong to every worker in every nation,” the organization wrote in a January letter to Congress.

Republicans contest the 2004 change as government overreach, and asserted that treating tribes on a nation-to-nation basis does not come with stipulations.

That’s what Jefferson Keel, Lieutenant Governor of the Chickasaw Nation of Oklahoma and president of the National Congress of American Indians, calls “conditional sovereignty.”

“ ‘Conditional sovereignty’ is not sovereignty at all: It is just a fence-straddling way out for those who are conflicted about their support for labor unions and their support for tribes and the inherent sovereignty they possess,” Keel wrote recently in The Hill. “But in policymaking, as in life, choices define who we are and what we value.”

Keel argued the 2004 change is a clear and direct violation of tribes’ inherent sovereign rights: “It is discriminatory, and an outrage.”

The bill passed in the House last month. Rep. Tom Cole, R-Oklahoma, a member of the Chickasaw Nation, hopes to attach the Tribal Labor Sovereignty Act to an upcoming appropriations measure, which lawmakers in both chambers must pass by the end of March to avoid a government shutdown.

The bill got support from both Democrats and Republicans in the House and Senate. Still, on Monday, the majority of Democrats voted against it. Republicans are likely finding it easy to support, as their party is traditionally unsupportive of unions, and many Democrats see it as an issue shaped not by the sovereign rights of tribes but by the rights of workers to unionize.

Sen. Tom Udall, D-New Mexico, noted that bills from the Indian affairs committee generally receive the support of both parties, but Monday’s vote was divided, which Udall noted when addressing his colleagues.

“For the first time in ten years, this chamber just debated an Indian affairs bill using valuable floor time, not unanimous consent,” he said. Udall expressed displeasure at being excluded from the drafting process in spite of his role as the vice chairman of the Senate Committee on Indian Affairs, and chided his colleagues for dragging their feet for years when it comes to Indian Country writ large.

“Over this decade, in which both Democrats and Republicans have held the majority, Indian Country has seen its priorities sidelined,” he said. “Important legislations that touches the lives of Native veterans, Native families, and Native communities from Maine to Hawaii, from Florida to Alaska, makes it out of the Indian Affairs committee only to die waiting on the Senate legislative calendar.”

That includes measures such as the Native American Housing and Assistance and Self Determination Reauthorization Act, which would provide federal assistance for affordable housing in low-income areas of tribal lands, and the Progress for Indian Tribes Act, which could streamline the Department of the Interior’s self-governance process for tribes. Both have bipartisan support and have not received a hearing, Udall said. “It’s shameful that this full body does not resolve these important issues facing Indian Country.”

On that point, it’s hard to disagree. Tribes and Indigenous communities have never been properly represented in Congress, a problem more and more Native Americans are hoping to personally help rectify by running for office. If anything, what happened on the House floor Monday was yet another example of why it is important to have Indigenous lawmakers at the table when deciding what is best for Indian Country. Like Rep. Patricia Roybal Caballero, a New Mexico state lawmaker of Piro-Manso-Tiwa ancestry, told me recently, even if just a few Indigenous lawmakers make it to Congress the results could be significant.

“Through our eyes, we know that through our history that just three or four of us can be resounding,” Roybal Caballero said.