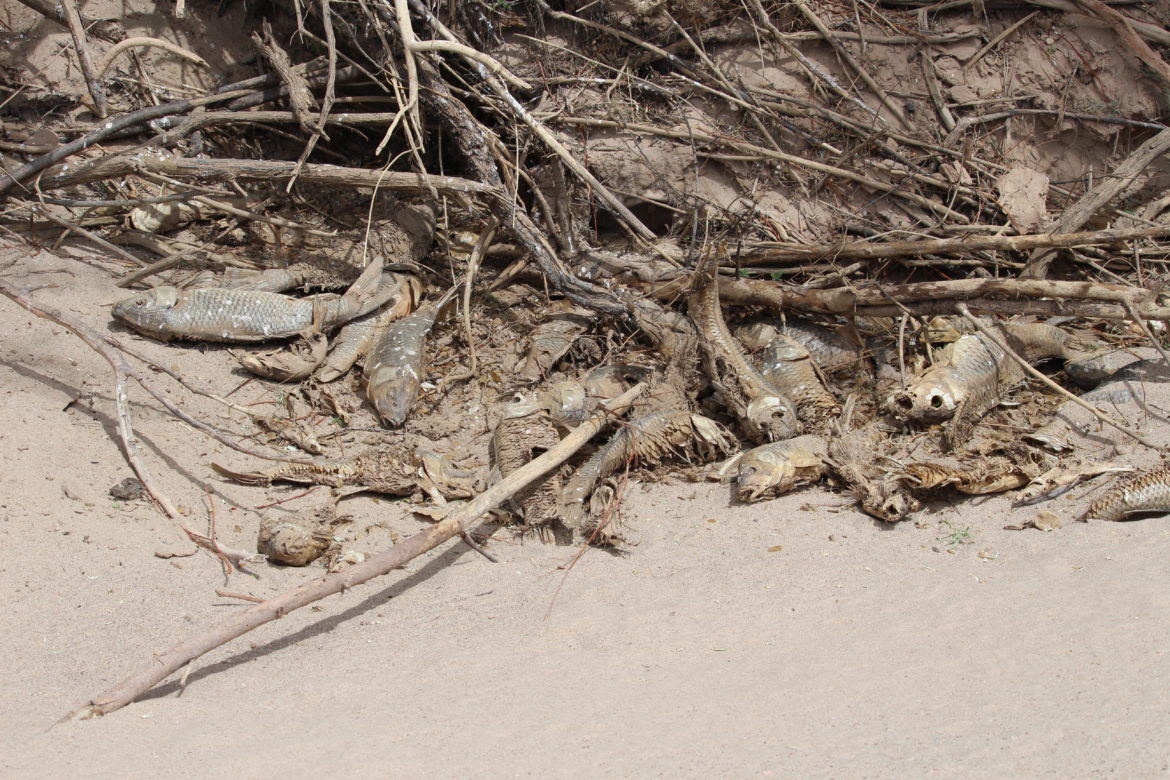 I smell the mounds of dead fish before seeing them.

By now, the fish are desiccated. Most lie in low spots along the riverbanks where they crammed together, taking refuge as the last of the puddles and rivulets dried. The temperature is in the high 80s as we trudge up the sandy channel of the Rio Grande upstream of the town of San Antonio. I wonder what it must have smelled like two or three weeks ago, when the river first dried here.

In early April, when the Middle Rio Grande should have been rushing with snowmelt, New Mexico’s largest river dried. It started through Bosque del Apache National Wildlife Refuge, spreading to more than 20 miles by now. The Albuquerque stretch may dry come June or July, which would mean some 120 miles dry altogether this summer.

Already, if you live in Albuquerque, you may have peered over the bridges and seen sandbars and slow water this spring. Even in places like Velarde or Española, historically low flows are trickling through your town, the result of not enough snow in the mountains this winter.

To see this happening in spring is shocking. But we shouldn’t be surprised. We knew this could happen. Just like we knew the climate was changing.

We know, for example, that warming makes an arid climate even drier.

On average, our snowpack is decreasing, moving north and melting earlier. That leads to less water in the rivers when we need it—spring and early summer before monsoons arrive.

And even when there is snow, warmer temperatures transform more of it to water vapor before it can liquefy its way into the watershed. Warming dries out soils and sends more dust into the air. That’s bad news, both for breathing creatures and snowpack, as topsoil-coated snowpack melts faster.

Groundwater isn’t being recharged through snowmelt and streamflows, and we’re pumping more to compensate for the lack of surface water. New Mexicans survived the drought of the 1950s by pumping groundwater when the rivers slowed and the rains failed to fall. Since then, we’ve kept pumping, depleting aquifers and groundwater supplies.

And after the fires, some of our forests can’t regenerate. Where they once thrived, ponderosa pine and mixed conifer forests can’t survive because it’s too warm—not to mention dry. In some places, even hardy junipers are drying out and dying off.

Las Conchas burn scar, with the Sandia Mountains in the distance

Before the Dome Fire and then Las Conchas, which burned here in the Jemez Mountains seven years ago, this was a dense conifer forest. Today, the climate is too warm for those trees to return.

In some places across this 30,000-acre burn scar, aspens and locust trees are sprouting where firs used to grow. In other places, the ground remains bare. When rains fall here, floods drive torrents of mud, ash and debris downstream.

Climate change means our forests change; our rivers and our grasslands change. It means our cities and small towns, farms and orchards change.

And we’ve known this for a long time.

In 1965, President Lyndon B. Johnson’s science advisers told him humans were “unwittingly conducting a vast geophysical experiment” by burning within a few generations fossil fuels that had accumulated over hundreds of millions of years. The carbon dioxide humans were injecting into the atmosphere would cause changes, they wrote, that would harm human beings.

In 1988, the New York Times reported on its front page that the Earth was warming. NASA scientist James Hansen testified before Congress, urging action to cut carbon emissions.

We knew what was happening.

In 2005, New Mexico released a report on the potential effects of climate change on the state. The 51-page summary report laid out a range of problems and potential solutions, related to everything from water and infrastructure to public health, wildfire and environmental justice.

New Mexicans then elected a governor who ended all state programs under her authority related to climate change.

Ten years later, scientists, economists and hydrologists worked together to understand New Mexico’s drought vulnerabilities. They handed off a report to the legislature that revealed problems with groundwater supplies in the Lower Rio Grande.

For decades, there have been scientific papers, government reports, planning documents, economic studies and international agreements.

We knew what was going to happen.

And yet, here we are.

No matter what you might hear from certain voices, this drying in the Middle Rio Grande is not normal for springtime.

That’s not to say that the river here has never dried in the spring, since records have been kept or before.

But just because something has happened before doesn’t mean it’s normal.

As it continues happening—as a river that supports millions of people in three states and two countries continues to dry—we all need to pay attention.

We also need to understand what biological, chemical and hydrological impacts are occurring, says Clifford Dahm, professor emeritus at the University of New Mexico’s Department of Biology and an expert on intermittent and ephemeral rivers.

“The aquatic creatures that live in the river, as it’s drying and staying dry longer, are going to change,” he said. “There will be a shift towards completely different communities of fish, algae, invertebrates and trees.”

Right now, we don’t know how quickly those shifts will occur, which species will survive, die or recover. But when the water table drops to more than ten feet below the surface, we do know cottonwood trees struggle and then die, Dahm said.

Even on the Gila River in southwestern New Mexico, warming will decrease flows by about 5 to ten percent due to decreasing snowmelt runoff.

Right now, humans aren’t suffering in New Mexico because the river has dried for 20 miles.

Even though the river’s water is currently diverted to irrigation canals, some farmers might decide to fallow their fields, knowing that water will run out, too. But there are buffers, including federal assistance. And cities will figure things out. We’ll draw down water in upstream reservoirs and fire up our groundwater pumps.

But what happens if the monsoons don’t come? What if next year’s snowpack is just as bad? What happens when the water stored in reservoirs runs out?

Like the dry riverbed, we know these things will happen, if not next year, then the year after.

River gage with no water to measure

Some people talk about moving away from New Mexico or the southwestern United States if things get too bad, too dry.

But not everyone can move when warming and drying are so serious that we have a true emergency on our hands. Not everyone has the resources to leave.

And for some people, this river, these mountains, the mesas and uplands have always been their homelands. Their ancestors are here and they have no other lands. They will never leave.

Ignoring the signs and the studies for all these years has been a choice. A choice that leaves behind those most vulnerable, a choice that continues to perpetuate centuries of injustice.

If ever there were a moment to abandon hand-wringing, apathy or divisiveness, it is now.

Let’s challenge the standard line in New Mexico: that water issues are so complicated that we can’t do anything differently, try anything new.

Yes, our water issues are complicated. Water is allocated in special ways. It’s legally complex where and how water can be stored, and who is allowed to use it.

But that doesn’t mean we just leave things as they are. Or that we leave all the decisions to just a few people.

Just because something is complicated or overwhelming—like climate change—doesn’t mean we shrug and say, “Maybe next year the snowpack will be better.”

The Rio Grande near Escondida, N.M.

Last week in Santa Fe, climate scientist Jonathan Overpeck spoke about “hot drought”—dry periods that are warmer than past conditions—and megadrought. Looking back at the tree ring records, the longest drought—or megadrought—on the Colorado River and the Rio Grande headwaters was 50 years long, around 200 A.D.

Future warming is a “sure bet,” he said: “There isn’t a bet you could make that’s more guaranteed to come true.”

Depending on which emissions scenario modelers use, warming in the southwestern U.S. will mean a temperature rise of 4 to 7 degrees Celsius rise by mid-century. Surface water risks are exacerbated, he added, by unsustainable groundwater use.

“If we continue business as usual”—referring to greenhouse gas emissions—“flows will be knocked by 50 percent by the end of the century,” he said of the Colorado River. “That’s the cost of global warming for the Southwest.”

It’s not all bad news, he said. The Southwest, including New Mexico, can become known for developing water strategies to deal with scarcity. “That’s the future economy of the Southwest, not sticking our head in the drier and drier sand as the news gets worse,” he said, adding: “There will be wet years—and we when get a good year, don’t just allocate that water to a new user, put it underground.”

States like Arizona, Nevada and California already store water underground, instead of in reservoirs, which lose more and more water to evaporation as the region warms.

“The other really good news,” he said, “is we know what the problem is.”

Almost a week after hearing Overpeck’s talk, I go back to the dry riverbed of the Rio Grande.

This time, I’ve brought along a friend who moved here from Germany. Walking through the cottonwoods and Russian olives, when we spot the dry channel, he asks, “That is the Rio Grande?”

That, I say, is the Rio Grande. And we hop down into the channel, sand filling our shoes.