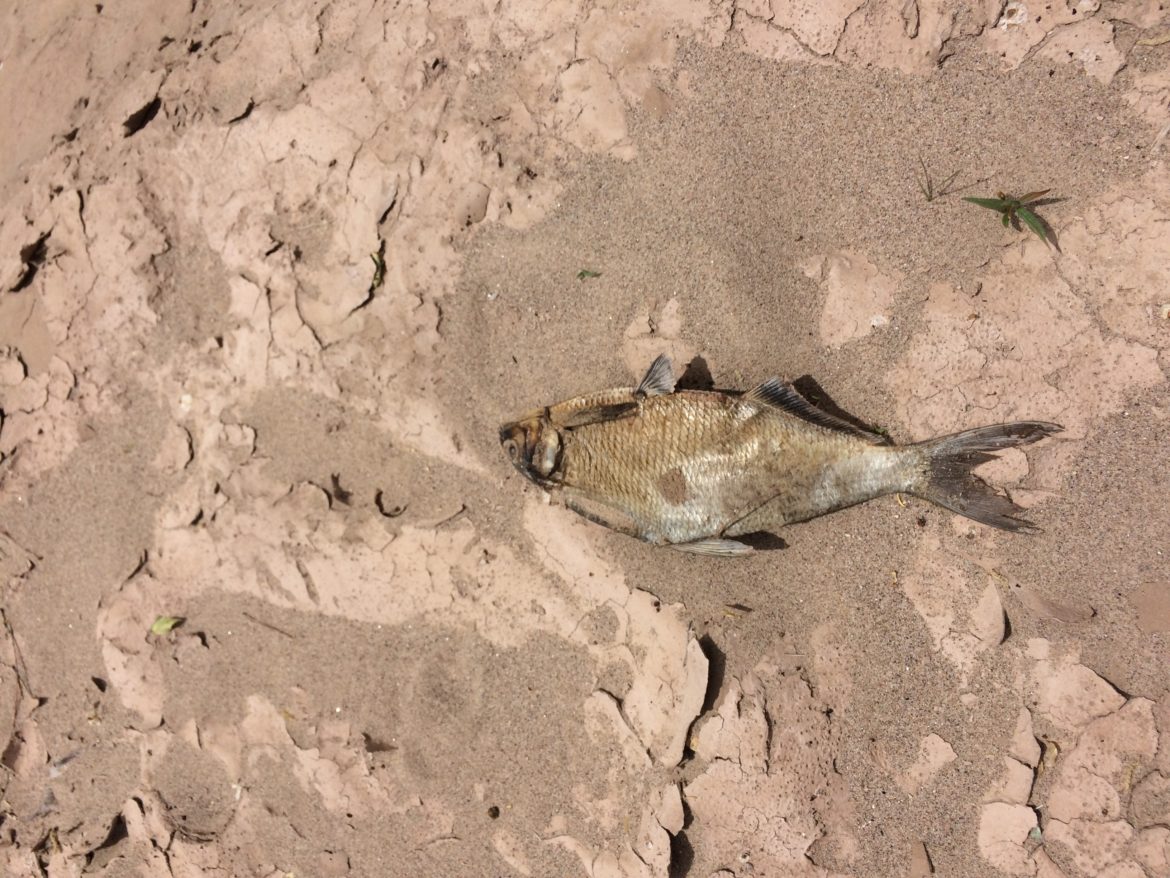 There was a time when wading waist-deep into the Rio Grande in the heat of the summer’s blistering solar rays was as common as finding a wild willow tree growing by the river. But as we observe this becoming a distant memory, a new reality is emerging. A farmer friend, on his way to the river with some friends, sent me a few pictures. In it were children enjoying the river, just ankle deep, grateful even for the small reprieve. I thought of Laura Paskus’ article and the fish trying desperately to escape impending death. I could smell the putrid aroma she described, imagining her unable to breathe deeply due to the pungent odor as she walked the length of the dry river bed.

It was with these thoughts that I took to the road, interviewing a few farmers to see how this arid spring is affecting our food source. A few chance encounters led me to a couple people in particular. Recently, I met a farmer by the name of Poki Piottin at a High Country News talk held in a local coffee shop. As the writers and distributors discussed the future of the magazine, contemplating a reduction in the number of magazines distributed, Piottin spoke of the importance of maintaining a magazine that is committed to telling the truth, telling the stories of a land in need of healing, and the need for a shared community of caring individuals. I could tell he was deeply attached to the land and committed to education and sustainability.

Just weeks later, I met writer and garlic farmer, Stanley Crawford at the Writer’s Dinner Gala in Santa Fe. There I found out that Netflix created a documentary called Rotten, featuring Crawford’s garlic farm, recounting lawsuits that raise troubling questions about top suppliers in the garlic industry. And at the Santa Fe Railyard Market, I had the opportunity to speak with beef farmer, Thomas Casados, as well as vegetable farmer, Matt Romero, a man on a mission to grow food!

After speaking to the farmers, a few themes became clear. The top concern is that climate change IS affecting our food. When asked about his top concern, Piottin described what he thought farming would look like in five to ten years, “BUGS! We’re going to be eating bugs. With climate so unpredictable, and it could get way worse, it is unlikely that we’ll be able to continue growing our main food crops, such as wheat, corn, soy and rice.”

Asked the same question, C4 Farms cattleman Casados explained he’s reduced the area where the cattle can graze. Sadly, his neighbor was forced to take more drastic measures, cutting his herd by 30-40 percent in 2013. Crawford, the garlic farmer, described how he has stopped planting on his entire property, effectively cutting out winter squashes and other crops, simply because there isn’t enough water.

“I grow garlic but can’t grow anything else without water,” he said.

Regardless of whether we are talking about growing tomatoes or watering cattle, the truth is staring us blatantly in the face: climate change is impacting our food security.

Another subject each farmer discussed from varying perspectives was the way the acequias are governed and purposed.

Piottin said it plainly, “If there’s a lot of water, it doesn’t matter. When there’s very little water, the fox gets it all.”

Management of the acequias seems to be a challenging problem, due to grossly underfunded government agencies’ inability to effectively manage resources and local commissioners within each community who are lax in their involvement, often times due to age or fear of legal action. Compounding these problems is the increase in local strife between those who need water. Some farmers are able to access more water, while others are simply out of luck.

Another reality forming in the eyes of the farming community is that the acequias are going to be rendered useless in the not too distant future. The system is set up to catch snowmelt, not rainwater from the monsoons. As the rainwater surges continue, the infrastructure that has been in place over 400-years continues to show damage from broken pipes and leaks. With intermittent monsoon torrents becoming our only source of water, it’s easy to deduce that a new system is necessary.

The haunting words of another farming vendor, “Do not rely on the snowpack in New Mexico anymore. Rely on the monsoon” stayed with me for days.

When asked what steps needed to be taken, Crawford broke it down.

And most importantly, though many are already speaking about entering the Sixth Mass Extinction, we can’t give up. “We need something drastic and rapid if we are to have any hope.”

I spoke with Crawford at length about Subhankar Banerjee’s eye-opening article, “The Environmental Dance,” effectively questioning the tightly held ideology that we are personally responsible for climate change, essentially freeing big business from their responsibilities. Banerjee takes a provocative stance showing how we have been effectively manipulated in addressing climate change.

Explaining this to Crawford, he seemed equally surprised that this has gone largely unnoticed. Shaking his head in dismay, the sigh escaping his lips, he remains frustrated with a system where we have to fight for renewable and sustainable methods.

Although there were many individual stories and perceptions, all agreed that something drastic has to happen. But what can we do?