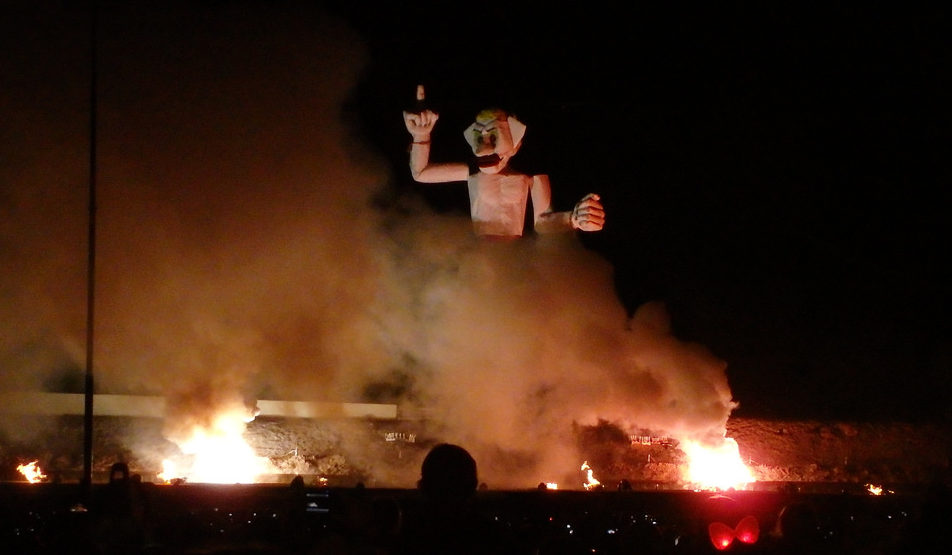 The burning of Zozobra in 2014. Image cropped. Flickr/cc

Evening, and a raucous crowd is milling beneath a giant marionette, waiting for the fire to begin. “Burn him!” they chant. “BURN HIM!” And, just like that, the lights of the old baseball park go out. A roar of approval from more than 60,000 people fills the air. In the darkness, faces are illuminated by cellphones; necks and wrists glimmer green, orange, and pink with the help of neon-glowing bracelets and necklaces.

Then there is fire.

Zozobra, or “Old Man Gloom,” symbolizes Santa Fe, New Mexico’s collective woes and grievances. He’s a 50-foot effigy resembling a nightmare puppet or whirling dervish. He burns lazily at first. Flames flicker at his feet, slowly run up his legs, jump to his torso, then his arms, until finally, his whole figure is engulfed. The intense heat radiates out into the crowd. People glow with happiness, their faces orange from the two-story bonfire.

For 93 years, every September, Santa Fe has publicly incinerated Zozobra. While 93 years might seem like an old tradition, that’s nothing compared to the Fiestas de Santa Fe, which begins one week later. Taken together, these two festivals have recently become an occasion for reflection, and in the case of the Fiestas, something more: a confrontation with history.

The Fiestas commemorates the reoccupation of Santa Fe by Spanish conquistadors after they were expelled from the region during the Pueblo Revolt. In 2017, eight people were arrested for protesting at the Fiestas, and Jennifer Marley, a citizen of San Ildefonso Pueblo, was charged with assaulting an officer. 2018 promises to be no different. In the wake of the Dakota Access Pipeline protest, in an America where white nationalists regularly occupy public space and Confederate monuments are fought over and often removed, the city of Santa Fe faces its own dilemma. How do you honor New Mexico’s colorful past without celebrating violent colonialism in racially charged festivities?

The Fiestas de Santa Fe stems from a 1712 proclamation to celebrate the peaceful reoccupation of Santa Fe in 1692, after the Spanish were driven from what is currently New Mexico by the Pueblo Revolt of 1680. While the first part of the reoccupation 12 years later was largely bloodless, the second phase resulted in a two-day war. At least 70 Pueblo warriors were executed and hundreds of Indigenous men, women and children enslaved.

How are the burning of Zozobra and the Fiestas connected? They’re not, technically; the relationship is best described as a shotgun wedding. Created in the 1920s by artist Will Shuster, Zozobra began as a counter-Fiesta celebration: Shuster thought the Fiestas were too Hispanic and too Catholic. Over the years, however, the event has been absorbed by the larger celebration.

“(Shuster) felt that the Anglo community and Native community were not represented,” said Ray Sandoval, chairman of the Zozobra event. “He wanted to have an event that led into the Fiestas that everyone could participate in.”

Shuster, who moved to Santa Fe from Philadelphia in 1920, became part of the artist collective Los Cincos Pintores. Artists have been relocating to Santa Fe since the turn of the 20th century, and it’s certainly not difficult to imagine a group of inebriated artists sitting in a backyard, enjoying the smell of piñon on the breeze and creating schemes to challenge the establishment. Shuster based Zozobra on a Yaqui ceremony he witnessed in Mexico: an effigy of Judas, loaded with firecrackers and set ablaze. He created Zozobra in his backyard in 1924 — a culturally appropriated, “inclusive,” private fiesta.

“They decided they would hold a counter-fiesta the weekend before,” said Sandoval. “They would burn Zozobra on Friday, they would dress up all their pets, and parade them all around the plaza on Saturday, and then Sunday ended with the historical/hysterical parade, which was to make fun of all the historical re-enactments by the fiesta council. It was a very in-your-face counter-fiesta.”

In the late 1500s, Spanish colonists began settling Pueblo lands, mostly through violent means. In 1598, Don Juan De Oñate led the Acoma massacre, in which hundreds of Acoma died. Afterward, Oñate ordered his men to sever the right foot of every Acoma man over the age of 25, then sentenced them to 20 years of servitude; about 24 men actually suffered amputation. Years later, in 1675, 47 Pueblo Indians were arrested by Spanish colonists and charged with “sorcery.” One of them was a religious leader named Popé, who, upon his release, began planning a rebellion — the Pueblo Revolt of 1680.

“We’d been living with these guys (and) the Spanish did some awful, awful shit,” said Jonathan Sims, a filmmaker and former tribal secretary of Acoma Pueblo. “I don’t think we realized that they were going to stick around that long.”

Under Popé’s leadership, Pueblo freedom fighters expelled the Spanish from New Mexico, as far south as modern-day El Paso, Texas. It took 12 years for the Spanish to return to Santa Fe, led by Diego de Vargas. The event is re-enacted each year during the Fiestas and portrayed as a “peaceful” reoccupation. For obvious reasons, this doesn’t sit well with many Indigenous folks.

There was a time when Native people participated in the burning of Zozobra, but that ended in 1958. This hasn’t stopped Ray Sandoval from reaching out to Pueblo and Native communities, asking people to return to the celebration. But his overtures have been largely ignored.

“For many years, Pueblo dancers danced with fire in front of Zozobra and helped light Zozobra on fire,” Sandoval said. He spoke to me as if addressing the Native community directly: “We want you to come back home to Zozobra. You were there at the inception and you were there from the beginning and we miss you and we need you back.”

“In terms of Zozobra directly, there’s never been any real issue with any of the Pueblos,” said Sims. “Now the Entrada. …” He paused. “We got much larger fish to fry than worry about these guys that like to play conquistador four days out of the year.”

Ever the optimist, Sandoval sees Zozobra as something bigger, separate from the Fiestas. “You don’t lose anything from the story of Zozobra or fiestas by telling the entire story. In fact, the ending is a much more beautiful ending, because you understand the reality and the hardships and the mistakes that were made.”

But how does the story truly get told without Indigenous input? How does one reconcile a word like “reconquest” with the idea of coming together? And how do you get the surrounding Pueblo communities to join in setting a giant papier-mâché marionette ablaze to mark the beginning of the Fiestas?

The politics of the Southwest are messy with competing narratives, intertwined Indigenous, Hispanic and Anglo contributions. Thanks to intermarriage, shared cultures and incredible cuisine, New Mexicans generally get along. However, sparring creation stories continue to complicate relations. Sandoval sees Zozobra as an opportunity to set those stories straight.

Jason Asenap is a Comanche and Muscogee Creek writer and director (and an occasional actor) based in Albuquerque, New Mexico.