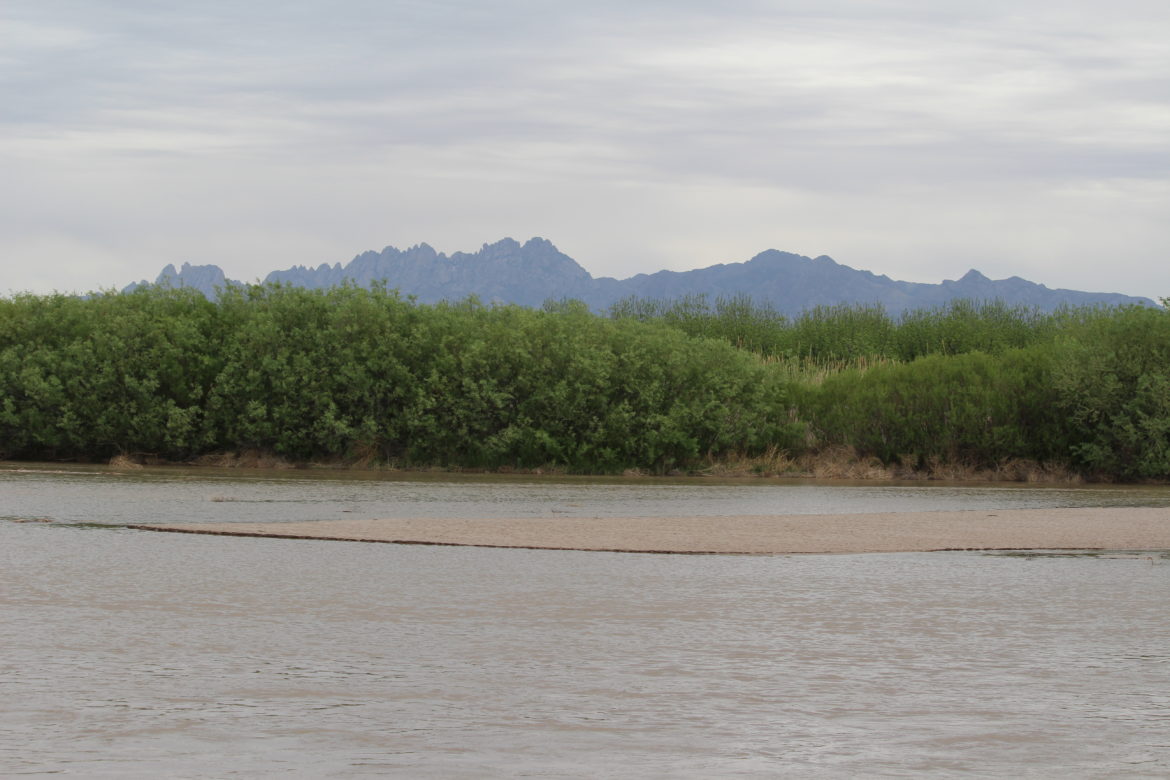 The Rio Grande is flowing in Mesilla, as water is delivered downstream.

As reported by the Washington Post, Udall grilled Pruitt:

Udall, describing Pruitt’s management of the agency as “disastrous,” again called on Pruitt to resign. The former Oklahoma attorney general, he said, has treated his “position of public trust as a golden ticket for extravagant travel and fine dining.”

Irrigators in northwestern New Mexico are worried about the drought, prompting New Mexico State University to offer a workshop on water conservation, according to the Farmington Daily Times. Noel Smith also reports that the filing period has started for Navajo Nation elections. The Carlsbad Current-Argus has an update from the city’s mayor on efforts to remediate the area’s brine well.

It’s a shame that Gannett, the chain that owns six newspapers in New Mexico, has eliminated so many jobs at its rural newspapers, including the Current-Argus. If ever there were a place in need of a few more full-time reporters, it’s southeastern New Mexico, especially given the importance of WIPP, the pending application for a new dump for waste from commercial nuclear power plants and the busy oil industry.

The most recent issue of High Country News is focused on the outdoor recreation industry, and includes a thoughtful essay, “Your stoke won’t save us.”

I’ve spent a lot of my adult life in search of stoke, and like a lot of recreationists, I have implicitly linked my passion for skiing, climbing and running with a passion for conservation and environmental stewardship. But after accepting this premise for most of a decade, I am no longer so sure. Can outdoor recreation really support conservation for the long-term health of the land, not just human access? In the face of the daunting planetary environmental challenges ahead, can stoke really save us? I suspect the answer is a hollow no.

HCN also has a piece from Graham Lee Brewer, “Native superheroes should be drawn from real life.” It’s part of a weekly note from the paper as it’s broadening its coverage of tribal affairs.

The New York Times reports that the state of Alaska, a major oil and gas producer with conservative leadership and two Republican senators, is crafting a climate change plan for the state.

While many conservative-leaning states have resisted aggressive climate policies, Alaska is already seeing the dramatic effects of global warming firsthand, making the issue difficult for local politicians to ignore. The solid permafrost that sits beneath many roads, buildings and pipelines is starting to thaw, destabilizing the infrastructure above. At least 31 coastal towns and cities may need to relocate, at a cost of hundreds of millions of dollars, as protective sea ice vanishes and fierce waves erode Alaska’s shores.

“Climate change is affecting Alaskans right now,” wrote Gov. Bill Walker and Lt. Gov. Byron Mallott in a recent op-ed in the Juneau Empire. “To underestimate the risks or rate of climate change is to gamble with our children’s futures and that is not a bet that we are willing to make.”

-As warming continues, ‘hot drought’ becomes the norm, not an exception, reported in partnership with New Mexico In Focus, where you can watch an interview with Jonathan Overpeck.

-A dry Rio Grande in springtime isn’t normal. But it will be.

-As the primary election approaches, you can go back and re-read our conversations with the four New Mexico gubernatorial candidates on water, energy and climate change. They’re all right here.

New studies New Mexicans can check out this week

“Continental-scale consequences of tree die-offs in North America: identifying where forest loss matters most,” in Environmental Research Letters. Significant forest die-offs have occured in southwestern forests, including the Jemez Mountains, and around the world. The authors of this new study write that while ecological, hydrological and meteorological consequences of these large-scale tree die-offs are being documented, their potential to affect carbon dynamics in other places hasn’t been studied as much. The authors say their new research lays the foundation for identifying how tree die-offs and deforestation in one place can affect other places, too.

“Climate change and drought: from past to future,” in Climate Change Reports. Interested in the interplay between climate change and droughts, the authors look at paleoclimate studies, the historical record and model simulations of past and future conditions. In some cases, they write, “Fingerprints of anthropogenic climate change consistent with long-term warming projections have been identified”—such as in California’s drought—while in other places, it’s still uncertain how much climate change is affecting precipitation declines in other areas, like the U.S. Southwest, Australia and Africa.

Over the next century, projections indicate that warming will increase drought risk and severity across much of the subtropics and mid-latitudes in both hemispheres, a consequence of regional precipitation declines and widespread warming. For many regions, however, the magnitude, robustness, and even direction of climate change-forced trends in drought depends on how drought is defined, with often large differences across indicators of precipitation, soil moisture, runoff, and vegetation health.

The authors also note that societal water demands and water resources management “cannot be treated as extraneous factors in analyses of climate change and drought risk,” adding that the manifestations of drought are affected by both social and physical processes—and “the degree to which droughts can contribute to social disruptions, including conflicts and famines, depends critically on the response and effectiveness of local social and political systems.”

-“The influential role of sociocultural feedbacks on community-managed irrigation system behaviors during times of water stress,” in Water Resources Research. From Sandia National Laboratories, the authors use the Valdez acequia as a case study to examine how a community’s social structure affects its responses to water stresses due to climate change.

If you want to see the data for yourself…

At NM Political Report, we’ve been writing a lot this spring about climate, snowpack, drought, and low river levels.

If you’d like to look at some of the data yourself, or track river levels along your favorite stretches, there are two places you might bookmark:

-The USGS’s New Mexico page for daily streamflow conditions and the streamflow page for 176 river gages in the state.

Thanks to folks who have been sharing their photos on Twitter of New Mexico’s rivers this spring. This week, we saw the San Juan River, the Pecos River (here, too), the Rio Embudo and the Rio Grande near Lemitar.

Add the hashtags #nmwater #nmrivers to your photos, and CC @LauraPaskus so I can retweet them to followers, too.