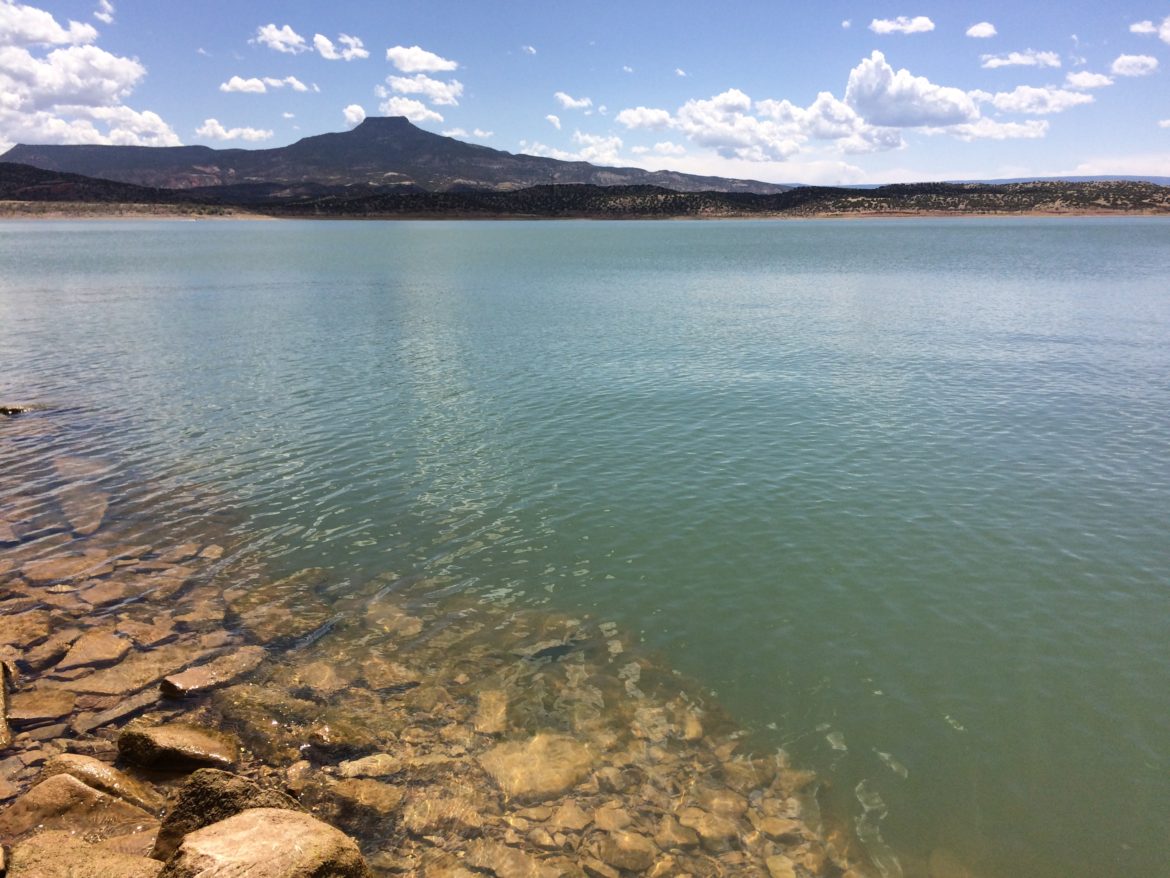 Abiquiu Lake on the Chama River, a tributary of the Rio Grande.

Despite the rains that doused parts of New Mexico on Monday, the state officially entered into drought conditions on the Rio Grande when water levels in two key reservoirs dipped below a critical legal threshold.

On Sunday, New Mexico entered into Article VII restrictions as storage in Elephant Butte and Caballo reservoirs dropped below 400,000 acre-feet. Under Article VII of the Rio Grande Compact, that means Colorado and New Mexico can’t store water in any upstream reservoirs built after 1929.

In the Rio Grande watershed, reservoirs capture and store native Rio Grande water and water piped from northwestern New Mexico via the San Juan-Chama Project. Each drop is earmarked for particular users and managed under the legal strictures of the compact. Elephant Butte and Caballo reservoirs, for example, hold Rio Grande Project water for users in southern New Mexico and Texas. Heron, El Vado and Abiquiu reservoirs on the Chama River store water for cities like Albuquerque and Santa Fe, farmers and the six Middle Rio Grande pueblos. Cochiti Reservoir stores some San Juan-Chama water, but was built for recreation and flood control purposes.

Entering into Article VII restrictions wasn’t a surprise. U.S. Bureau of Reclamation officials have been warning since earlier this year that it would happen, due to the low snowpack and low spring runoff.

“Article VII restrictions are aimed at protecting the water supply of the Rio Grande Project,” explained Reclamation spokeswoman Mary Carlson. “However, with little to no runoff remaining upstream and the most optimistic [National Resources Conservation Service] forecast predicting zero inflow into Elephant Butte Reservoir, conditions on the project are unlikely to change much even with these restrictions.”

The issue merits a close eye given the state’s drought conditions and an interstate lawsuit over the waters of the Rio Grande. Currently, New Mexico is being sued in the U.S. Supreme Court by Texas and the federal government. The two parties allege that by allowing farmers in southern New Mexico to pump groundwater from near the Rio Grande, New Mexico failed for decades to send its legal share of water downstream.

Monsoon storms might provide some relief on the Rio Grande, but water from just one storm, or even several, can’t come close to making up the deficit. Speaking at a water conference last week, Bruce Thomson explained that flows in the Rio Grande are dominated by snowpack and receive little benefit from monsoons.

“Summer precipitation is very nice, but in terms of actual runoff, there is very little actual contribution,” said Thomson, professor emeritus and research professor at the University of New Mexico’s Department of Civil Engineering.

By the time New Mexico entered into Article VII restrictions on May 20, about 20 miles were already dry through the Bosque del Apache National Wildlife Refuge, extending upstream through San Antonio and toward Socorro. Drying began in early April, months earlier than in typical years.

“We are working closely with our partners who have already created two small operational pulses to help the Rio Grande silvery minnow to spawn,” she said. “The most recent appears to have been successful based on early egg detection in the Middle Rio Grande.” She added that the federal government continues efforts to lease all available San Juan-Chama Project water to supplement Rio Grande flows, as well.

Rio Grande at the Alameda Bridge after Monday afternoon’s rainstorm

Combined with a planned release of water at the Isleta Diversion Dam, she said, water from Monday’s storm created a pulse that will help silvery minnows spawn. Crews collect the eggs, then bring them to hatcheries, where the fish are raised and eventually released back into the river.

Article VII will prevent them from storing water, he said, but it’s a “moot point.”

“Mainstem flows out of Colorado have been so low that we have been releasing from storage for the last 3 weeks just to meet [Middle Rio Grande] demand,” he wrote in an email prior to the official Article VII designation. “The runoff has come and gone, and there isn’t enough to store.”

The restrictions could affect the district later in the summer.

“Should we have a wet summer, and flows at La Puente do come up, then we will be unable to store excess water,” he said. La Puente is on the Chama River, above El Vado Dam. “That would be disappointing, but for the most part storing water in the summer is rare anyway.”

Since last Thursday, NM Political Report has been requesting information from the state about the New Mexico Governor’s Drought Task Force, which does not appear to have convened since 2015.

The task force website remains live, though many of its links are broken and the most recent report, with recommendations related to water management, legislation, and agricultural programs, is from 2008. It’s unclear if the state has updated its drought plan from 2006.

According to the website, the task force is chaired by the State Engineer and “includes experts in water, the environment, wildfires, New Mexico recreation, agriculture and health.”

NM Political Report repeatedly reached out to five state officials—three public information officers who work for the Office of the Governor and two employees of the Office of the State Engineer—none of whom responded.

Related story: Given drought and dropping reservoirs, water issues critical for next governor

U.S. Sen. Tom Udall said invoking Article VII this early in the year is a “wake-up call” and a “sign of the ‘new normal.’”

“Rivers like the Rio Grande are under intense pressure right now from climate change and from development,” Udall told NM Political Report. “We need to cooperate to prevent an all-out crisis with water in the West. Everyone in New Mexico has a stake—families, farmers, businesses and leaders at every level of government.”

He added that, as scientists continue to show that surface water supplies are at risk, New Mexicans should treat persistent drought as a fundamental shift in the region’s climate—a shift that will affect the long-term economy, politics and culture of the southwestern United States.

“Right now, we’re working with old water infrastructure and even older water laws—while facing 21st century challenges,” he said. “Many of the changes will not be easy—but New Mexicans know that water is life, and we must face the future together, because we don’t have any water to waste.”

Related story: As warming continues, ‘hot drought’ becomes the norm, not an exception

As drying spreads in the Rio Grande dries—officials anticipate it will dry later this spring or summer in the Albuquerque area—the state’s water issues will become more visible to residents and visitors.

People should remember this is the desert, Carlson said, and New Mexico doesn’t sit on endless pools of underground water.

“Although the water that we save in our daily activities at home, school and work may not immediately impact the Rio Grande this year, we must remember the big picture,” she said. “Our water systems are all connected and overuse of water in some areas impacts the amount of water available in our rivers.”

Lastly, she urged people to visit the state’s reservoirs sooner rather than later.

“Our reservoirs are starting this summer at a good point,” she said. “Although water levels are expected to decrease significantly as the summer goes on, they are all in a good position to provide great recreation for this Memorial Day weekend.”

New Mexico was out of Article VII restrictions from 1978 through July 2, 2002. Since then the state has gone in and out of the restrictions about 20 times, most recently from August 2017 to December 2017.

Note: While rainstorms do add water into the Rio Grande and other river systems, the flows tend to spike and then decline quickly, as readers can see from this series of USGS graphs from three gages on the Rio Grande: the Alameda Bridge north of Albuquerque, near Bosque Farms and in San Antonio, N.M.