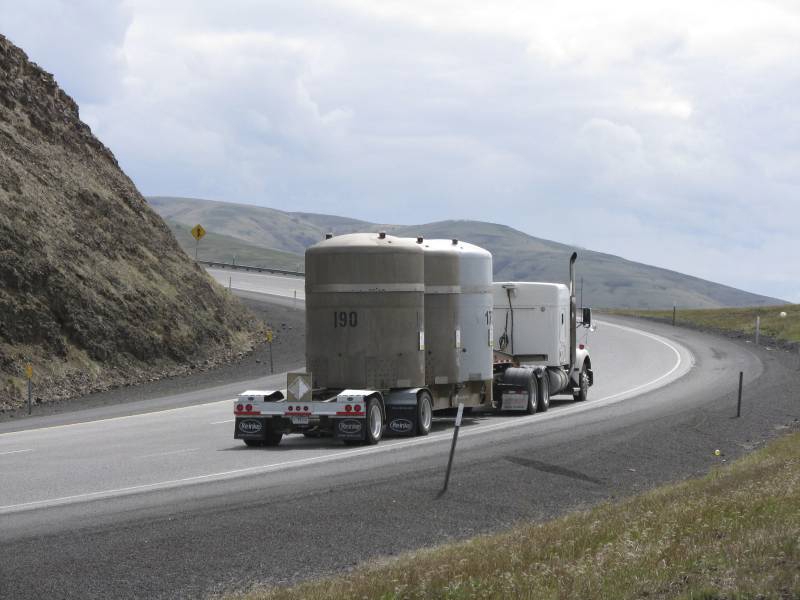 Containers being shipped to WIPP

As the attention of legislators and residents has focused on plans by a private company to store high-level commercial nuclear waste in southeastern New Mexico, changes could be afoot in how transuranic waste from nuclear weapons is managed at the Waste Isolation Pilot Plant, or WIPP.

On June 1, the state of New Mexico is scheduled to decide whether to approve a permit modification request from the U.S. Department of Energy and the Nuclear Waste Partnership, the private company that operates WIPP.

The modification to the permit would create new definitions—describing two different methods for reporting waste disposal volumes—within the permit. If accepted by the New Mexico Environment Department (NMED), it would remove all references to the original language—based on the federal Land Withdrawal Act—limiting the facility’s total disposal capacity to 6.2 million cubic feet. And it would allow the federal government to track waste differently than in the past.

Given how volume is currently calculated under the federal law, WIPP is currently about half-full. If the reporting method for volume were changed—to include only the interior waste containers, rather than the outside layers—WIPP would be considered only about one-third full.

In other words, the changes would allow for more waste to be brought into the underground salt caverns.

He was the original writer of the WIPP permit in the 1990s and supervised NMED’s WIPP program until 2011. Early in her first term, Gov. Susana Martinez prevented Zappe from delivering a planned talk about the role of states in regulating nuclear waste facilities within their boundaries. After providing a draft of his talk to the new administration, he was told to withdraw his attendance at the conference. “This administration was not interested in what I had to say,” he told NM Political Report.

In 2011, Zappe was among the experts at NMED who the Martinez administration abruptly reassigned. He was shuffled out of the WIPP Hazardous Waste Bureau to oversee the food safety program instead. Once eligible to retire, he left the agency.

Retired now for about four years, he still tracks nuclear issues in the state. And earlier this spring, he sent a 7,300-word technical analysis of the proposed permit change to his former agency, opposing the modification.

Broadly speaking, there are two camps when it comes to WIPP, he said, each of which stakes out an extreme position. That’s no different this time. He doesn’t think the state should simply approve the permit request; nor does he think it should be denied. Rather, he sees an opportunity.

NMED should approve the permit, he said, but with significant changes—changes that would allow the state to clarify exactly how volume is calculated, and prevent future attempts to redefine it.

Simply approving the permit request as submitted would “emasculate and render NMED impotent to raise any issues about volume after this,” he said. “The stakes are much higher than people on either side really saw.”

As for plans by the Eddy-Lea Energy Alliance and Holtec International to build an interim storage site for high-level commercial nuclear waste, Zappe said proponents like former Rep. John Heaton, who chairs the alliance, and other local officials in Carlsbad and Hobbs are probably jumping the gun. That’s because under the Nuclear Waste Policy Act, nuclear facilities and utilities—not the U.S. Department of Energy (DOE)—are responsible for storing their waste.

Related story: With no permanent repository for commercial nuclear waste, NM is in the spotlight

“The real issue right now, is where would the money come from if there is no legal basis for DOE to take title of the waste, especially from the currently operating nuclear power plants?” he asked. “And Holtec can’t make the whole thing work by itself from a financial perspective.”

Even if the U.S. Nuclear Regulatory Commission grants Holtec its license, he said, “they’re going to be stuck in limbo until you have a Congress and a president who will change the law to make it happen.”

Having worked with WIPP for 17 years, Zappe considers nuclear waste storage and the transportation of waste “relatively benign.”

“As far as nuclear facilities in the state, I believe it is very important—especially as it comes to waste, as well as things like air quality, water quality—that the state have some meaningful role in the regulation and oversight of these facilities,” he said. “If the state does not have a meaningful role, then the public has the right to be alarmed.”