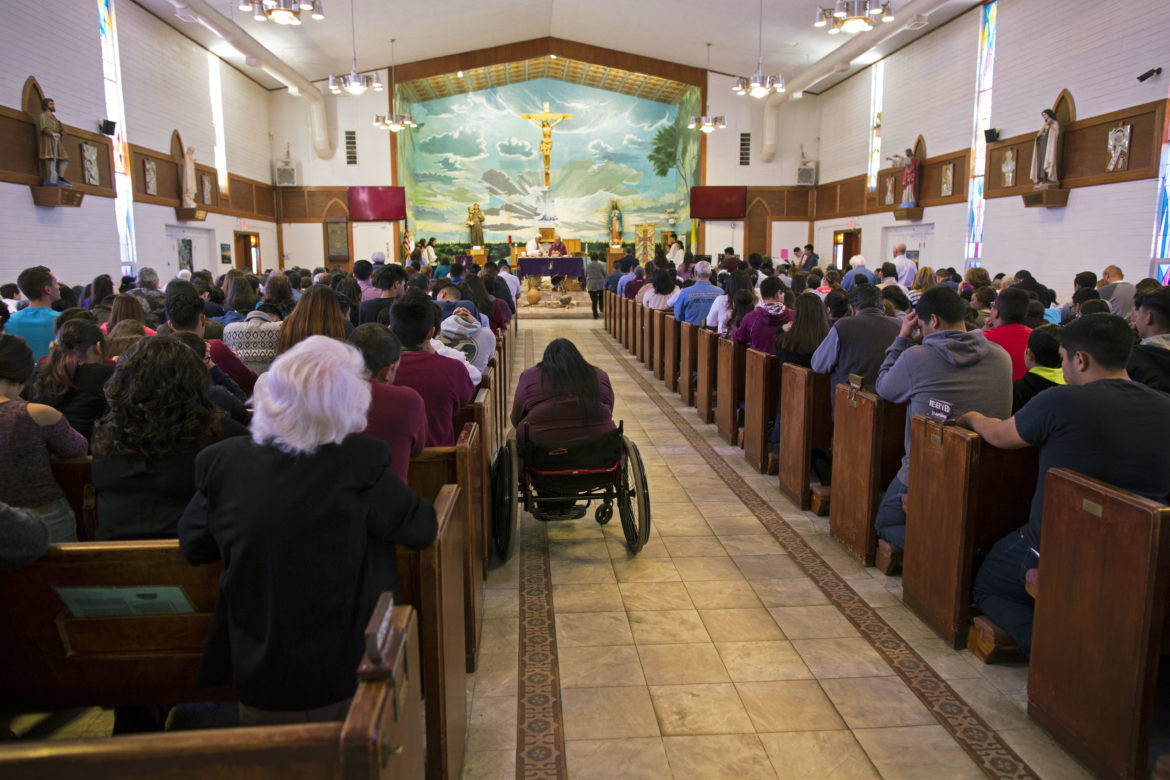 It has all the blessings and all the curses of a small town — with a borderland twist.

This close-knit, largely Spanish-speaking community is a place where many families have deep roots, and newcomers — mostly Mexican immigrants — are bienvenidos. The schools are good. The streets are generally safe, especially since the city incorporated in 2010 and got its own small police force. People here say it’s a nice place to raise a family.

But Anthony, paradoxically, presents some of the highest risks to infants and young children in a state that is already at rock bottom of the national barrel on child well-being. By the state health department’s reckoning, it’s the third-worst place in New Mexico to be a child.

The risks reveal themselves at home, behind closed doors.

Half of children live below the federal poverty line. So many go hungry at home that area schools serve free breakfast and lunch to nearly all students. Regional unemployment hovers near 15 percent, more than triple the national rate. Poverty contributes to high rates of teen pregnancy and inadequate prenatal care. The majority of 911 calls are for domestic violence.

The area has never fully recovered from losing hundreds of good-paying factory jobs that disappeared in the era of globalization following NAFTA. Yet, Anthony’s low-wage agricultural economy is a source of both pride and poverty: pride because many local families have a tradition of working the land; poverty because the work is seasonal and underpaid.

The heart of the town is St. Anthony’s Church, where the pews overflow on Sundays and a mural depicts dawn breaking over a great river reminiscent of the Rio Grande. There in the back sits Mayor Diana Murillo-Trujillo, 45, her long, straight black hair brushing the edge of her red and black wheelchair.

Everyone at St. Anthony’s knows the mayor; she has attended weekly Mass here since she was 3 years old.

On a recent Sunday morning, as she teaches a confirmation class to 20 teens and their sponsors, the smells of menudo, egg-and-chorizo burritos and coffee fill the parish hall.

“What I love about Anthony,” she says, “is that when something happens, everyone unites.”

Murillo-Trujillo is talking about the city, but she could just as easily be talking about her own family. Here in Anthony, where the median income is less than $23,000 a year, poverty is a fact of life, and the mayor’s family has survived by sticking together. Even today, the mayor lives on $28,000 a year: the $14,000 she earns from her job with the city, and another $14,000 she makes working weekends at a fireworks store.

The church is where Murillo-Trujillo got her start in civic activism. She became a city trustee in 2010 and served in that position for six years. In 2016, she was elected mayor on two campaign promises: to do something for the economy and to build a place she had dreamed of ever since she was a little girl.

A place for children to play.

A past of poverty, misfortune

Even before her election, Murillo-Trujillo was a well-known figure in Anthony, population 9,330.

From the late 1990s, she was “the Burrito Lady,” known to truckers from California to Florida for the carne guisada and chile relleno burritos she sold at a bustling truck stop on the Lone Star side of the state line. That is where Murillo-Trujillo, while earning a Bachelor’s degree in government from New Mexico State University, was working when she was hit by a drunk driver in 2001 and became paralyzed from the waist-down.

She had already survived a childhood marked by hunger, tragedy and silence before the accident nearly took her life. A history of hardship ran through her family.

Her mother arrived from the Mexican state of Chihuahua at 15 and eventually met Murillo-Trujillo’s father. He was deaf and mute, but together they provided for their family — he working at a ranch and a dairy, she cooking at a variety of small restaurants.

They were poor but they had enough.

Then came, as Catholic activist Dorothy Day wrote, the “sudden plunge into destitution.”

When Murillo-Trujillo was 4 years old, her 19-year-old brother was murdered. Stricken with grief, her mother all but stopped speaking for five years. The house fell silent. And then tragedy struck again, when a dairy cow fell on her father and disabled him.

“We went into poverty, like complete poverty,” Murillo-Trujillo says.

It is summer 2017, and Murillo-Trujillo is sitting with her 88-year-old mother, 23-year-old daughter Delilah and four grandchildren in the living room of their trailer — the same spot where the mayor herself grew up.  At the moment 10 people are sharing the mobile home — six adults and four children — thanks to a son’s lost job, a daughter’s divorce and a cycle of poverty that seems to relent only to strike again. Upheaval is often the norm.

Family photos and a framed Virgin of Guadalupe cover the tangerine-painted walls. Babies are toddling and crawling around a wood coffee table. At lunch time, everyone takes turns at a kitchen table big enough for four.

“Remember when you would give me latas de Campbell’s soup, one a day?” Murillo-Trujillo prompts her mother, whose memory is failing. “That is how poor we were. And she would send me to school with the same pair of pants and shirt, come home, wash it and I would use it the next day.”

Delilah recalls her own childhood in the same mobile home. There were happy times, she says, like playing in the dirt at the Pilot Flying J truck stop and the cashiers spoiling her and her siblings with candies and other treats. She was 6 when the drunk driver struck her mother.

“Before my mom’s accident, yeah, we had everything,” she says. “My mom, she was down for about two years, but she always got back up, even when she was still learning how to be disabled and learning how to provide for her kids.

“Even at the time, I felt we couldn’t afford nice clothes or sometimes we didn’t have enough food at the house,” she says. “We always had what we needed but not always what we wanted.”

Now a mother herself, Delilah works at a Denny’s at the Flying J, the site of her mother’s accident. She says she doubts she’ll ever be able to provide her kids with a better life than the one she had.

“Right now, I feel like being here I can’t,” she says. “I feel like I’m struggling to give them the best life.”

El Paso, Texas, is known as “the Ellis Island of the Southwest” — a place where millions of immigrants first set foot in the United States of America.

The city with the electric star on its mountainside was a crossing point for workers under the Bracero Program, which began in 1942 and provided guest worker visas for temporary laborers on nearby farms and ranches. The city was a beacon throughout the 1970s, ’80s and early ’90s, when the U.S. border agents ignored the illegal-in-plain-sight raft rides across the Rio Grande, under the international bridge.

And if El Paso is “Ellis Island,” then Anthony is akin to what once was Manhattan’s Lower East Side: a neighborhood where newcomers could set down roots among their own, while holding onto their language, food, religion and culture. Nearly everyone here can trace their roots to Mexico. Ninety-one percent speak a language other than English at home, according to the U.S. Census; in Anthony, it’s Spanish.

In many ways, despite its proximity to the 18-foot steel border fence and ever-present Border Patrol, Anthony is as welcoming to immigrants today as it was two decades ago. The period of intense drug violence in Ciudad Juárez between 2008 and 2012 drove a new wave of immigrants to the area, some who stayed without permission.

But for those born or raised here, success — be it higher education or employment — often means leaving home behind.

“Are those people ever going to come back? No,” says Jerry Pacheco, president of the Border Industrial Association in the nearby industrial zone of Santa Teresa. “What you get are the people that stay living in that cycle of poverty.”

The decade after the 1994 NAFTA accord saw the exodus of factory work. First the Alpo dog food cannery closed in nearby Chamberino, N.M.; then came the shutdown of the Old El Paso salsa plant in Anthony, Tex., followed by the closure of an electric products manufacturer. The indoor jobs with decent wages and benefits — a godsend to workers in Anthony, where 42 percent of residents lack a U.S. high school degree — dried up.

The city’s economic woes have intensified its most pressing social issues: single parenthood, teen pregnancy, domestic violence, alcoholism and, increasingly, and drug use.

A majority of babies — 58 percent — are born to unmarried mothers. Forty-four percent of mothers receive less than adequate prenatal care, according to the state Department of Health. The teen birth rate is 2.6 times the state average.

A third of all mothers are single.

“It’s almost like a break in the links of strength in our society,” says Esther Peregrino, a home visitor with a New Mexico State University Head Start program in Anthony.

The top 911 calls are for domestic violence, according to Anthony police. Chief Adrian Flores explains: “There is a lot fighting about money. It’s the economic stress of life in Anthony.”

“We do have a problem here,” acknowledges Murillo-Trujillo. “Está el machismo. We have a lot of men who think that women aren’t supposed to be independent or have a voice.”

On a whiteboard in the mayor’s office is a sketch of the recreation area she envisions for Anthony: a new basketball court to replace the dilapidated one, new soccer and baseball fields, a jungle gym and picnic area. It’s a small wish list.

“We want a safe place where kids can go play,” she says.

The city’s schools, on the other hand, offer an oasis, a few safe spaces for outdoor play and an education that could be a ticket out of poverty.

Anthony Elementary is a Blue Ribbon school in the Gadsden Independent School District. University pendants hang on the walls to telegraph a message: Aim high.

The school has drastically improved student test scores and overall school grades. Gadsden, which is one of the state’s fastest-growing districts, boasts an average graduation rate of 80 percent, surpassing the state average of 68.8 percent over the last four-year period.

“Obviously the kids have problems,” says Principal Linda Perez. “Obviously the kids live in poverty. But once they step in here, we forget about all that. Because if we don’t, and we pity them — and say, ‘pobrecito, he’s sad, his mom is in jail’ — then we are not teaching the kids.”

The district was an early adopter of a state-funded preschool program shown to improve kindergarten readiness. Last year, it was held up as a model district by Think New Mexico, a Santa Fe think tank, for its commitment to putting resources in the classroom, not administration.

Working to get a playground

Murillo-Trujillo, for her part, says she is keeping her focus on the issues that swept her into office.

She has worked with the Border Industrial Association, helping to sponsor industrial revenue bonds that brought two large businesses to the border hub of Santa Teresa 16 miles away.  She says she is working to annex land along Interstate 10 to attract new businesses to town.

And that long-promised playground and recreation area? After two years in office, Murillo-Trujillo has secured $100,000 in state funding toward the roughly $300,000 needed. The basketball court, baseball field and playground renovations are underway.

“I know if we bring all these resources to Anthony, our families will stay,” she said. “Like my kids — my kids don’t want to leave. They want to stay and raise their kids. I want to stay here. Here everybody is family.”