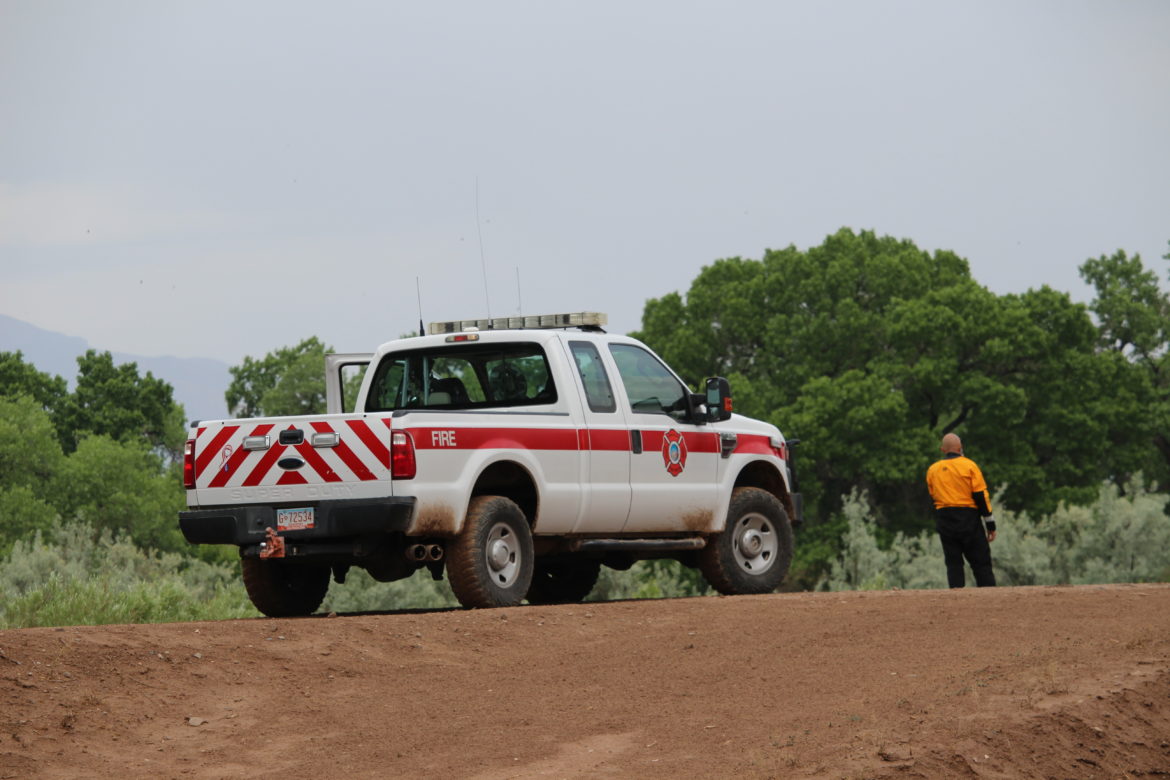 The big news this morning is the Ute Park Fire in northern New Mexico near Ute Park and Cimarron, which blew up overnight to 8,000 acres. According to the New Mexico State Forestry update at 7:30 this morning, 12 structures at Philmont Scout Ranch were destroyed, and 150 other structures are threatened.

As of Friday morning, Highway 64 is closed between Eagle Nest Lake and Cimarron and State Route 204 is closed at Cimarron. There are evacuation centers at the Eagle Nest Senior Center, Cimarron Elementary/Middle School and the Raton Convention Center.

To receive our NM Environment Review email each Thursday morning, sign up here.

-Last Thursday night, underground workers at the Waste Isolation Pilot Plant (WIPP) were evacuated when they realized a drum of nuclear waste was misaligned within its outer pack. The facility’s emergency operations center was activated, “purely as a precautionary measure,” said Donavan Mager, communications director for Nuclear Waste Partnership, the U.S. Department of Energy contractor at WIPP.

“There was never any danger to our employees, the public or the environment,” he told NM Political Report. While waste was being moved to the disposal room, before being emplaced permanently below-ground, workers noticed a 55-gallon drum was leaning out a little within the plastic packaging that holds drums into “seven packs.” Donavan added that the facility doesn’t know if the shifting occured at the generating site, during transportation or at WIPP; that’s under investigation, he said. Currently, waste is shipped from two sites: Oak Ridge National Laboratory in Tennessee and Idaho National Laboratory.

-Wild Watershed, an environmental group, sued the U.S. Forest Service in federal court this month to halt a forest thinning and prescribed fire project on 2,000 acres in the Santa Fe National Forest near Hyde Park and along the road to the Santa Fe Ski Basin. In their complaint, the group and two individuals allege a earlier decision by the federal government is “arbitrary and capricious.” According to the group, the Hyde Park Wildlands Urban Interface project—which is within a 30,000 acre proposed addition to the Pecos Wilderness—would destroy the Hyde Park area’s potential to someday become designated wilderness.

-As we reported last week, national forests throughout the state have various fire restrictions in place. As of 8:00 a.m. on Friday, June 1, the Santa Fe National Forest will be closed due to fire dangers and acute drought conditions. The closure prohibits all recreational activities, except for within the Rio Chama Wild and Scenic River corridor, which is under Stage 2 fire restrictions. The closure will remain in place, forest officials said, until the “forest receives significant moisture and conditions have improved.”

-There are fire restrictions on all state lands, too. Smoking, fireworks and campfires are prohibited (and flaring of natural gas is, too). According to the New Mexico Energy, Minerals and Natural Resources Department, unless flaring is necessary for safety purposes it can’t be done on National Weather Service-designated “red flag days” or when winds are 25 mph and above. Exceptions can be made under certain circumstances. For more information: http://www.emnrd.state.nm.us/SFD/

-At NM Political Report, our recent environment stories include: Restrictions in force as wildfire dangers rise in NM’s forests, and two stories about nuclear waste issues in the state: With no permanent repository for commercial nuclear waste, NM is in the spotlight and New Mexico to decide this week on WIPP permit changes. We’ve also got a few stories from our partners, too: Tribal nations hold some of the best water rights in the West from Emily Benson at High Country News and NM renewable energy group awaits conflict-of-interest decision by Roz Brown at Public News Service.

-Anxious about Tuesday’s primary election? I don’t blame you! We’ll be covering results from statewide races, including State Land Office Commissioner, next Tuesday night on our homepage and Twitter. If water, energy and climate issues are important to you, check out our interviews with the four gubernatorial candidates on those issues.

-As more people head out to camp this spring and summer, it’s a good time to remember good bear etiquette. The New Mexico Department of Game and Fish warned campers in the Jemez Mountains (near Forest Road 376) to be aware of increased bear activity, and one camper was bitten in the Gila National Forest.  Game and Fish offers the following suggestions:

-Keep your camp clean, and store food and garbage properly at all times. Use bear-proof containers when available. If not, suspend food, toiletries, coolers and garbage from a tree at least 10 feet off the ground and 6 feet out from the tree trunk.

-Keep your tent and sleeping bag free of all food smells. Store the clothes you wore while cooking or eating with your food.

-Sleep a good distance from your cooking area or food storage site, 100 yards is recommended.

-I haven’t yet looked into this, and saw the press release only because Rep. Steve Pearce Tweeted it Wednesday afternoon, but U.S. Department of the Interior Secretary Ryan Zinke announced new recreation trails, including two in New Mexico: The three-mile Climax Canyon Nature Trail in Raton and the 100-mile Guadalupe Ridge Trail, which starts in Texas.

-Lastly, it’s not a New Mexico-based story, but I love Melissa Hart’s new essay in High Country News, A bird’s song adds wonder to the world. At my home in Albuquerque, two of my favorite birds to hear are busy curve-billed thrashers and inquisitive lesser goldfinches. And whenever I return to New England, I know I’m home by the sounds of blue jays and cardinals. Hit me up on Twitter with your favorite birds and bird songs.