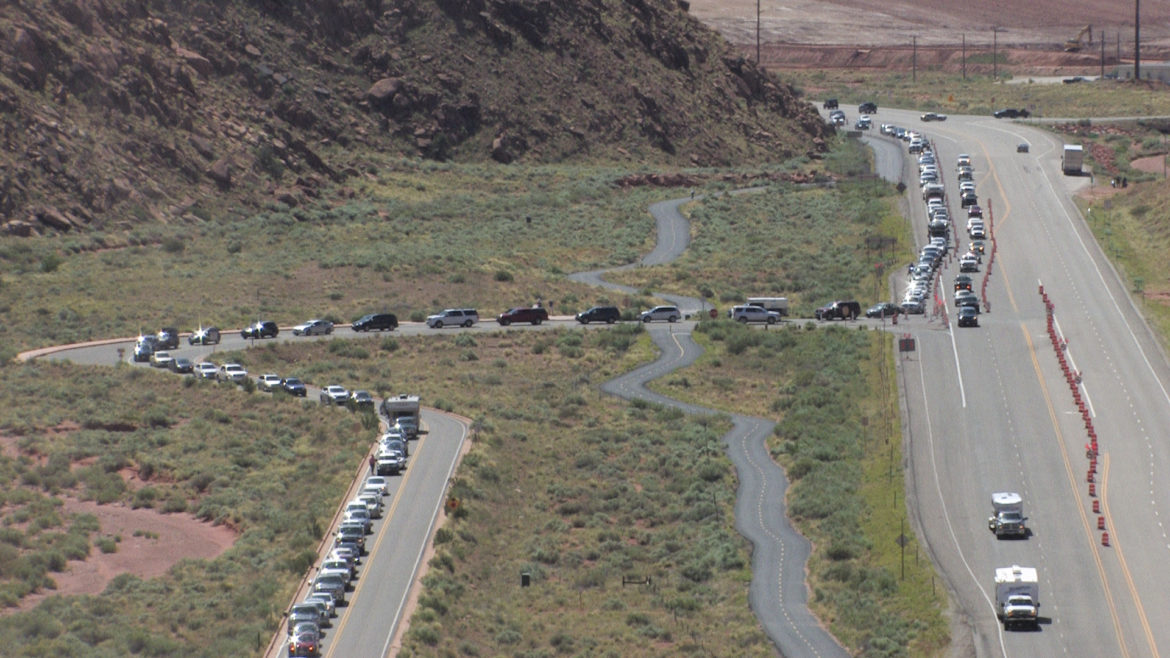 The Arches National Park entrance road backed up onto US 191 on Saturday, May 28, 2016. Wait times often exceeded an hour.

National parks have been a centerpiece of America’s tourism culture since the late 19th century, after the colonialization and displacement of many of the Indigenous people of the West. But recently what’s been called “America’s best idea” has a new label: “loved to death.”

Last year, about 330 million people visited the parks. That’s roughly 5 million more visits than the total U.S. population and almost 50 million more visits than in 2012. While visitation has increased, staffing levels have declined and the costs of overdue park infrastructure projects have ballooned to around $12 billion. As the national parks’ summer high season begins and the understaffed Park Service works to keep them clean and safe for the crowds, politicians are fighting over how to pay for the parks.

Interior Department Secretary Ryan Zinke has floated several proposals to increase funding for national parks. In October 2017, the National Park Service proposed significantly increasing admissions prices to popular parks; after uproar from the public and lawmakers, the agency backed off. Still, the cost for most national parks that collect entry fees will increase by between $5 and $10 starting in June.

The other proposal to increase funding for parks and address the expensive maintenance backlog pairs funding with energy development on federal lands. As part of the Trump administration’s infrastructure plan, the executive branch has asked Congress to create an $18 billion “Public Lands Infrastructure Fund” for the Interior Department. This plan would take half of the royalties from expanded drilling and mining on public lands and put them towards the maintenance of park infrastructure. The plan has broad support from Republicans and the support of some Democrats. But the proposal has also been met with stiff opposition in the environmental community, who have decried the plan as an attempt to increase the sell-off of public lands to fossil fuel companies.

Meanwhile, budget negotiations could result in cuts to staffing. Congress rebutted last year’s attempt to decrease funding for the National Parks, but cuts in the proposed president’s budget request for 2019 would pencil out to 2,000 fewer “full-time equivalents” (FTE’s) in the National Park Service than there were in 2017. Full-time equivalents can mean a single permanent full-time job, or several seasonal workers, so those cuts could actually mean the loss of more than 2,000 employees. The job losses proposed in the 2019 budget would be on top of the more than 2,000 full-time equivalents that were cut from the agency between 2011 and 2017.

Staffing cuts impact park maintenance as well. When there aren’t enough employees, workers have to “triage to ensure the best experience for park visitors and take care of visitor safety,” says John Garder, the senior director of budget and appropriations for the nonprofit National Parks Conservation Association. He says employees get pulled away from the jobs they were hired for, like trail maintenance, to do more pressing tasks like crowd control on busy days. With employees juggling tasks to keep visitors safe and improve their experience, “it only makes the maintenance backlog worse,” Garder says.

New guidance from the Interior Department’s Office of Personnel Management for seasonal hiring, implemented this spring, has complicated the hiring process. For years, seasonal employees have been able to return to their old jobs through a non-competitive hiring process, allowing people to rotate between seasonal positions at different national parks. Now, seasonal employees are only eligible to return to their old jobs without going through the normal hiring process if they have worked less than 1,040 hours for the Park Service in a given year. The new guidance for hiring practices, which was put in place after a 2016 audit found hiring procedures didn’t follow federal labor laws, could open the door for hiring more diverse employees. But its rollout, which was piecemeal, slowed the hiring process this spring.

Over the busy Memorial Day weekend, visitors to parks around the West — from Yellowstone to the Grand Canyon — told High Country News that staffing levels in national parks weren’t enough to serve the holiday crowds.

No Park Rangers at stations in Joshua Tree. One was on lunch, another kiosk was closed. Second time I couldn’t even pay in two weeks- no staff to even pay for entrance.

Joshua Frank, a journalist living in Long Beach, California, experienced the short staffing firsthand. In two trips to Joshua Tree National Park this May, he was greeted by an unfamiliar sight in his ten years of visiting the park: empty kiosks and unattended information centers during regular daytime hours. Frank says that he couldn’t find anyone to take his entrance fees on Memorial Day weekend. “There’s a visible lack of staff, even on a holiday weekend,” Frank says.

Carl Segerstrom is an editorial intern at High Country News.