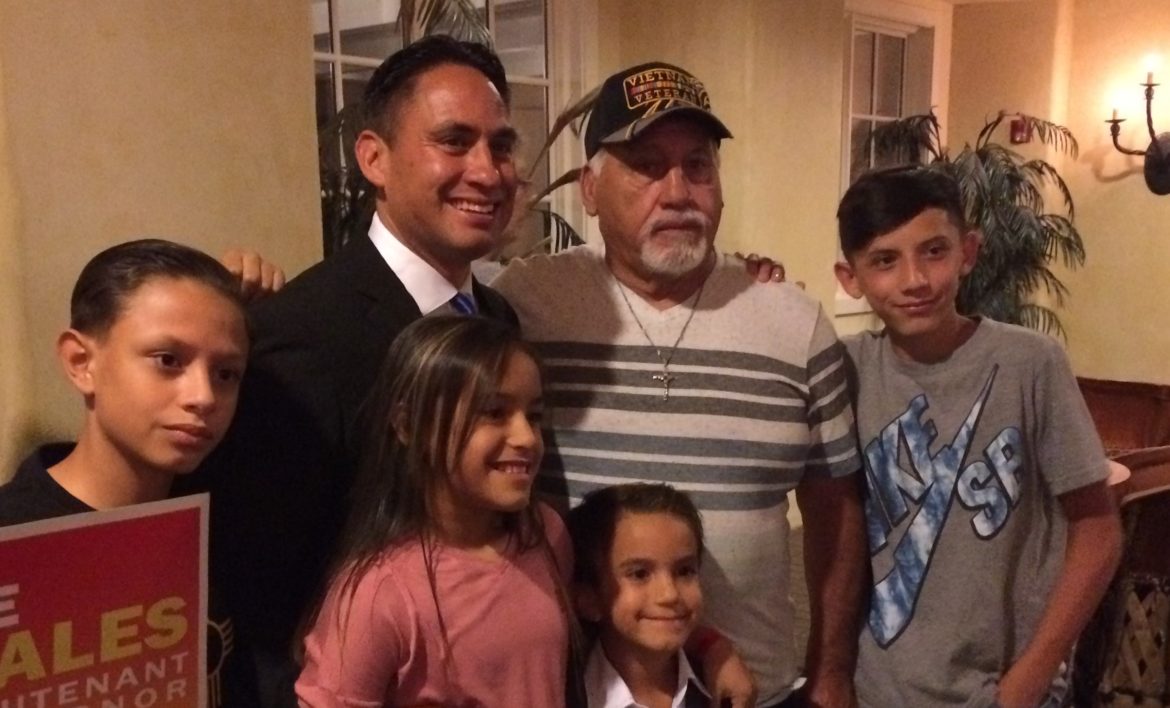 “It’s going to be a nail-biter,” Garrett VeneKlasen said, early in the night as he and fellow Democrat Stephanie Garcia Richard were neck-and-neck in the race for New Mexico State Land Commissioner.

And indeed it was, as the two traded the lead throughout the night, with Garcia Richard, a state representative, pulling ahead as the final results from Bernalillo County came in late Tuesday night, giving her a two percentage point lead over VeneKlasen. Despite a last-minute ad campaign, state Sen. George Muñoz finished almost 15 percentage points behind the two front-runners.

In November’s general election, she will face Republican Pat Lyons, who previously held the office for two terms, from 2003 until 2010. A rancher, Lyons currently represents District 2 on the Public Regulation Commission.

If she wins the race, Garcia Richard said she plans to “transform the office,” and lead a “just transition from oil and gas to renewable energy.”

Conceding the race shortly before 11 p.m., VeneKlasen offered his support to Garcia Richard.

“We need a new land commissioner who will bring that agency into the 21st century, and I think Stephanie can do that,” he said. “Our issues, our platforms are very similar, and if she wants me to help her, I will be happy to help her. I will stand behind her.”

Though clearly disappointed, VeneKlasen said he was proud of what his campaign accomplished. “We’ve elevated this obscure, but super important agency and brought it into the public’s eye,” said VeneKlasen, who is executive director of the New Mexico Wildlife Federation. “This is as important as the governor’s race.”

“The whole purpose that I got into this race…was I wanted to make sure we had the strongest ticket possible because the most important goal is to win in November,” he said. “We’ve had a Democratic majority Senate and a Democratic majority House, but we’ve seen the destruction that’s taken place when we haven’t had the executive [office] under the Democrats.”

Morales, who lives in southwestern New Mexico, said he looks forward to working together with gubernatorial candidate Michelle Lujan Grisham to “have the change in New Mexico we so desperately need.”

In November, Colón will be facing a past rival. In 2017, Republican Wayne Johnson and Colón were among the candidates running for Albuquerque mayor. After Tim Keller won and vacated his position as State Auditor, Gov. Susana Martinez appointed Johnson.

Colón said he was looking forward to the race against Johnson: “I think a Democratic wave is coming,” he said.

Colón also said that as State Auditor, his initial priority would be to evaluate the current structures and resources of the office. “Governor Martinez decimated the auditor’s office—it’s seen a 10 percent reduction [in funding] in four years,” he said. “The reason for that, is she didn’t want the auditor looking over her shoulder. Those days are over.”

U.S. Senator Martin Heinrich was among those at VeneKlasen’s election night event in Albuquerque.

Heinrich added that there is fatigue with the current governor and the current president. But he said there is hope on the horizon.

“We’ve had a lost eight years—eight years of not seizing opportunity because we didn’t have that leadership in the governor’s office,” he said. “We’re going to have an incredibly majority in the statehouse now, and I believe we’re absolutely going to win the governor’s race, and we’re going to be able to make up that lost time on education, on early childhood education, on renewables and on a whole series of fronts.”