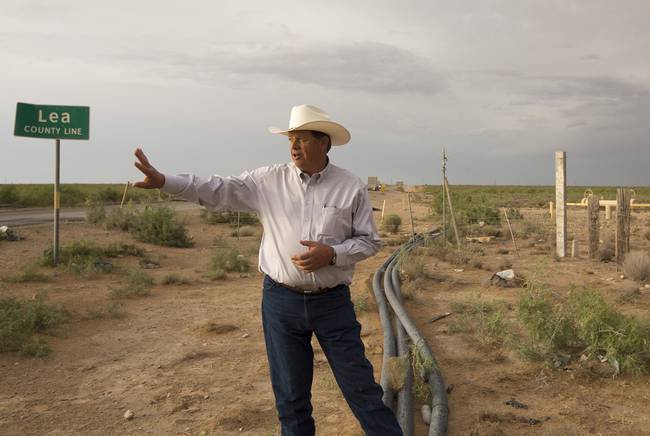 ORLA, TEXAS — After you head northeast on Ranch Road 652 from tiny Orla, it’s easy to miss the precise moment you leave Texas and cross into New Mexico. The sign just says “Lea County Line,” and with 254 counties in Texas, you’d be forgiven for not knowing there isn’t one named Lea.

But the folks who are selling water over it know exactly where the line is.

That’s because on the Texas side, where the “rule of capture” rules groundwater policy, people basically can pump water from beneath their land to their heart’s content. But on the New Mexico side, the state has imposed tight regulations on both surface and groundwater that restrict supply.

Here’s the rub — or the opportunity, depending on your perspective: With an oil fracking boom driving demand for freshwater on both sides of the state line in these parts, Texas landowners are helping to fill the void with water from the Lone Star State — including from at least one county in which Gov. Greg Abbott has declared a drought.

Now a top New Mexico politician is crying foul, saying that unregulated pumping from wells next to the state line is depleting the shared aquifers that supply water to southern New Mexico.

“Texas is stealing New Mexico’s water,” said New Mexico State Land Commissioner Aubrey Dunn. “If you put a whole bunch of straws in Texas and you don’t have any straws in New Mexico, you’re sucking all the water from under New Mexico out in Texas and then selling it back to New Mexico.”

The difference in ownership of land in the two states contributes to the divergent water policies. In Texas, more than 90 percent of the land is privately owned. In New Mexico, by contrast, only 43 percent is owned by individuals, while 57 percent is in government or tribal hands.

Dunn says he has already found at least seven unpermitted water lines snaking from Texas across state trust lands he oversees, and he believes millions of gallons a day are being pumped into his state for use in oil and gas exploration.

The commissioner, who oversees 9 million surface acres of state trust lands, said he has quit issuing new fresh water well permits for the oil and gas industry on agency-supervised property, but he can’t stop the pumping in Texas. And experts say there is no law barring unlimited sales of Texas water to New Mexico buyers — making the transfers hard to quantify.

“Water is a vested property in the state of Texas. There is no law that I know of that prevents it from being shipped over state lines,” said state Sen. Kel Seliger, R-Amarillo. “It is less important where the water goes, as long as the owners are compensated, I suppose, than what the plans are to see to it that we have a water supply in perpetuity.”

It’s a bipartisan sentiment. State Rep. Poncho Nevárez, the Eagle Pass Democrat who represents the far-flung outpost of Pecos in neighboring Reeves County, said he’s not so worried where the water goes as long as there’s enough to go around for residents and the towns they live in.

“What does it matter if it goes 5 feet across the county line or to the moon?” Nevarez said. “I could see the pushback if Pecos proper was having trouble getting water, and here you have these guys moving massive amounts of water to New Mexico … you gotta take care of the people where the resource generates from first.”

When it comes to ensuring future supplies for the locals in Texas, lawmakers note that communities can always band together and form groundwater conservation districts, which issue pumping permits to protect aquifer levels. But here in Loving County, which is part of both Nevarez’ and Seliger’s sprawling districts and sits adjacent to Lea County, New Mexico, there is no water conservation district, according to maps published by the Texas Water Development Board. (Abbott recently put Loving County on the list of counties seeking federal drought assistance).

Texas rancher Roy “Sonny” Lindsay owns Loving County property that sits along the state border near Ranch Road 652, and he’s seen plenty of water heading north to New Mexico — where locally sourced water is harder to obtain. He recently sold some of it himself to ConocoPhillips from a giant frac pit — used to store water in the drilling process — the company built on his land. The company then pumped the water through hoses running into New Mexico, he said.

“If it wasn’t for Texas water, New Mexico wouldn’t have no oil production,” Lindsay said. “So they shouldn’t gripe about us selling water over there.”

“At the time, we could not source water from New Mexico because other operators had captured the full capacity of the water available from sources (third party water vendors) in New Mexico,” Hinojosa said. She didn’t know the “exact volume” of water sent over the state line but said it was less than 5 percent of the water the company used in the Permian Basin in 2017.

“At this time, ConocoPhillips is not using Texas water in New Mexico,” Hinojosa added.

Lindsay said ConocoPhillips isn’t the only company that has piped water into New Mexico over his land. He said he recently discovered a water line from Texas Pacific Land Trust, a highly profitable company whose water sales have exploded in recent years, going over his land into New Mexico. He found another line lying alongside Ranch Road 652 whose owner could not be determined. Nor was it clear who owned several hard plastic lines — or what they were being used for — stretching across the state border near a wastewater facility not far from the Lea County Line sign.

Phone and email messages left for Texas Pacific Land Trust, a 130-year-old company that owns almost 900,000 acres of land in 18 Texas counties, were not returned this week.

Meanwhile, a Houston-based water supply company, Solaris Water Midstream, announced Tuesday that it is building a pipeline that will soon deliver millions of gallons of water per day from parched West Texas to New Mexico to help alleviate what the CEO described as “limited sources of water” constraining fracking operations in the region.

“The high-capacity pipeline will add crucial, permanent water supply infrastructure to one of the most prolific areas in the Permian Basin and will be capable of transporting approximately 150,000 barrels [6.3 million gallons] of water per day from Loving County, Texas, to Eddy County, New Mexico,” the company said. Solaris spokeswoman Casey Nikoloric said the company works closely with area landowners to ensure “all permits are in place and easement fees are paid.”

The heavy cross-state water sales come amid an unprecedented fracking boom in the northwestern Texas counties near the New Mexico border.

Fracking, short for hydraulic fracturing, uses enormous quantities of water, which drillers pressurize and shoot deep below the surface to help separate shale oil from porous rocks. In remote West Texas counties like Loving and Reeves, water lines zigzag between frac pits — above-ground pools lined with plastic — that dot the horizon. The drilling frenzy has filled hotels, torn up roads and boosted oil company profits all over the Permian Basin.

But oil isn’t the only liquid landowners are turning into quick cash. Suddenly, ranchers who once coaxed cotton out of the desert are finding their water is more valuable than the crops they once irrigated with it.

“There’s a lot of individuals that have sold a million dollars’ worth of water,” said Paul Weatherby, former general manager of the Middle Pecos Groundwater Conservation District. He said he’s not bothered that some of it is being sold in New Mexico.

Still, water and how it’s used can be a touchy subject around here. In the early 1950s, a crown jewel of Fort Stockton — Comanche Springs — dried up amid heavy pumping by farmers, most famously Clayton Williams Sr. An ensuing court battle reaffirmed the landmark 1904 decision upholding the “rule of capture” — giving landowners broad control over the water under their property — and Comanche Springs never recovered.

Williams’ son, Clayton Williams Jr., who lost the 1990 governor’s race to Ann Richards, later rattled Fort Stockton with a plan to pump his water from the rural area to thirsty cities like Midland and Odessa. The battle dragged on for years, culminating in a 2017 settlement that allows for limited water exports.

Tangling over water with New Mexico isn’t new, either — particularly when it comes to the Rio Grande and Pecos Rivers. A battle over distribution of water from the Rio Grande recently went to the U.S. Supreme Court, where Texas claimed a preliminary victory in March in an ongoing water war.

In this new water-war battlefront, the New Mexico land commissioner argues that the rule of capture should not allow one state to negatively impact another’s aquifer. Dunn also is trying to determine if the landowners and companies selling water in New Mexico are paying taxes on it as required.

Robert McEntyre, spokesman for the New Mexico Oil & Gas Association, said his members believe in robust compliance with all regulations and tax laws.

“If we’re running lines across state trust lands or federal lands, we should have the proper permits, and the proper taxes should be paid. I don’t think anyone is contesting that,” he said. “But I do think it would be irresponsible for the land commissioner to paint the entire industry with a broad brush over what seems to be a handful of cases.”

Dunn says he worries about the long-term impact of pumping so much groundwater for use in oil and gas extraction. That pumping lowers the amount of water that feeds rivers and streams, he said.

“You’re taking a resource that’s not really rechargeable, and using it,” Dunn said. “I think in the long run water is going to be more valuable than oil.”

Midland veterinarian Michael McCulloch, who owns land in both Texas and New Mexico and advocates for water conservation, said it’s the disharmony in interstate water law that’s helping to deplete the land’s most precious resource.

“We need to think about how this is going to affect our kids and grandkids down the road,” McCulloch said. “It does bother me a little bit that New Mexico regulates how much water I can use, but it would be nice if we could have a compromise between the two states, and Texas conserves a little bit more water and New Mexico maybe lightens up a bit on their water law.”

This article originally appeared in The Texas Tribune at https://www.texastribune.org/2018/06/07/texas-landowners-new-mexico-stealing-water-fracking/.