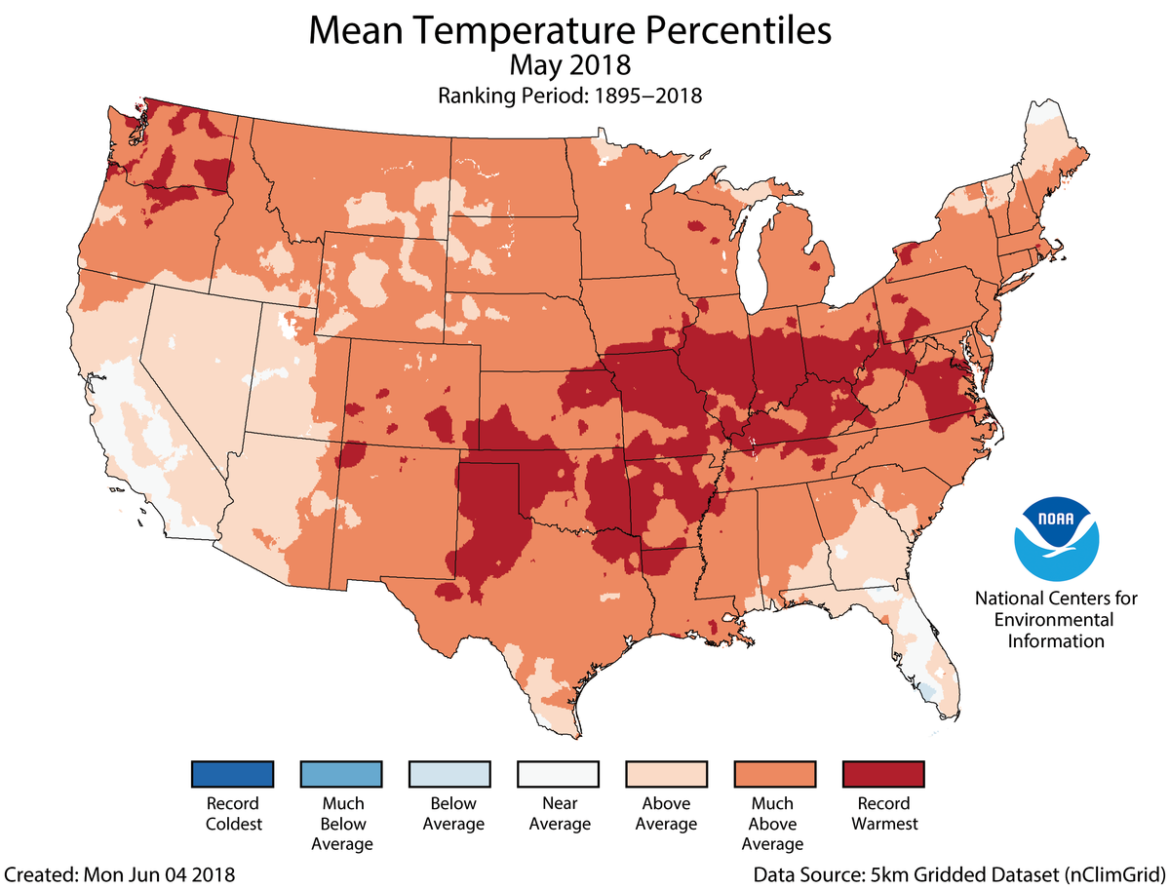 Yup, it’s hot. And dry, and smoky. And greenhouse gassy.

Scripps Oceanography and NOAA announced this week that average levels of carbon dioxide in the atmosphere exceeded 411 parts per million in May. That’s a new record. And their studies show that the rate of CO2 increase is accelerating. To read more visit here.

Want this via email on Thursday, instead of on the web Friday? Subscribe to our once-per-week environment email here.

And, the contiguous U.S. also had its warmest May on record. In fact, each and every state in the U.S. was warmer than the average May in the 124-year record.

Climate Central published a story at the end of May about how summers are getting hotter. You can select a city and see how much warmer.

-Today, the Natural Resources Conservation Service released its water supply forecasts. Spoiler alert: The forecasts look pretty bleak for the Rio Grande Basin and the Upper Colorado River Basin, both of which we rely on here in New Mexico. You can look at all the forecasts for yourself here.

-On his blog, John Fleck notes that flows at the Gila River gage dropped to their lowest levels ever measured. Check it out here. (And note that he bucks the USGS standard spelling of “gage” to go with the way everyone else spells it.)

-Last week, NM Political Report covered a permit change pending before the New Mexico Environment Department related to storage at WIPP. On Friday, the department announced its decision, to elevate the modification to a higher class. What does that mean? Good question. Former WIPP manager for NMED, Steve Zappe, explained to me that it means the decision has been delayed. There will be another public hearing, and the final decision will likely be made by the next state administration.

-In case you missed it this week, we were busy covering the primary election and energy issues. (To see all of our election coverage check out our homepage.) On Wednesday, there was a critical meeting in Albuquerque related to federal royalties from oil, gas and coal, and an interesting hearing in Washington D.C. featuring Gov. Susana Martinez and Ken McQueen, secretary of the state Energy, Minerals and Natural Resources Department. The two testified in favor of four energy bills, including two sponsored by Rep. Steve Pearce. You might notice that our coverage is pretty different from some of the other outlets that wrote about the hearing. That’s because it’s one thing to listen to people read their written testimony. It’s quite another to stick around and watch them answer questions.

-And check out what the Albuquerque Journal’s Michael Coleman asked Martinez before the hearing. Again, the answers are enlightening.

-In other New Mexico environment news:

-Angela Kocherga writes for the Albuquerque Journal about the impacts the border wall will have on wildlife. And yes, the new border wall is already under construction in southern New Mexico.

-If you’re looking to keep up with the Ute Park Fire, the Taos News will help you do that and the Silver City Daily Press is tracking fires and closures in the Gila.

-We also have a story from the Texas Tribune on our site right now about State Land Commissioner Aubrey Dunn and another water war between New Mexico and Texas.