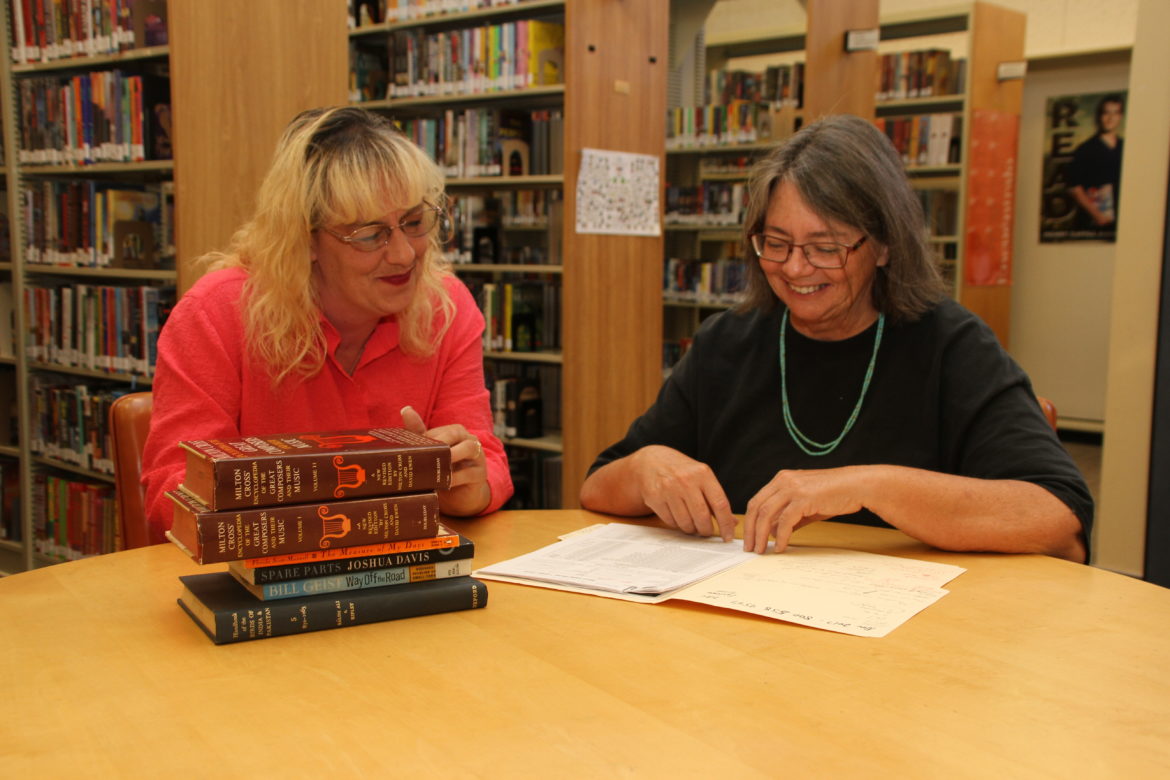 Mary Beth Folia, at right, looks over HiSET (High School Equivalency Test) assessment records with student Jennifer Williams at the Silver City Public Library. Folia is the program director for Literacy Link-Leamos in Silver City and her office is in the library.

Connie Flores never wanted to drop out of school, let alone leave in eighth grade. But like thousands of other teenagers who never graduate high school in New Mexico — a state with one of the highest dropout rates in the nation — Flores didn’t think she had a choice.

She’d been an A student in her early school years in Santa Clara, the small village near Silver City where she grew up.

“I loved school,” she says.

But when Flores reached fifth grade, she says her mother, an alcoholic, began to rage out of control. She alternately kicked Flores out of the house or disappeared on lengthy drinking sprees, leaving Flores in charge of her siblings.

“I had to stay home from school to take care of my younger sisters,” she says. “My littlest sister was still in diapers.”

At 13, Flores moved in with her boyfriend to avoid the abuse at home. She ended up pregnant. At 14, she had a son and dropped out of school. Years of chaos, depression and meth addiction followed.

Flores started selling small amounts to support her habit. She got busted — “a blessing,” she says. She got clean and sober and did her one-year stint in the “God Pod,” a cellblock reserved for devout inmates. “It totally changed my life.”

Now came the next big challenge: getting a high school diploma. By this time, it was 2013 — she’d been out of school for two decades. She couldn’t tell a polynomial expression from a parallelogram. It was going to be a struggle.

Many things are a struggle in adult education — and not just from a student’s point of view. For state governments, the struggle is to fund adult ed adequately and provide the necessary services, according to experts and advocates.

In New Mexico, the need is astronomical. An estimated 400,000 adults — roughly a third of the adult population — could benefit from adult ed, according to the Higher Education Department (HED) and its Adult Education Division. People in this category don’t have a high school diploma, can’t speak English or have a fourth-grade skill level or below, the state says.

How many get the help they need? “We were only able to serve about 3 percent,” the HED says in its 2017 annual report.

The department’s roughly 27 adult education programs around the state served 12,755 adults between 16 and 64 years old, according to the 2017 report. It was the lowest number of people served in nearly a decade.

In 2009 and prior, before the Great Recession, nearly double that number — or more than 23,000 people — took basic education classes, studied civics or English as a second language, or studied for high school equivalency exams like the GED or the HiSet (High School Equivalency Test). Still, that was only about five percent of the people in need.

“We are dedicated to serving as many people as possible, but it is just as important that we serve them effectively,” Lida Alikhani, spokesperson for the Public Education Department, said in a written statement. The director of the Adult Education Division, Frances Bannowsky, declined to speak to Searchlight New Mexico, despite numerous requests for interviews.

State budget cuts are a continual obstacle, education experts say. And the lack of enthusiasm for adult ed, while particularly pronounced in New Mexico, is a problem around the country. Advocates like the New Mexico Coalition for Literacy, a nonprofit that supports community-based literacy programs statewide, have for years faced funding challenges.

Adult ed just doesn’t make it on the public radar.

“We’re trying to get people to understand that investing in adult education isn’t just good for the individual — it’s good for the family, for the children, for the community and for the economy,” says Sharon Bonney, executive director of the Coalition on Adult Basic Education, a national advocacy group.

Every study finds that a parent’s education level — particularly the mother’s — is the highest determinant of a child’s academic success. The positive effects are virtually lifelong, as one longitudinal study showed. It found that children of high school graduates pursue more education, get better jobs, make more money and are more optimistic than children whose mothers never graduated.

“When you help an adult with a young kid, and the adult graduates from high school, the kid is going to graduate from high school, you can almost guarantee it,” says Mary Beth Folia, program director of Literacy Link-Leamos.

The tiny nonprofit operates out of the Silver City Public Library, about eight miles west of where Flores lives. The program was her salvation, she says.

To master the math skills for the equivalency test, Flores, now 40, spent one or two days a week for two years with a Literacy Link volunteer tutor. One of dozens of adult literacy programs around the state, Literacy Link offers free and confidential one-on-one tutoring on a wide variety of skills, from English language to computer literacy. One volunteer makes regular visits to the Grant County Detention Center to videotape inmates reading a children’s book, for example, then brings the video to their kids — offering them the same book to read, free, so they can follow along with their parent.

The emotional benefits are unmistakable, Folia says. “You see these big, strong guys in jail, reading Guess How Much I Love You to their kids and apologizing for what they’ve done. And the kids are so thrilled to see their dad.”

Adult ed is one the most effective tools to break the cycle of family poverty, helping children and parents achieve better jobs, wages, health and well-being, while also boosting the economy, potentially by billions of dollars, according to a 2014 evaluation by the Legislative Finance Committee (LFC).

It helps the under-educated escape welfare, lowers incarceration rates and even improves voting rates and civic participation, other studies have shown.

Extensive research describes both the daunting extent of the problems and the huge upside if they’re solved. Consider:

Student of the year

In 2013, Flores was released from prison. She took care of her youngest child and juggled two jobs. In between, she hit the books.

The tutoring at the Silver City Public Library “had me looking at things I’d never seen before,” she says. “The math was really hard. But my tutor was awesome. She was so patient.”

The graduation ceremony was held in May at Western New Mexico University. And the New Mexico Coalition for Literacy gave her even more reason to celebrate: The group honored Flores as its “Student of the Year” and named Literacy Link its “Program of the Year.”

As Flores stood to accept the award, her children, family, tutors and supporters rose from their seats and cheered.

“They gave me a standing ovation,” Flores says, still a bit shocked by it. “I could hardly say thank you, I was so choked up.”

She’s talking about college now and planning to work in a health field.

“I never dreamed I’d have the kind of life I have today,” she says. “It just makes me think about all the possibilities.”