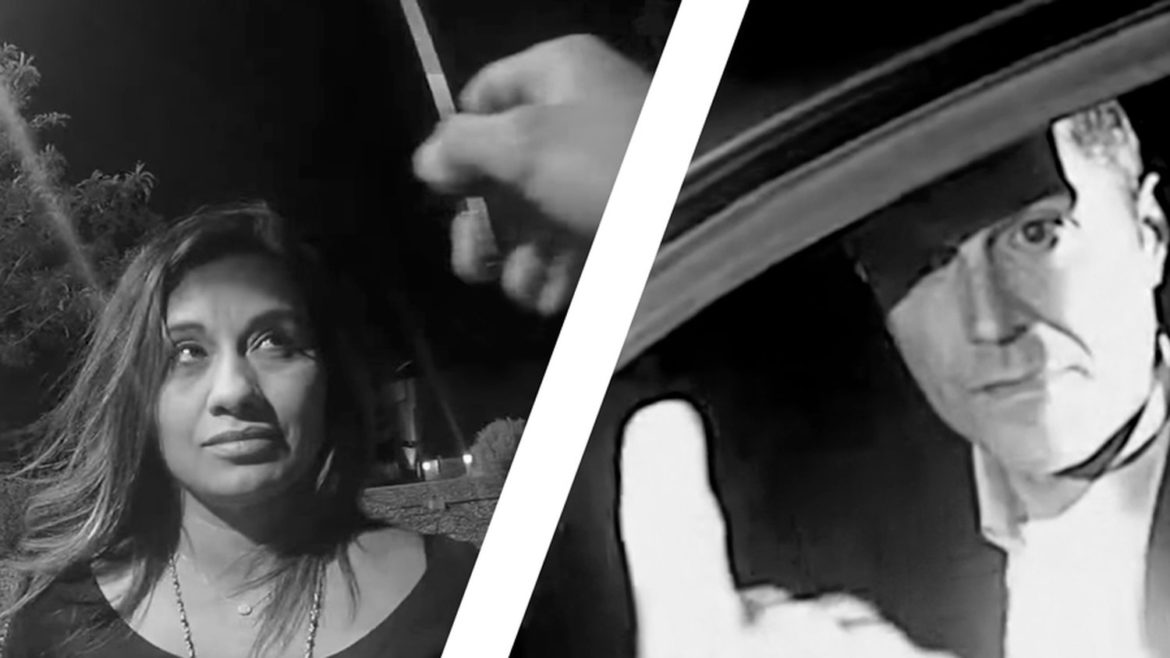 For the second time in a year, Albuquerque police officer Joshua Montaño found himself handcuffing a high-profile politico with ties to Gov. Susana Martinez.

Montaño arrested state Rep. Monica Youngblood on May 20 on suspicion of aggravated drunken driving, first offense, after he believed she performed poorly on field sobriety tests at a DWI checkpoint on Albuquerque’s west side, then refused to take a breath-alcohol test.

A year to the day earlier, on May 20, 2017, the veteran DWI officer arrested one of the state’s most influential political insiders, former Martinez Environment Department secretary and current New Mexico Oil and Gas Association President Ryan Flynn, on suspicion of DWI.

Flynn’s case was dismissed; Youngblood’s is just beginning to wend its way through the courts.

Given the Albuquerque Republican’s high-profile stance as a Martinez-friendly, tough-on-crime legislator, her unopposed victory in the June 5 primary election and calls for her to abandon her legislative seat, Youngblood’s arrest has kicked up a political stir.

But Youngblood’s and Flynn’s cases, taken together, have surfaced deeper questions about potential conflicts of interest — particularly once lawyers in a small community achieve a certain lofty status — and how criminal justice officials can navigate them, assuring the public that well-connected defendants are treated the same as everyday citizens in court.

A good government advocate has criticized the circumstances surrounding Flynn’s dismissal, and at least one attorney has filed a court motion seeking to disqualify the entire office of Bernalillo County District Attorney Raul Torrez from a separate DWI case. The motion rests on information unearthed by Santa Fe Reporter and New Mexico In Depth questioning whether the office had created a sufficient firewall to avoid a conflict between prosecutors and defense lawyers in the Flynn case.

A blanket “trust us” from officials is not enough to ensure the public’s faith in the criminal justice system, the court motion and the advocate say.

Legal ethics experts say the rules governing such conflicts are gray. Officials rely largely on individual attorneys’ integrity to avoid conflicts — a sort of honor system — and policies in law firms and prosecutors’ offices to ensure the fair administration of justice.

The cast of characters, strikingly similar in both the Flynn and Youngblood cases, offers a glimpse into the longstanding relationships that can form in legal communities where practitioners may see each other regularly, and demonstrates the need for safeguards.

Montaño was the arresting officer in both cases; both defendants have helped turn the gears of the Martinez political machine; and their closely connected attorneys have ties to the state lawyers and supervisors assigned to prosecute the two politicos.

Flynn’s lawyers, Nicole Moss and Kari Morrissey, share space in a two-story, Spanish-revival-style dwelling on 12th Street in Albuquerque owned by Paul Kennedy, who has raked in millions of taxpayer dollars as the governor’s favored contract lawyer and whom she once appointed to the state Supreme Court.

According to emails obtained by SFR and NMID, Morrissey worked with Deputy District Attorney Jason Greenlee, another former Martinez judicial appointee, to plead Flynn’s aggravated DWI case down to careless driving, which carries far less penalties. However, the emails showed Greenlee was supposed to have been “removed” from decision-making in the case because he and Flynn’s attorneys are “really good friends.” (Flynn’s other defense attorney, Moss, also served as the treasurer of Greenlee’s failed 2014 campaign for a Metropolitan Court judgeship).

Greenlee also entered his appearance as the prosecutor in the Youngblood case two days after her arrest last month. He has since withdrawn. It is unclear why.

Sussing out whether friendships between prosecutors and defense lawyers could impact a case can be difficult, says Marsha Baum, associate dean for academic affairs at the University of New Mexico School of Law. The guidelines, set up by the American Bar Association, are “aspirational” and leave room for interpretation.

“The lawyer has to decide: Is this a significant personal relationship that I have? ‘I have a beer with them occasionally because I see them at the trial lawyers association meetings,’ vs. ‘I’m playing golf together with them every week because they’re my best friend,’” says Baum, speaking generally and not about any specific case. “That’s a very different kind of relationship, but it still leaves it to the lawyer to decide. Or, does the office have a policy saying if you have this type of relationship, you should disclose it to the supervising attorney?”

DA Torrez and his spokesman, Michael Patrick, did not hand over policies that relate to conflicts of interest, and they ignored written questions and a request for an interview with Torrez for this story.

Baum says that for prosecutors, except in specifically forbidden categories — familial ties, marriage, romantic relationships — the calculus for measuring conflicts is: “Can I use my best professional judgment and prosecute this case effectively? Am I being fair to other defendants who have come up on similar charges when I don’t have a friend on the other side? Am I going to have the same result with that person as I would have with my friend? They should be questioning that.”

Viki Harrison, executive director of Common Cause New Mexico, puts a finer point on it. She says conflicts of interest in high-profile criminal cases such as those unearthed by SFR and NMID in Flynn’s dismissal make the public feel like the criminal justice system “isn’t looking out for the regular person.”

“They’re supposed to be there for the law — not for themselves, not for their friends,” Harrison says of prosecutors.

SFR and NMID’s reporting on the Flynn case triggered legal blowback for the DA’s office. In a separate DWI case, defense attorney Joel Davis filed a motion to disqualify the entire office from prosecuting his client on traffic and aggravated DWI charges.

Davis wrote he and Joshua Boone, who supervises DWI cases in the office, once worked in the same law firm. Davis sued Boone after Davis departed the firm, alleging Boone owed him money. Davis described the split as “acrimonious” and worried in his court motion that the DA’s office would not be able to treat his client fairly.

In a telephone conversation, Boone assured Davis he would not be prosecuting the case, according to the motion. But Davis was unconvinced. He argued that emails from the Flynn case, published by SFR and NMID, showed the district attorney’s office had demonstrated an inability to wall off conflicts.

“Due to the nature of the emails exposed during the Ryan Flynn case by the NM In Depth [and SFR] articles, and [public records], it does not appear that a ‘Chinese Wall’ as Joshua D Boone states will be effective enough to prevent a conflict or appearance of a conflict or bias by the 2nd DA’s Office in this matter,” Davis wrote.

In court-filed responses, Greenlee initially fought Davis’ motion, but has since offered to remove the Metro Court division of the DA’s office — which includes himself and Boone — but not the entire office from the case.

A judge has not ruled on Davis’ motion.

Harrison of Common Cause says that while attorneys may look to the law to handle conflicts of interest, the public is more concerned about perceptions of such conflicts.

The Bar Association’s rules for conflicts involving prosecutors are couched in language such as “should” rather than “shall” and, in most cases, violations don’t result in discipline, says Baum, the law professor.

However, if a pattern of conflicts arises that could impede justice, a prosecutor could face consequences, Baum says.

“If it comes out later that they should have recused themselves or been disqualified from the case, they can be disciplined for that, too,” she says. “Having policies in place within the offices that fit within these standards is probably the most helpful.”

Neither Kennedy nor Youngblood responded to an email requesting comment for this story. Kennedy defended Youngblood in a statement to the Albuquerque Journal, saying she is “entitled to all due process, just like every other American.”

Kennedy has in the past expressed concern that speaking with either one of the reporters on this story could create a conflict. One reporter was involved in a lawsuit against his most prominent client, Gov. Martinez. The other is suing the state for his billing records in several cases in which he represented the Martinez administration.

Indeed, Kennedy’s decades-long legal career has led to countless relationships across the justice system — including a tangential connection to the man who will presumably oversee the prosecution of Youngblood.

The supervisor, Greenlee, is married to Albuquerque attorney Elizabeth Radosevich, who was once Kennedy’s lawyer; she represented him in a contentious probate case involving Kennedy’s former law partner, Mary Han, who had died.

Two days after a reporter contacted Radosevich to inquire about her relationship with Kennedy, Greenlee formally withdrew as the prosecutor from the Youngblood case — a week after a judge had ordered him to step aside. However, unlike in attorney Davis’ DWI case, in which Davis alleged conflicts with the DA’s office, Greenlee has made no indication that he will not supervise the Youngblood case, or remove the entire Metro division.

Radosevich said in a telephone interview that even if Greenlee were prosecuting Youngblood, there would be no conflict of interest because she no longer represents Kennedy. She added, “I have no involvement in his work with his clients on his cases.”

One justice system official has stepped aside completely from the Youngblood case, citing the possible appearance of a conflict of interest.

The case  was initially assigned to Chief Metro Court Judge Edward Benavidez. He recused himself because, in his role as chief judge, he testifies before the Legislature. That has meant answering questions from Youngblood and could again, if she decides to stay on the ballot come November.

This story was reported and edited in collaboration with the Santa Fe Reporter, an NMID partner