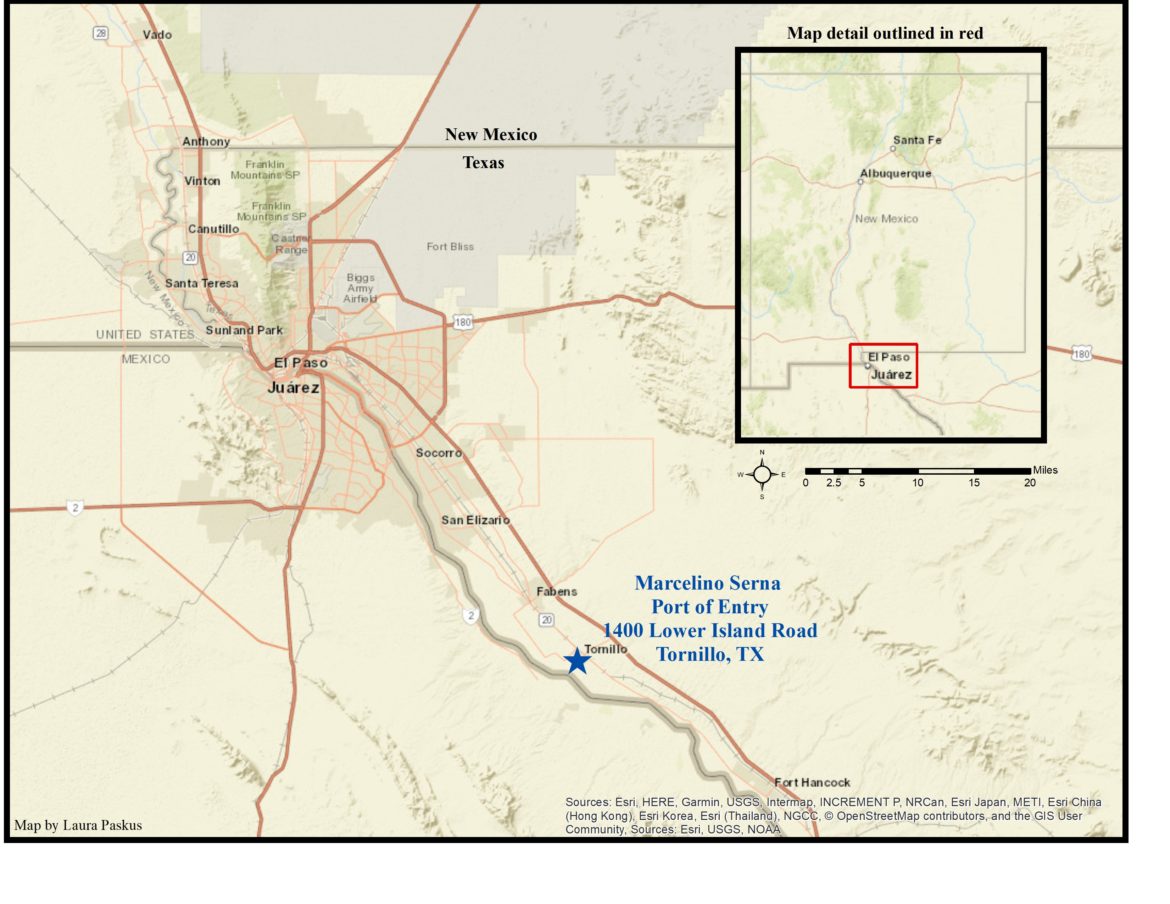 Tornillo, Texas, is a desert town east of El Paso, just 89 miles from Las Cruces. Fewer than 2,000 residents were recorded living there in the 2010 Census. But it hosts a port of entry across the U.S.-Mexico border—one that exposes the increasingly urgent moral battle over migration and human rights.

Last week, the Trump administration announced a new facility at the port of entry to temporarily hold immigrant children separated from their parents.

According to a story in the Texas Tribune, HHS is erecting tents in Tornillo for the children and teens. Reporter Bob Moore, former editor of the El Paso Times, noted that while the federal government uses the name Tornillo Land Point of Entry, it actually has a different name: The Marcelino Serna Port of Entry. In 2016, it was re-dedicated and named for a Mexican immigrant who was “Texas’ most decorated soldier in WWI,” Moore wrote.

The tents—constructed to address overcrowding at existing facilities—and the separations are part of a “zero tolerance” policy U.S. Attorney General Jeff Sessions announced earlier this year. All migrants caught entering the U.S. illegally are now prosecuted for a misdemeanor in the criminal court system, rather than deported. The government takes parents to a detention facility and places children U.S. Department of Health and Human Services (HHS) custody, from which they can only be released to a family member, guardian or foster family in the U.S.

Under another new, vague policy, people seeking asylum under the legal immigration process are separated from their children, as well.

Separating families is a plan the administration considered for more than a year. In March 2017, then-Secretary of Homeland Security John Kelly told CNN fear of separation would deter migrants along the U.S.-Mexico border.

During a recent visit to the border, Gov. Susana Martinez told the Albuquerque Journal she supports the Trump administration’s policy.  “We don’t let people who break the law continue to be out breaking the law simply because they have children,” Martinez told the reporter.

Not all elected officials in New Mexico share that sentiment.

U.S. Sen. Tom Udall criticized Trump for using children as a “bargaining chip to try and extract his anti-immigrant agenda and to build his unnecessary and offensive border wall.”

On Friday, the president tweeted: “The Democrats are forcing the breakup of families at the Border with their horrible and cruel legislative agenda. Any Immigration Bill MUST HAVE full funding for the Wall, end Catch & Release, Visa Lottery and Chain, and go to Merit Based Immigration. Go for it! WIN!”

Saturday morning, Trump took to social media again, writing: “Democrats can fix their forced family breakup at the Border by working with Republicans on new legislation, for a change! This is why we need more Republicans elected in November. Democrats are good at only three things, High Taxes, High Crime and Obstruction. Sad!”

Trump is misleading the American people about the policy of separation, Udall said: “He has escalated this punitive practice and he could end it in a matter of minutes.”

There is no law requiring the separation of children from their parents at the border, Udall said, and he’s called for congressional hearings on what he called a “cold-hearted and immoral decision” by Trump, Sessions and U.S. Department of Homeland Security Secretary Kirstjen Nielsen.

Udall has also been trying to understand how and why the administration is carrying out the policy and how many children are being detained.

The senator’s office requested information from the U.S. Office of Refugee Resettlement about separated children, including the number of children, their age, gender and country of origin. They have yet to receive adequate answers.

“The limited specifics we have are heart-wrenching and appalling: according to information provided to my office, HHS has shared estimates that, in just over a month, more than 1,600 children have been torn away from their parents and put in the custody of the Office of Refugee Resettlement,” he said. “And according to reports, at a converted detention facility in Brownsville, Texas, children are being held for an average of 52 days – 52 days at a facility where they spend approximately 22 hours a day locked inside.”

Friday, the Associated Press reported 2,000 children were separated from their parents along the border between April 19 and May 31, according to the Department of Homeland Security.

“Treating these defenseless children—many of whom are with families seeking asylum from horrific circumstances—like they are criminals is simply unconscionable,” Udall said.

When asked how New Mexicans can respond, the senator suggested people call their elected officials and the White House and speak up within their communities. Along with his colleague U.S. Sen. Martin Heinrich and dozens of other senators, Udall has introduced the Keep Families Together Act, a bill to stop the Department of Homeland Security from taking children from their parents at the border in this way.

“The policy is immoral, cruel, and ineffective,” Udall said.

Heinrich said he has closely followed the humanitarian crisis along the U.S.-Mexico border. In 2014, he toured temporary facilities for undocumented parents and children in Artesia, and in 2016, visited the temporary facility at Holloman Air Force Base for unaccompanied minors—children and teens who travel across the border without parents or guardians.

What’s happening now is different. And he called the “inhumane” policy of separating children from their families “ineffective and immoral.”

The Keep Families Together Act, he said, would stop the Department of Homeland Security from taking children from their parents at the border. Another bill he co-sponsored, the Humane Enforcement and Legal Protections for Separated Children Act, would protect minor children left alone after their parents have been arrested or detained by U.S. immigration authorities, he said.

“I have heard from New Mexicans across the state who are scared and worried about these heartless policies, and have a unique perspective to share on this issue,” he said. “I encourage them to call on lawmakers to hold hearings, push for laws that protect children and continue to make their voices heard.”

“We need to ensure all immigrants are treated with respect when they come to the country,” Pearce said. “Separating families is not the solution to the many problems that exist in our broken immigration system.”

The system has not changed under the Trump administration, he said.

“When a child is separated from a parent, the Department of Health and Human Services tries to place the child in the most appropriate setting, whether that is with a family member who is in the country legally or in foster care.” he said. “Border Patrol agents do all they can to ensure that a child is not being placed in a dangerous environment.”

Asked about the conditions of the facilities and the qualifications of those working with the children, Pearce said he was “confident that the individuals working these facilities are qualified to carry out their duties.”

Pearce said Congress must “come together to make meaningful changes to the immigration system so these problems will not persist in the future.” He also encouraged people with specific concerns about a specific case to contact his office to “ensure that all proper protocols and procedures are being followed accordingly.”

Pearce is leaving his congressional seat to run for governor against U.S. Rep. Michelle Lujan Grisham.

As chair of the Congressional Hispanic Caucus, Lujan Grisham has been a vocal critic of the separation policy. In May she called out the four federal agencies involved—the Justice Department, HHS, DHS and ORR—for being “ill-equipped” to ensure the well-being of children in custody.

“There are no substantive defenses, no policy defenses to their current actions separating families and taking children away from their mothers and fathers at the border,” she said. “It just is another indication that they cannot govern, they are not interested in doing the right thing and they have nothing defensible about any of the current decisions this administration is making.”

Lujan Grisham added that the Trump policies on separation are new.

“It is not a Democratic policy, it was not an Obama policy, and they do everything they can to try to deflect from telling the truth,” she said. “They hide from the fact that they recklessly created the crisis by rescinding DACA—and they did it to try to extract political gain in the most draconian ways and to use immigrant and migrant families to try to do that.”

‘The Bible tells us to love our neighbor’

On Thursday, Sessions defended the White House’s immigration policy to church leaders in Indiana, saying the U.S. has an “historic opportunity to—finally—fix an immigration system that has been broken for decades.” He said “elites and Washington insiders have prioritized the interests of certain corporate interests and activist groups over what is best for the American people.” The Trump administration, he said, is “working to restore legality to the system” and attacked the media for “fake news” about the zero tolerance policy.

Sessions said the policy of “short term separation of families is not unusual or unjustified” and cited the Bible:

Persons who violate the law of our nation are subject to prosecution. I would cite you to the Apostle Paul and his clear and wise command in Romans 13, to obey the laws of the government because God has ordained them for the purpose of order.

Orderly and lawful processes are good in themselves and protect the weak and lawful.

Immigration to the United States is not a right, he said, and Trump is keeping his word to “end the illegality and to fix our system.” Sessions added: “Some people in the media have chosen to attack us for enforcing the law. That doesn’t surprise me. But I’m not ashamed of the United States of America. I am not going to apologize for carrying out our laws. That is my duty.”

Sessions also recently decided that immigration judges under the Department of Justice should not approve asylum for victims of domestic abuse and gang violence.

The United Nations High Commissioner for Human Rights condemned the separation policy as “a serious violation of the rights of the child.” And leaders across faiths have condemned the policy.

Friday, the New Mexico Conference of Catholic Bishops announced its support for Cardinal Daniel DiNardo, President of the U.S. Conferences of Catholic Bishops who urged courts and policy makers to “respect and enhance, not erode” the county’s asylum system to protect women vulnerable to domestic violence and to keep families from being separated.

U.S. Rep. Ben Ray Luján, who represents much of northern New Mexico, blasted Sessions and the president’s press secretary, Sarah Huckabee Sanders, for citing scripture as justification for what he called a “heartless practice.”

“The Bible tells us to love our neighbor: ‘When a stranger resides with you in your land, you shall not wrong him. The stranger who resides with you shall be to you as one of your citizens; you shall love him as yourself, for you were strangers in the land of Egypt,’” Luján quoted. “There is simply no good reason for taking these children from their parents. If the President truly believes that separating families is wrong, as he has repeatedly said, then he must immediately abandon this policy.”

He called the Trump administration’s decisions “inhumane and immoral.” Early next week, he’ll be visiting the district of Texas U.S. Rep. Filemón Vela with several other lawmakers.

“We’ve already heard stories of children being ripped from their parents’ arms, mothers and fathers begging judges for updates on children they haven’t seen in weeks or even months, distraught children being held in conditions that no child should have to endure, and even of one father who took his own life rather than be separated from his children,” Luján said. “As a nation—as men and women of compassion—we cannot stand by while mothers literally have their children torn from them.”