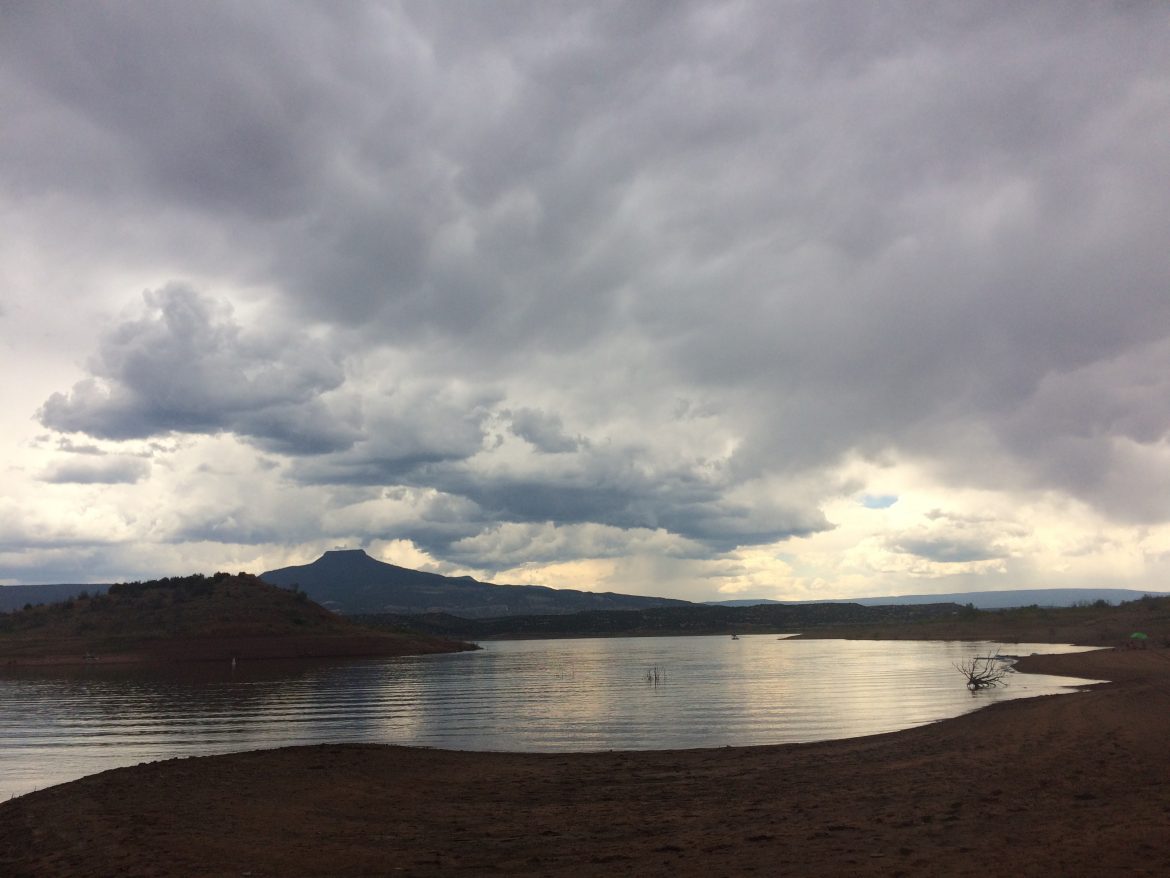 Monsoon rains are welcome, but after a dry winter, they're not enough to boost reservoir levels or river flows

Afternoon storms have started spreading across the state, dropping rain, and even causing flooding in some places. After being closed for more than a month, the Santa Fe National Forest opened, with fire restrictions, on Monday morning. Several days of rain, plus higher humidity has forest officials optimistic about monsoon season and the drought outlook. The Carson and Cibola national forests will likely re-open soon, too.

Editor’s Note: This story was originally published July 8, but a website error deleted the story. We are republishing the story on July 9.

The arrival of the Southwest’s summer monsoons is good news—good news everyone has been waiting for, especially since a dry, warm winter hit the state hard this year.

But drought conditions still persist in New Mexico, and despite temporary bumps in flows, the state’s rivers are still experiencing lower-than-normal flows. At the Otowi Gage on the Rio Grande in northern New Mexico—a critical point for measuring flows and determining how much water New Mexico must send to Texas under the Rio Grande Compact—flows dipped over the weekend to just above 700 cubic feet per second. (One cubic foot per second is equal to about 448 gallons flowing past in a minute or 7 gallons per second.) In Albuquerque, Thursday’s rainstorm pushed the river up to about normal flows. But by Saturday, the Rio Grande through the city dropped back down to about 350 cfs, about half what its flows have historically been in early July.

And it’s not just the Rio Grande.

On Saturday, the Animas River in Farmington was running at about 20 cfs—compared with flows that should be about 1,000 cfs this time of year. The San Juan River in Farmington saw an uptick earlier in the week, but by Saturday it had dropped down to 1,000 cfs, when it should be closer to 1,800 cfs. The Pecos River above Santa Rosa Dam is running at about seven cfs, less than a quarter of the historic norm. And in southwestern New Mexico, the Gila River near the town of Cliff—near where the state plans to build a diversion on the river—is jumping between 15 and 30 cfs. Downstream, near Red Rock, the Gila’s been running at a consistent three cfs. And while it was exciting to see the Santa Fe River roaring after Thursday’s storm, by the next day, the river was down to about six cfs.

Like other New Mexico rivers, the Rio Grande will see bumps in flows due to monsoon rains, but the precipitation deficit remains.

And late last week, the state’s largest river, the Rio Grande, was dry for about 22 miles in the San Acacia reach south of Socorro and about four miles in the Isleta reach above Peralta.

To prevent more drying, the U.S. Bureau of Reclamation has been pumping water from what’s called the Low Flow Conveyance Channel into the channel of the Rio Grande. Excavated in the 1950s, that channel was built to move water into Elephant Butte Reservoir more quickly than the natural river could. Because that channel is lower in elevation than the river channel, runoff from fields and seepage from the river collects there.

“Due to low water levels in the LFCC, one of the South Boundary pumps has been shut off and we are preparing to shut off another. Drying may be seen in the near future below San Marcial,” Reclamation spokeswoman Mary Carlson said late last week. She added that the federal agency is finalizing leases on more than 13,500 acre-feet of water, which include previous-year water and new leases. Of that, she said, there are about 6,000 acre-feet remaining in storage for releases to keep the river from drying.

“We have seen a pretty rapid drawdown of many reservoirs in New Mexico through the hot and dry conditions over the last few weeks,” she said. “We are watching weather forecasts and are hopeful that the good monsoon in the forecast actually materializes soon. Until then, we continue to make every effort to lease available water and to coordinate with our fellow water management agencies for the most efficient use of the limited water supply we have.”

Meteorologists with NOAA’s Climate Prediction Center anticipate that drought will remain in the state, but that conditions will improve between now and September, thanks to monsoon rains. Even that won’t return things to normal. According to the Center for Western Weather and Water Extremes, the southwestern United States is in such a precipitation deficit right now that even a historically-good monsoon won’t help the region recover enough to reach 100 percent of its normal water year precipitation.

NASA announced last week that May 2018 was the fourth-warmest May on record. The period of March-April-May was the third-warmest Northern Hemisphere spring in 138 years of record-keeping. June was a scorcher as well, and July has been no better. The Washington Post reported last week that all-time heat records were set worldwide in early July, from northern Siberia to Africa, and Los Angles to Ireland.

In the Middle Rio Grande Valley, Carlson added that with their partners, Reclamation has made every effort possible to keep as much water in the Middle Rio Grande as possible. “We have been dealt a very difficult year in terms of water supply and at this point we are just focused on operating in the most efficient way possible,” she said.

Carlson said it’s been great to see New Mexicans enjoying picnics and swimming from sandbars that have popped up in the state’s rivers as water levels have dropped. But she asked people to stay safe: “We would ask that folks who are taking advantage of the recreation opportunities due to low water levels be alert and aware of weather forecasts upstream,” she said. “We don’t expect any drastic shifts in the water levels at this time, but a well-placed storm upstream can change the situation on the river quickly.”