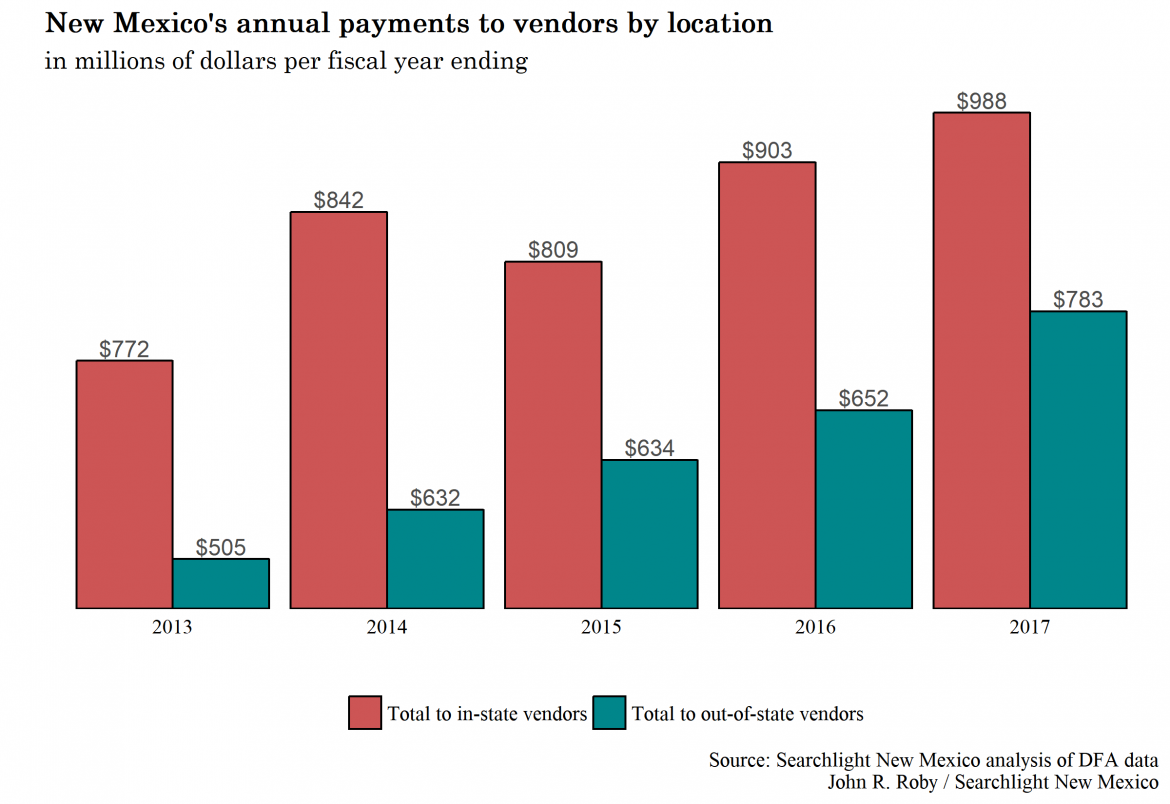 Billions of taxpayer dollars have flowed out of state since 2013 due to government purchases that are not filled — or cannot be filled — by New Mexico companies, a Searchlight New Mexico analysis finds.

Over the past five years, 43 cents of every dollar the state paid companies and consultants went outside New Mexico’s borders, according to Searchlight’s analysis.

That price tag stands at $3.2 billion and is growing.

According to the state’s own data, spending on outside vendors grew faster than spending on in-state vendors over the past five years of Gov. Susana Martinez’ administration.

That dynamic is unlikely to change without a significant overhaul of the state’s economy, according to several experts interviewed for this article.

Everything the state buys — whether it’s copy paper or legal advice — is sold by a company or individual known as a “vendor.” New Mexico usually – but not always — requires vendors to go through a bidding process before a contract is awarded.

Searchlight New Mexico acquired the vendors data through a monthslong process that began in June 2017 and required multiple public records requests. The data are posted on a publicly accessible portal, (https://data.searchlightnm.com/vendors), a comprehensive breakdown of state payments to local and outside vendors.

New Mexico — despite multiple laws compelling transparency — has previously never released information on where its vendors are based. The state’s secrecy around nonresident vendors has drawn the attention of legislators, watchdogs and trade groups, and was the subject of a special report by the state auditor in 2017.

“A lot of bills we’ve passed over the years [contained] a clause saying, ‘This information shall be posted to the Sunshine Portal or a link shall be created to this information.’ Little of that has been done,” said Sen. Sander Rue, R-Albuquerque. “I would argue this administration has not considered that a priority.”

On paper, the state claims to prefer in-state or “resident vendors” whenever it evaluates bids. This is to be expected, since dollars spent locally — whether by a household or by a government — tend to multiply throughout the local economy. For that reason, “it is exceedingly meaningful” to the economy when a government buys locally, said Kelly O’Donnell, an economist and research professor at the UNM School of Public Administration.

“New Mexico’s economy is reliant on federal expenditures, and to a lesser extent on state and local expenditures,” she explained. “When we’re talking about professional services, R&D, that sort of thing, it’s clear that purchase of those sorts of products from New Mexico vendors is important to the New Mexico economy.”

The state’s troubled behavioral health system is a case in point.

After 15 state-based behavioral health companies were accused in 2013 of overbilling Medicaid to the tune of $36 million, the Martinez administration enlisted five Arizona firms to replace them. New Mexico subsidized the five Arizona behavioral health companies while they spun up their operations in this state over a period of 18 months — at a total cost of $24 million, The Santa Fe New Mexican reported in 2014.

Some of those firms billed the state up to five times the rates New Mexico had previously paid the in-state firms for comparable services, according to The New Mexican. Most of the Arizona providers have since laid off workers and left New Mexico, while the sanctioned in-state firms were later cleared of most wrongdoing.

Money flows out of state

Searchlight’s data show New Mexico spent $22.1 billion total between Fiscal Years 2012-2013 and 2016-2017. The majority of that went to school districts, local governments and other departments — it was, in effect, the government paying itself. That left about $7.5 billion in payments to vendors. Of that, 57 percent, or $4.3 billion, went to vendors within New Mexico, while 43 percent, or $3.2 billion, went to outside vendors.

The state’s annual spending on vendors rose 38 percent between 2013 and 2017, from $1.28 billion to $1.77 billion. But it was not evenly split. In that same time period, the out-of-state fraction rose 55 percent, from $505 million to $783 million, while the in-state fraction nudged up 28 percent, from $772 million to $988 million. In other words, growth in the state’s purchases from nonresident vendors has outpaced its in-state vendor spending.

What does New Mexico buy? Everything from swizzle sticks for state office coffeemakers to multimillion-dollar contracts to provide healthcare coverage for state employees. The single largest payment was over $106 million in 2016 to Chicago-based Health Care Services Corp. for group health insurance coverage; the smallest was 1 cent on rubber bands from Albuquerque-based Sandia Office Supply in 2015.

The largest spending in total dollars is on medical and professional services. These include everything from group insurance to prescription drugs and health coverage, to policy consulting and marketing. Together, they account for $2.6 billion paid to vendors inside New Mexico — and nearly $2 billion paid to nonresident vendors.

The five largest in-state vendors by total dollar amount were United Behavioral Health, Presbyterian Health Plan Inc., Deloitte Consulting, Mountain States Constructing and the University of New Mexico. All are based or have offices in Albuquerque except Deloitte, a nationwide company with a Santa Fe office.

The five largest out-of-state vendors were Health Care Services Corp. of Chicago, Express Scripts of Maryland Heights, Mo., Medco Health Solutions of Charlotte, N.C., S.L. Start and Associates LLC of Spokane, Wash. and Shi International Corp. of Somerset N.J. The top three are all providers of health care and insurance services with a nationwide reach. S.L. Start contracts with New Mexico and four other states to provide employment services for people with developmental disabilities, and Shi International is a software and technology company.

In other words, New Mexico spends money both in-state and out-of-state for some of the same types of goods and services. Whether public dollars go to a particular vendor depends in part on the bids the state receives, the vendor’s qualifications and the quality of the product or service, as well as where the company is located.

All this points to what experts say is key to remember about government purchasing: It’s good to buy local, but it’s also good to buy smart.

“There are some instances in which, for whatever reason, New Mexico vendors don’t have the capacity to meet a specific need,” O’Donnell said. “The government has a responsibility to spend taxpayer dollars responsibly, and that may mean by purchasing certain products from nonlocal vendors.”

What the governor buys

Purchases by the Office of the Governor illustrate this point. On the one hand, its spending is moderate as state agencies go, with just over a half-million dollars paid to vendors since 2013. But its in-state/out-of-state ratio of 44 percent to 56 percent matches the state’s ratio as a whole almost perfectly, and the kinds of things it buys from nonresident vendors show up again and again across state government purchases.

The office was also one of the 27 state departments, offices and agencies that spent more dollars on outside vendors than on ones inside New Mexico since 2013.

Searchlight’s data show the governor’s office spent $289,000 with out-of-state vendors and $230,000 in-state. The largest blocks of out-of-state spending were for professional and attorney services, legal subscriptions and technology.

For example, the office has paid nearly $65,000 to the law firm Perkins Coie of Seattle since 2015 for legal work on Indian gaming issues and to prepare a friend-of-the-court brief supporting Arizona in a lawsuit over that state’s school funding formula. Perkins Coie is an international law firm with an office in Phoenix, where the school funding case was being decided this year. So for some purchases, an out-of-state vendor makes sense simply due to geography.

Some services the office paid for are not available at scale from a New Mexico vendor. That’s the case for nearly $100,000 the office has paid to West Publishing Corp. and Relx Inc. West, owned by Thompson Reuters with offices in Mesa, Ariz., publishes legal, business and regulatory information, and Relx, a multinational with a Dallas office, provides enterprise-level business and legal analytics.

In other cases, bulk online purchases lock in an out-of-state destination. Buying stamps from the corner post office makes sense for a household, but the governor’s office buys postage differently. Records show an annual $5,000 charge to run the office’s postage machine, routed through the USPS office in Henderson, Nev.

Looking to in-state spending, the office spent the most — between $16,000 and $18,000 annually — on its required audits. Since 2013, those contracts went to either Axiom CPAs of Albuquerque or Macias Gutierrez and Co. CPAs of Española. The governor’s office also frequently paid in-state policy consultants and has hired several Santa Fe-based videographers to film legislative sessions since 2013.

The office spent money on both resident and nonresident vendors for office technology. Purchases include over $30,000 from Albuquerque-based APIC Solutions for things like digital cameras, USB drives and labor, as well as over $25,000 from Chicago-based Sharp Electronics for copier rental fees.

For basic office supplies, the governor’s office exclusively bought in-state, according to Searchlight’s data. One frequent vendor was Sandia Office Supply of Albuquerque, including a $6.82 charge — the office’s smallest single expense — in 2016 for packets of coffee creamer.

So like all state agencies, the governor’s office buys from both resident and nonresident vendors. It tends to look outside for specialized services, and inside for routine services and traditional consumer goods.

That pattern reflects the state’s broader economy, according to O’Donnell. New Mexico’s strengths include high-tech research and development, agriculture and mining, and tourism, but governments only buy so much of those types of products.

“It would be very difficult for the New Mexico economy to produce some of the goods and services that government needs to purchase, and I don’t think we’re going to be in a position to cultivate those kinds of goods and services,” O’Donnell said. “I tend to think by and large New Mexico’s economy is producing what it is best suited to produce. Certainly it can expand and improve, but those changes will be at the margins.”

There is economic value in being a specialist, O’Donnell said. That means developing sectors where New Mexico has strength or potential, while being alert to chances to help smaller sectors grow. The state has untapped potential in its research labs and universities, she said, and long-term, they could hold the key to economic expansion.

“If we wanted to improve the functioning of our economy, a foundational approach is probably necessary — doing a better job educating people, increasing the number of college-educated people who choose to stay here,” she said. “The single largest impediment to our economy is our workforce.”

Despite Searchlight’s release of state vendor data and lawmakers’ attempts to compel further transparency, deep-rooted problems remain with New Mexico’s fractured system of bidding out and reporting on its contract spending.

Legislators and other government accountability agencies have raised flags for years over how the state makes and tracks its purchases. The state auditor released two reports in 2017 related to procurement. One found state agencies rely too much on purchases that do not go through the normal competitive bidding process. That means spending doesn’t get the level of oversight the law requires.

That was not the first time New Mexico’s fragmented procurement system has come into question. A 2016 Legislative Finance Committee (LFC) report found an agency-by-agency mishmash of guidance on procurement as well as requirements for justifying exemptions. As far back as 2008, the LFC had been recommending the state consider ways to consolidate and streamline purchasing.

In a separate review, the state auditor’s office criticized the amount of contract dollars that flow out of state.

Transparency in purchasing is important, according to Rue, because taxpayers should be able to see how their money is spent, and raise questions where appropriate.

“There may be a perfectly good reason for a contract going to an out-of-state contractor,” Rue said. “Fine, but you should be able to explain that. If you can’t explain it, then maybe you should be doing something different, or maybe you shouldn’t be making those decisions at all.”

Searchlight New Mexico is a nonprofit, nonpartisan news organization dedicated to investigative journalism. All content in our Raising New Mexico series is available at projects.searchlightnm.com

John R. Roby can be reached at johnroby@searchlightnm.com.