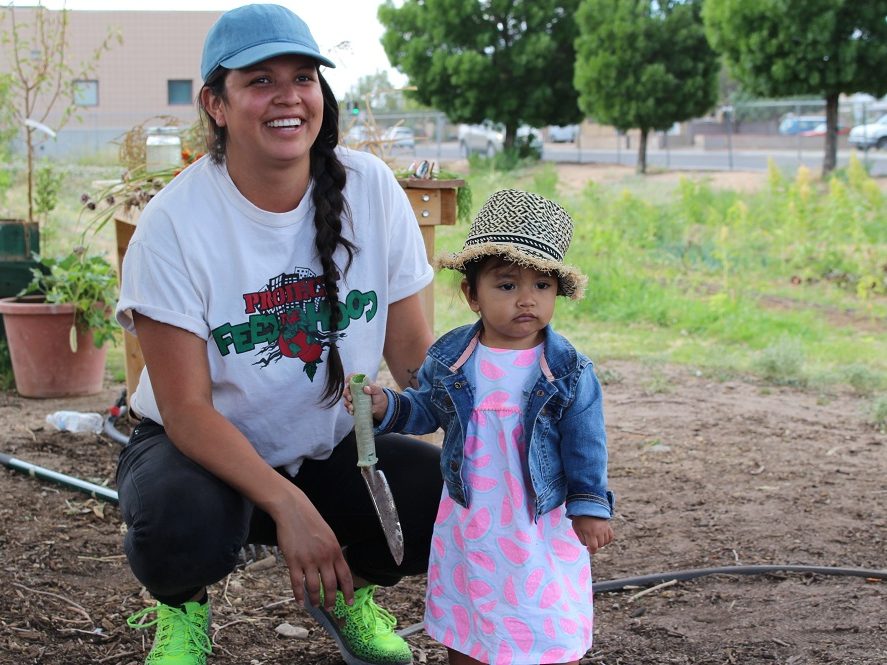 Beneath the gnarled limbs of a sprawling cottonwood tree at the edge of his South Valley farm, Lorenzo Candelaria settles into a circle of lawn chairs. He’s surrounded by staffers from Project Feed the Hood, including Travis McKenzie, Stefany Olivas, Luzero Velasquez and a few student interns. There’s also nine-year old Trayvon, who hops into the (empty) roasting pit, samples blackberries, catches (and frees) a tiny toad and peppers Candelaria with questions about his beehives.

“This is the Cottonwood Clinic,” says McKenzie. He’s the co-founder of Project Feed the Hood, which connects communities with healthy food and young people with the land—and a paycheck.

“This tree gives me strength every time I come down here,” McKenzie says. “We come to the Cottonwood Clinic to heal.”

The younger farmers vie for Candelaria’s attention, laughing, telling stories and asking questions. They talk about bees, berries and a recent litter of kittens born at the farm. He delights in the energy they lend to the Cottonwood Clinic and spread down the rows of blackberry bushes. In early July, the berries aren’t quite ready to be harvested, but everyone roves around, sampling the few that are ripe.

“That’s my biggest reward, when I have the young people working here,” says Candelaria, who is in his 70s. “It’s like a corn plant, it has a chute, a tassel, that it throws up, and it’s called an espiga in Spanish.”

When he sees them working the land, he sees espigas of knowledge and human existence. “They are the espigas of hope,” he says. “They are my hope.”

Candelaria’s farm is within the township of Atrisco in Bernalillo County, which was established in the late 17th century. This land was deeded to his ancestors, he says, and before that, Native people worked the land for a thousand year before the Spanish invasion. “This land that we stand on has been producing sustenance for mankind for thousands of years, and for me it makes it very sacred,” he says.

“I tell all of the people that come join me to do this labor that we plant many plants here on this farm, but we harvest only one thing,” Candelaria says. “And that one thing is consciousness, the ability to understand our connection to this mother we call Earth.”

Candelaria mentors McKenzie and Project Feed the Hood. And, he laughs: “I’ve been feeding the hood for 300 years.”

McKenzie started Project Feed the Hood with Rodrigo Rodriguez about ten years ago. It came out of an effort to convert lawns into gardens and also to reach young people.

Rodriguez began at SWOP in 2006 as a summer youth intern. At that time, he says, they were working on military recruitment issues—in the early years of the war in Iraq, military recruiters heavily targeted schools in predominantly lower-income neighborhoods. SWOP tried to get into those same schools and provide alternative messages to joining the military.

“We were getting locked out of schools, actually locked out,” Rodriguez says today. “Now, we’re invited in.”

Van Buren Middle School was one of the first schools to partner with Project Feed the Hood. At that time, a science teacher wanted to bring science to life for her students, McKenzie says. She planted a small garden of herbs and flowers. Now, Van Buren has more than 3,000 square feet of gardens, elective classes on gardening and after-school programs that involve students and families.

“We’re looking at schools as food hubs,” McKenzie says. “Schools have the potential to grow so much food for our students and for our families and ultimately for our communities, we just have to start thinking about how can we create a landscape into something edible?”

On an early July morning, student youth interns Oscar Bojorquez, Kevin Ortiz and Angel Orozco work in the Van Buren garden. Ortiz explains they clean up the rows and harvest garlic, onions and whatever else is ready.

“At the beginning of summer I was just laying inside watching YouTube on my phone, so I wasn’t really doing nothing and then my friend, he told me about his job so it was also a really good change,” Bojorquez says. The interns learn about gardening—knowledge all three say they share with their families—and they’re paid for their work.

Boundlessly enthusiastic, McKenzie explains that the project’s philosophy is centered on togetherness: people sow and harvest together. And they eat together. “We all share in what we do, which I think is really important,” he says.

‘Every season, we’ll learn something’

Not far from the airport, Project Feed the Hood turned an empty lot into a garden.

Stefany Olivas is wrapping up her time as a Food Corps service member with SWOP. She explains this is the ninth growing season at the Ilsa and Rey Garduño Community Garden, which is named for the former Albuquerque city councilor and his wife.

“Previously it was an emergency landing strip,” Olivas says. “All this land you see is city aviation apartment land, and so we worked with them and many of our local representatives to use this particular plot for growing food.”

When Project Feed the Hood started preparing the land, they hauled out trash, needles, concrete. It’s not a neighborhood known over the past few decades for its gardens or public spaces, despite the city golf course across the street. It’s dense with apartments, most of which are low-income housing.

“Food access is definitely an issue here,” Olivas says. “The technical term is it’s a ‘food desert,’ but we don’t like to use that term because deserts are thriving ecosystems and thriving communities.”

Feed the Hood volunteers and interns transformed the space from compacted dirt to raised beds and planted rows. They added a shade structure and plan to eventually add an agro-ecology center, growing local leaders like Luzero Velasquez as they grow food.

Velasquez, a youth intern with SWOP, laughs when talking about how she initially couldn’t tell a weed from a vegetable. Now, she sees her work as part of a broader effort to improve her community. Gardening helps heal people who are dealing with violence in their community, she says.

“Just because you’re a part of a farming internship doesn’t mean it’s going to remove the violence from your community, but we can start working together to do it,” says McKenzie, who notes the Feed the Hood internship is now named after Donaldo Yañez-Reyes, an intern who was killed in Albuquerque in 2017.

McKenzie has watched community members grow up right alongside the crops, and he knows gardening offers lessons beyond when to plant, how to build compost and how best to harvest.

“Every season, we’ll learn something….you could put in a lot of hard work and sometimes bad stuff happens: sometimes you get a hailstorm, sometimes somebody vandalizes you, but it’s really a teachable moment that we can just keep planting,” he says. “We roll with it, yeah it’s a bummer, it’s sad, let’s grieve, but then let’s go, let’s keep planting, let’s do the next thing and let’s keep going.”

Resilience and resistance is part of the culture, McKenzie says. “We’re here to resist, to reclaim our food systems, our community spaces.”