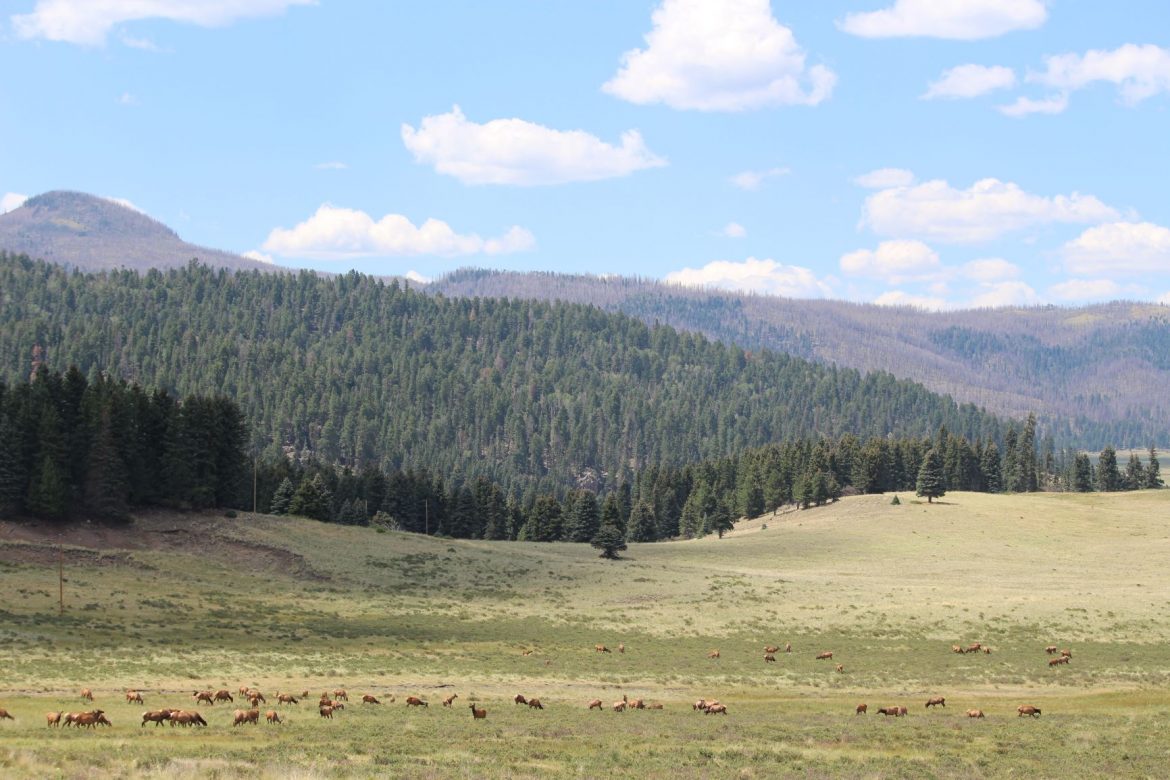 This week, there was a nice-looking elk herd up at the Valles Caldera. But despite the monsoons, the Valle Grande still looks pretty dry.

-The Carlsbad Current Argus reported that one oilfield worker was killed and another injured when a tank battery caught fire Wednesday near Loving.

-The U.S. Nuclear Regulatory Commission announced Wednesday that the public can request an adjudicatory hearing on the application a company has filed for a license to temporarily store 8,680 metric tons of spent nuclear fuel from commercial power plants, and to eventually store more than 20 times that amount between Hobbs and Carlsbad.

According to the NRC, the hearing—if granted—would be held before three administrative judges and could address issues of law or fact with the application filed by the company, Holtec International.

The deadline for requests is Sept. 14; requirements and procedures for requesting a hearing and petition to intervene are online at the Federal Register.

State Sen. Jeff Steinborn, a Democrat in Las Cruces, has been trying to get answers from Gov. Susana Martinez and her administration on more than 60 questions about the facility and the state’s ability to handle it. Steinborn is chairman of the Legislature’s Committee on Radioactive and Hazardous Materials. Maddy Hayden has that story.

Want to get the Environment Review in your email a day early? Sign up here!

-In case you missed our environment coverage this week, we’ve got a story about the Carlsbad Field Office of the BLM. The office has frequently been under fire from elected officials and industry for processing applications for permits to drill to slowly. Now, the agency is hearing from conservation groups that have asked the agency to defer leases it plans to offer for sale that are close to the boundary of Carlsbad Caverns National Park. We also feature a story from Matt Weiser at Water Deeply about how the oil boom in southeastern New Mexico is exacerbating the water wars between Texas and New Mexico.

-I don’t normally link to op-eds and editorials, but the fact that the Albuquerque Journal has weighed in on this issue seems like news in and of itself. On July 16, the editorial board praised Gov. Bill Richardson and Sen. Jeff Bingaman, both Democrats, for their “strong watchdog roles” during the process to open the Waste Isolation Power Plant and urged Martinez to give the people of New Mexico “straight answers and the safest possible project” when it comes to Holtec, too.

To read our past coverage of the issues, click here.

-The NRC’s public comment period for its scoping process on Holtec’s license for the HI-STORE Consolidated Interim Storage Facility is open until July 30. Comments can be emailed to Holtec-CIFEIS@nrc.gov.

-Russell Contreras of the Associated Press reports that New Mexico Attorney General Hector Balderas is seeking to void a 2003 land transfer from a historic land grant to a Colorado-based nonprofit.

-The Las Cruces Sun-News reports that legislators are suing over the transfer of Mesilla Valley Bosque from the State Parks Division to the Department of Game and Fish. According to a press release, the New Mexico Legislative Council, legislators don’t believe the New Mexico Energy, Minerals and Natural Resources Department, which oversees State Parks, has the authority to “eliminate a state park without consulting with the Legislature.”