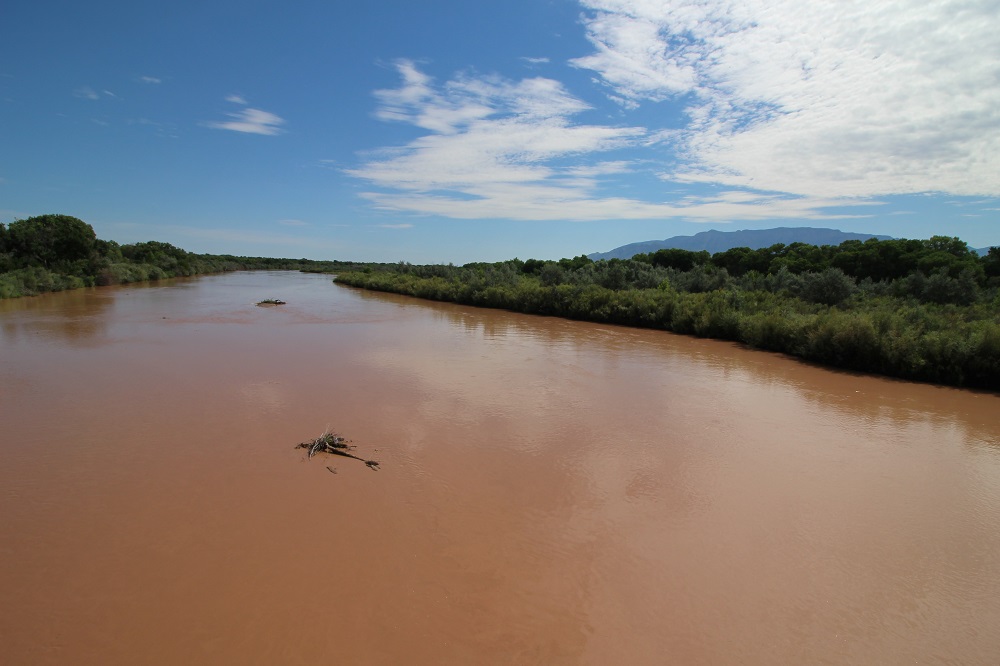 Earlier this week, the Rio Grande at Alameda saw a temporary bump in flows from storms upstream

Earlier this month, a trickle of water started flowing back into the Rio Grande near the Pueblo of Isleta. It wasn’t runoff from a thunderstorm or storm drain. Rather, it was part of a deal between Audubon New Mexico, local municipalities and The Club at Las Companas to put water in the river for the benefit of the environment.

After a poor snow season in the mountains, the Middle Rio Grande started drying in early April, when it should have been running high with snowmelt. As of Thursday, about 30 miles are dry south of Socorro and another mile is dry where the river flows through Isleta.

The Rio Grande will never be what it once was decades, nevermind centuries, ago. Demands and dams have changed the way it functions. And consistent warming in the region over the past few decades has altered snowpack, the timing of snowmelt and the amount of water flowing through the channel. In the coming years, maintaining even a semblance of a river through central New Mexico will mean making more changes, and perhaps taking a few chances.

“We’re really just trying to keep this ecosystem afloat and alive, when things get dry and there are a lot of demands on the system,” said Paul Tashjian, Audubon New Mexico’s associate director for freshwater conservation. “You get to tipping points, where it’s hard to get back, hard to restore this system.”

When the Rio Grande dries, it affects fish and wildlife populations, as well as the cottonwood forest

The nonprofit used money donated from the Bonneville Environmental Foundation and The Coca-Cola Foundation to lease water from the Town of Bernalillo, the Village of Los Lunas, the City of Belen and the Club at Las Companas, which provides water to golf courses near Santa Fe. Partners also include the Pueblo of Isleta, the U.S. Bureau of Reclamation, the Albuquerque-Bernalillo County Water Utility Authority and the Middle Rio Grande Conservancy District, which is responsible for moving the water from diversion outfalls into the river itself.

“We need to be able to make sure there are minimum flows out there for the river, otherwise things degrade, degenerate,” said Tashjian, who noted that his predecessor Beth Bardwell negotiated the the water release. Bardwell is a long-time advocate in New Mexico for environmental flows, or the right of rivers to their own waters.

If it seems strange to put water back into the state’s largest river, it’s important to know that the Rio Grande doesn’t “own” any of its own waters.  Every drop of water is meant for some human to use. And except when localized rainstorms send water shooting down Albuquerque’s North Diversion Channel or snowmelt pushes the brownish-red sediment of the Jemez River downstream, the Middle Rio Grande doesn’t actually run of its own accord.

Since the early- to mid-twentieth century, engineers and water managers have wrangled the river into a series of dams and diversions that are carefully managed on a daily basis. Each project was built with a specific objective: to drain and transform marshes into farms, allow for development within the river’s wide floodplain, and siphon the river’s waters for growing cities. Dam by dam, canal by canal, the Rio Grande was tapped and tamed.

In other words, the modern river is almost nothing like what it was in the past.

The Rio Grande today even gets help from another watershed. Water is piped in from tributaries of the San Juan River, which is itself a tributary of the Colorado River. And all of it is earmarked for specific uses.

On the Chama River, for example, El Vado Reservoir stores native Rio Grande water for the Middle Rio Grande Conservancy District and the six Middle Rio Grande pueblos. Heron and Abiquiu reservoirs store San Juan-Chama water. And Cochiti Reservoir, on the mainstem of the Rio Grande, is for flood control and recreation. Changing the purpose or use of any of these requires an act of Congress, no easy feat in the best of political times.

The current water release for the river can happen only because of a lawsuit.

For decades after construction of the San Juan-Chama Project in northern New Mexico—and before Albuquerque built its drinking water project—110,000 acre-feet of San-Juan Chama water supplemented the native flows of the Rio Grande each year.

Environmental groups feared that once Albuquerque and other cities started taking advantage of those water rights, the Rio Grande would suffer. They sued, trying to force the city to use that water to protect the river’s flows, rather than piping it all to customers.

Abiquiu Reservoir on the Chama River

Finally, in 2005, a settlement created storage space for an “environmental pool” in Abiquiu Reservoir. Then, groups could buy or lease water specifically for environmental flows and endangered species.

The roughly 1,000 acre feet of water from the Audubon deal will come out of Abiquiu to help keep the river flowing through Isleta for six to eight weeks.

It’s not a lot of water, and with continued high temperatures, there are evaporative losses, and thirsty ground, ready to suck up any water trying to dribble past.

But it matters, said Tashjian. All the individual acts of conservation matter, he said. And so does building relationships.

“We want to work conjunctively, and this year, we laid the groundwork for that,” Tashjian said. “Audubon can help find water Reclamation might not be able to find, and we can work together, ensuring a better future for the Rio Grande.”

The Bureau of Reclamation leases water to benefit endangered species, like the silvery minnow. Reclamation Spokeswoman Mary Carlson said the agency has leased, or is in the process of leasing, about 10,000 acre feet of water for environmental purposes this year. They’re using that water to keep drying from expanding within the Isleta reach of the river, she said.

The Middle Rio Grande Conservancy District’s Chief Engineer and CEO, Mike Hamman, said everyone is trying to maximize all the benefits in an austere year, for the users they supply as well as for endangered species and the environment.

“All the agencies are looking for every possible opportunity to continue managing water appropriately, and also with an eye toward keeping as much of the river as wet as we possibly can,” he said. They’re doing that, he said, not only to protect federally-listed endangered species, but for the quality of the ecosystem. “It’s the right thing to do,” he said, “if you have the flexibility and willingness to do it.”