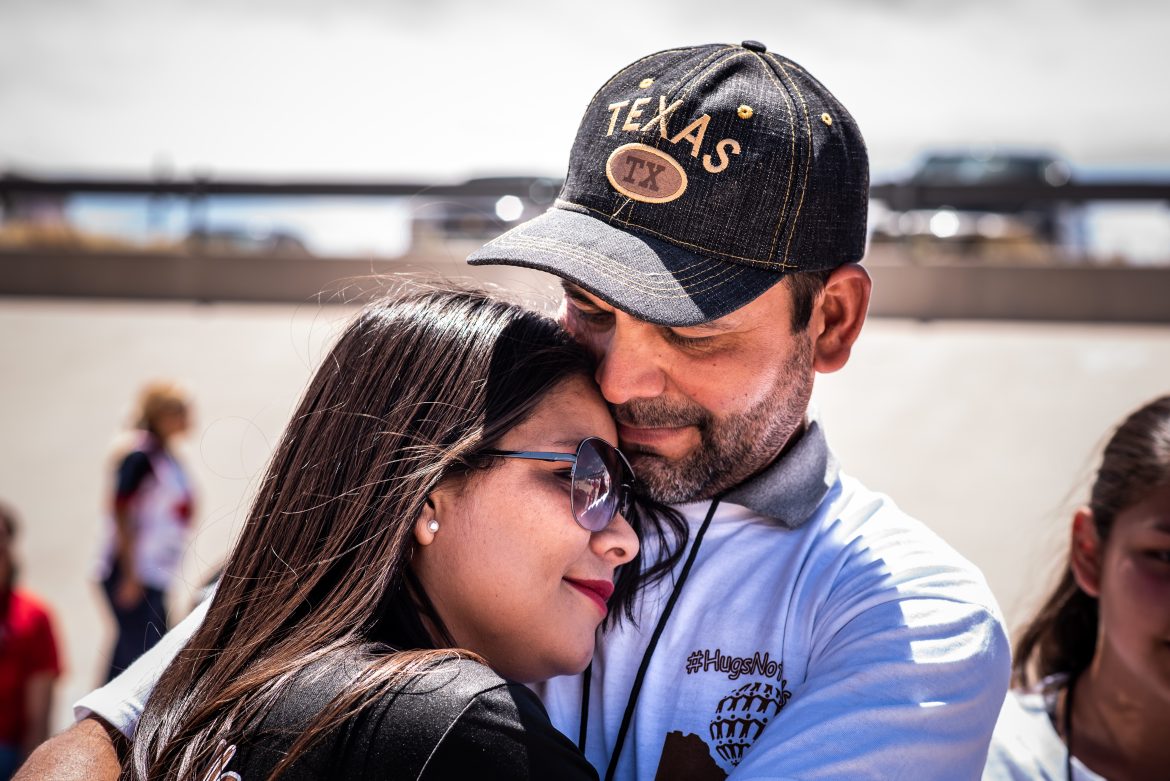 Gabriela Castañeda and Adrián Hernández at the border at the Hugs Not Walls Event, 2018.

EL PASO, Texas and VALLE DE JUÁREZ, Mexico – Gabriela Castañeda and Adrián Hernández were lovestruck teenagers when, in 2002, they crossed the border to start a life together far from the violence-plagued valley east of Ciudad Juárez.

They never imagined the border would one day keep them apart.

The two made a home for themselves in a colonia east of El Paso — Adrián working construction for big U.S. homebuilders, Gabriela keeping house and raising their growing family. But driving long distances to work left Adrián exposed. He picked up traffic violations that led to deportations. And even as the prison sentences grew longer with each illegal crossing, he kept returning — illegally — to his wife, daughter and two sons.

It took six deportations, and more than 10 years in prison over five different stints, before he gave up trying to get back.

Every day, federal courtrooms in New Mexico and West Texas are filled with immigrants charged with illegal re-entry who claim they were trying to return to a spouse or children. A 2015 report by the U.S. Sentencing Commission showed that more than two-thirds of immigrants charged with illegal re-entry had relatives living in the U.S. other than children, and half had at least one child residing in the U.S.

Today, Gabriela lives in the same mobile home and is applying for legal status. She stays for many reasons — her job, her children’s education and, most importantly, she says, access to specialized medical care for a son with a life-threatening congenital heart defect. Adrián lives on the outskirts of Ciudad Juárez, two blocks from the border wall.

“I love my husband,” she says. “Even though he is not with me, in my mind we are going to be together someday. We’re going to grow old, and we’re going to see our children get married.  That is the idea I have had since the first time I saw him. I tell him, ‘Wait for me, please.’”

The couple’s children — ages 15, 14 and 12 — are U.S. citizens and crisscross the border like so many border kids do, acting as bridges between families divided. They live with Mom during the week and stay with Dad on weekends.

The oldest, April, was home the morning in summer 2014 that U.S. Immigration and Customs Enforcement agents surrounded the house and took her father away. Husband and wife haven’t lived under the same roof since.

Gabriela and Adrián share the story of their family and the border that divides them with Searchlight New Mexico — she from her office at the nonprofit Border Network for Human Rights; he from the living room of a rented home with bars on the broken windows.

Gabriela: The day I noticed him was the first day of high school. When I saw him, I thought, he is the most beautiful man I have ever seen in my life. I couldn’t stop looking at him. I never before believed in love at first sight, but I had just discovered it was possible.

Adrián: She went to the United States for one year [in high school] and came back changed. She was more of a woman. We were in the same class, and we graduated together.

G: I didn’t have money for college. My mom decided, ‘There are no jobs here and as far as education, it’s over. We’re going to have to leave.’ We decided to come to the U.S. to work — me, my mom and my younger sister. [Adrián] talked to my mom and said, ‘I want to go with you. I can help you pay rent and work and I want to be with Gabriela.’

A: At that time, the situation was getting very difficult here [in Juárez] with the violence, and there wasn’t much work. We both had the laser visa [a tourism permit], so we went in legally. All of our children were born in the United States.”

Over the next couple years, Adrián would occasionally cross the border using his tourist card, to see his parents. On one of those trips, U.S. customs officers stopped and questioned him.

A: They told me they knew I lived in the U.S. They took my visa and deported me. It was 2003. I remember because Gabriela was pregnant with April. So I had to get back — illegally this time. I crossed the river. Back then, there was no wall, just the river. I went at midnight.

Adrián made it back in time for his daughter’s birth. But during the next three years, he would get deported three more times, serving two 60-day sentences for illegal re-entry and another 10 months when he was caught driving with undocumented family members in the car. Each time, he returned illegally.

In 2007, he had been reunited with his family for two months and was working construction when a sheriff’s deputy pulled him over for speeding and called Border Patrol. When Gabriela got the call, she rushed over the traffic stop just two miles from home.

G: I was telling this guy — the sheriff’s deputy — ‘You know he’s not a criminal! Do you know what you do? He’s going to jail, and I don’t know when my family is going to be able to see him again.’

The same federal judge in El Paso who sentenced Adrián to 10 months now gave him six years in a California federal prison — a longer sentence for a lesser charge, illegal re-entry, that was compounded by his previous deportations.

G: My children were constantly asking me — they were 5, 4 and 2 years old — ‘Where is my dad? I miss my dad.’ And I would lie to them. I would tell them, ‘Your dad is in California and he’s working very hard so he can buy you all the toys that you’ve ever wanted.’ But after so many times, I ran out of lies. I remember one day my daughter said, ‘Mom, please ask my dad to come back. I don’t want the toys anymore.’

Gabriela struggled to find work without a Social Security number. She scoured illegal dumps for mattresses and sold the steel coils to recycling centers. She cleaned trailer lots in Agua Dulce, the poor colonia where she lives.

G: I remember one day when we didn’t have anything to eat. Nothing. I had a tomato sauce and three corn tortillas. So I did entomatadas, and I gave one tortilla to each of the kids. And then I remember April asking me, ‘Mama, you’re not going to eat?’ And I said, ‘No mi’ja, I already ate. You eat.’

Adrián finished his prison sentence in February 2013 and was deported. He returned to Juárez, where he worked at a maquila an assembly factory for several months until one day in November he raised a 19-foot ladder against the 18-foot steel fence and slid down a pole on the other side “like a firefighter.” The family reunion lasted a few months.

A: I was practically a stranger to [the children]. The three of them didn’t know me. I had spoken to them by phone occasionally when I was in prison. But we didn’t have that father-child communication. I had to win their confidence and their respect until they started to see me as their father.

G: We were always very united when we were together. He would arrive home at 5 p.m., eat with us, play with [the children], stay with me and watch a movie. We were that kind of family.

A: We were always together. We would go out to eat or to the park. We liked to stay home, watch television or a movie — a tranquil life. I worked Monday to Friday and sometimes on Saturday. She took care of the house and the children.

G: I opened the door. And they said, ‘Are you Gabriela Castañeda?’ I knew what was going to happen. They said: ‘We got a report that your husband is illegal again in the country. Ask him to come out. And if he doesn’t come out, we will wait here until he does.’ My husband was behind the door listening to everything.

A: I looked out the window and I saw them — ICE. There were a lot of them, armed, and they surrounded the house as if I was a criminal. My boys were on their way to school but the one who had to see it all was my daughter. She was young, just 11 years old. It was very traumatic.  Even today she can’t talk about it.

G: When I felt all was lost, that they were going to take him, I started crying. I said: ‘He’s not a bad person. He’s not a criminal. Please, don’t take him! Please, he just came back.’

A: I remember — this is really painful for me — we hugged, Gabriela and me and my daughter. They were crying. It was so hard watching my daughter cry. They practically ripped me away from my wife and children. We had gotten back together, and we were finally living the life of a normal family. Three more years they gave me in prison.

After so many years in the shadows, Gabriela turned herself in and pleaded for relief under a provision of the immigration code. She made a claim that her deportation would cause “extreme hardship to a U.S. citizen” — her middle son Abraham, who is in immediate need of a third open-heart surgery.

These days, she works legally as communications director for the Border Network for Human Rights under a temporary work permit while she awaits a resolution in her case.

A: I understand the laws. The laws are very strict with undocumented people. Some of us, we make mistakes — I’m not saying we don’t — but I’m not the criminal that my record reflects. I’m a family man, a working man.

April, Abraham and Jacob, the youngest, attend school in El Paso and cross the border each weekend to see their father.

G: Every single weekend that I send them, I tell them, ‘Enjoy the time with your dad because I wish I could be able to do that.’ When they come back I start asking them a lot of questions. How was it? Where did he take you guys? Was he happy? I want to see pictures, to see what he was wearing on a particular day.

The immigrant is seen as worse than the worst criminal. …All the damage that his absence has caused my children! My children are U.S. citizens. It seems like this government isn’t taking into consideration that they’re hurting their own citizens — or maybe they don’t care because those citizens are children of immigrants.

An immigration judge will hear Gabriela’s case in late August.

A: I tell her, ‘We’ve been separated for so many years — all the years I was in prison and the years here. What’s going to happen in the future? She isn’t going to be able to come here unless she fixes her papers. And if they never get fixed?

G: My children are everything for me. I am suffering — staying in a country alone as a single mom, arriving home and nobody there to wait for me — because I am putting the interests of my children before mine. I want them to have an education. I want Abraham to have a better chance of surviving. I tell my husband, ‘Adrián please understand me, I love you more than anything. But not more than my children. Not more than them.’