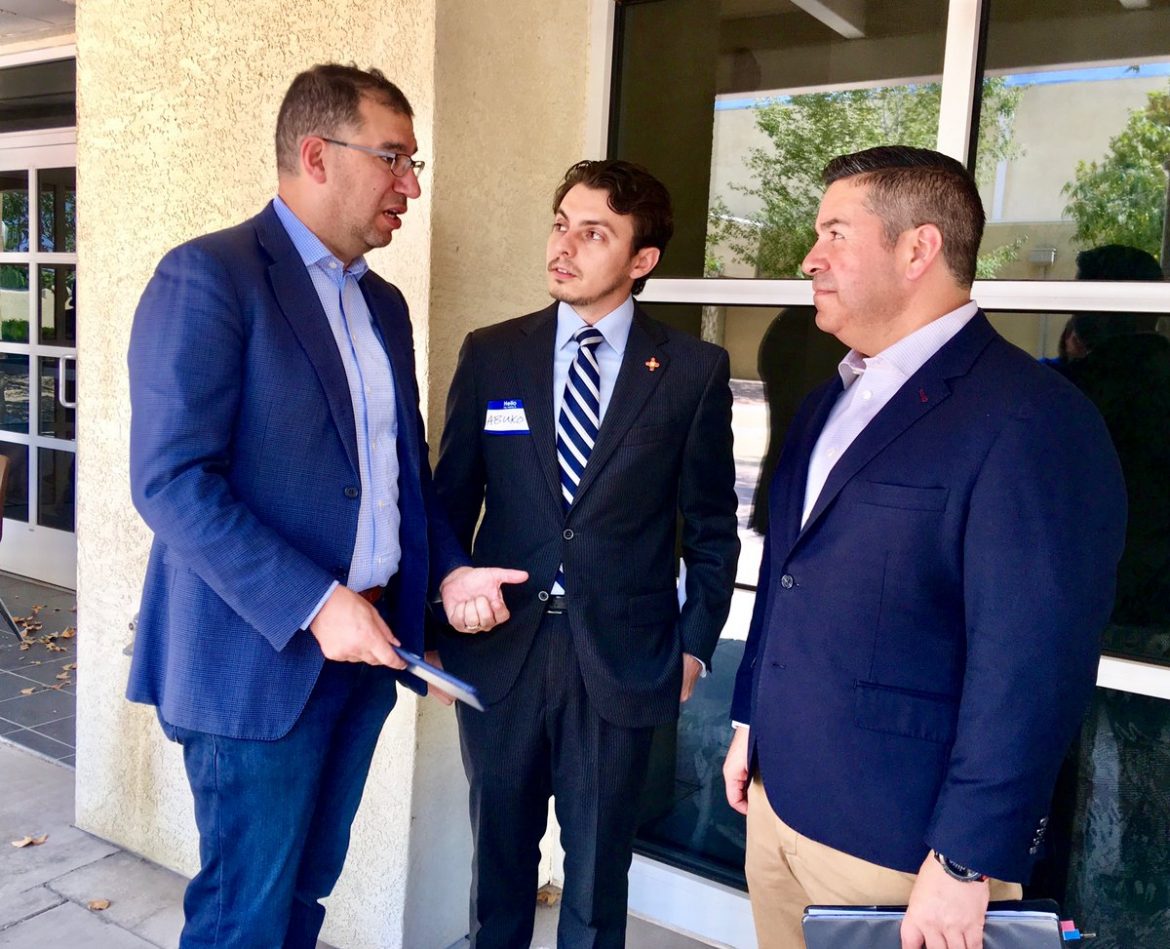 (l-r) Andy Slavitt, Board chair US of Care,and former Acting Administrator for the Centers for Medicare and Medicaid Services, supervising attorney for the healthcare team at New Mexico Center on Law and PovertyAbuko Estrada and Democratic U.S. Rep. Ben Ray Lujan

Althea Yazzie, from McKinley County, said it was a slow build toward her support of Medicaid buy-in.

But when her grandson was born premature and her son and his wife were stuck with an unexpectedly large bill, she started advocating for the option. That option would allow people to pay a premium, like for private insurance, to buy into Medicaid or a Medicaid-like program.

Earlier this year, the state Legislature passed a memorial authorizing a study into the viability of Medicaid buy-in for the state.

Supporters say this would not only save money for those buying in, but also for the state and hospitals.

Yazzie and others gathered at the Our Lady of the Most Holy Rosary Catholic Church Monday, the 53rd anniversary of when President Lyndon Johnson signed a bill creating Medicare and Medicaid, to discuss the option.

The New Mexico Center on Law and Poverty helped organize the event, but the organization’s supervising attorney for healthcare, Abuko Estrada, said it was people like Yazzie who pushed the proposal forward.

“I think it goes back to community here in New Mexico being so strong and having that understanding that no family should go without health coverage because they can’t afford it,” Estrada said. “We’ve worked with families across the state to take that message to everyone and to really build upon that foundation.”

Yazzie says friends and neighbors have encouraged her.

“People are just for us and they tell us to just fight for them. That’s how we got this whole thing going,” Yazzie said. “We went on the media, we went out talking to people, we got people to come in and support us.”

A leader in the space

Lujan said that Medicaid is a key way to expand access to health care in a way that is affordable, accessible and high-quality.

“I would argue, in New Mexico where we have over 40 percent of New Mexicans who are benefiting from Medicaid, that we already have a large pool,” he said. “So a buy-in program in New Mexico can build upon that success.” It would be another choice for people to find coverage, he said, and the infrastructure is already in place.

Andy Slavitt, a former Acting Administrator of the Centers for Medicare and Medicaid Services under President Barack Obama, agreed that New Mexico could lead the nation. About a dozen other states are considering Medicaid buy-in programs, he said, but New Mexico is furthest along in the process.

“I think if New Mexico keeps its plan together and keeps working and gets everybody involved, it could be the first state in the nation and a shining light, much in the way Massachusetts was when Romneycare passed it became a model,” he said.

Something that can be done now

While Medicaid buy-in would expand health care options, there is another, more drastic solution: Medicare-for-all.

This single-payer system would insure all Americans without co-pays or premiums. A study from a libertarian think tank estimated it would cost the federal government $32.6 trillion over ten years—but overall health spending in the United States would actually be less than with the current system.

“I think [Medicaid buy-in] is an option that can be achieved sooner while other options will continue to be debated, looking at the thresholds required to get those implemented as well,” Lujan said.

He also noted that U.S. Sen. Bernie Sanders, the Vermont independent who is sponsoring the Medicare-for-all bill, is also co-sponsor of the Senate version of the Medicaid buy-in bill.

Lujan takes a pragmatic look at the issue.

“The idea here is how do we build the conversation and ultimately get this passed and implemented to provide more opportunities, affordable care, accessible care and high-quality care to people across New Mexico,” he said.

For an increasing number of Democrats, Medicare-for-all is the ultimate goal, something Kimberly Espinoza, Lujan’s health advisor, acknowledged.

“The Congressman’s obviously working very hard in his other role as a reality in a blue house, but there’s still so many hurdles,” she said. “And while we’re jumping those hurdles at the federal level, people are going without coverage.”