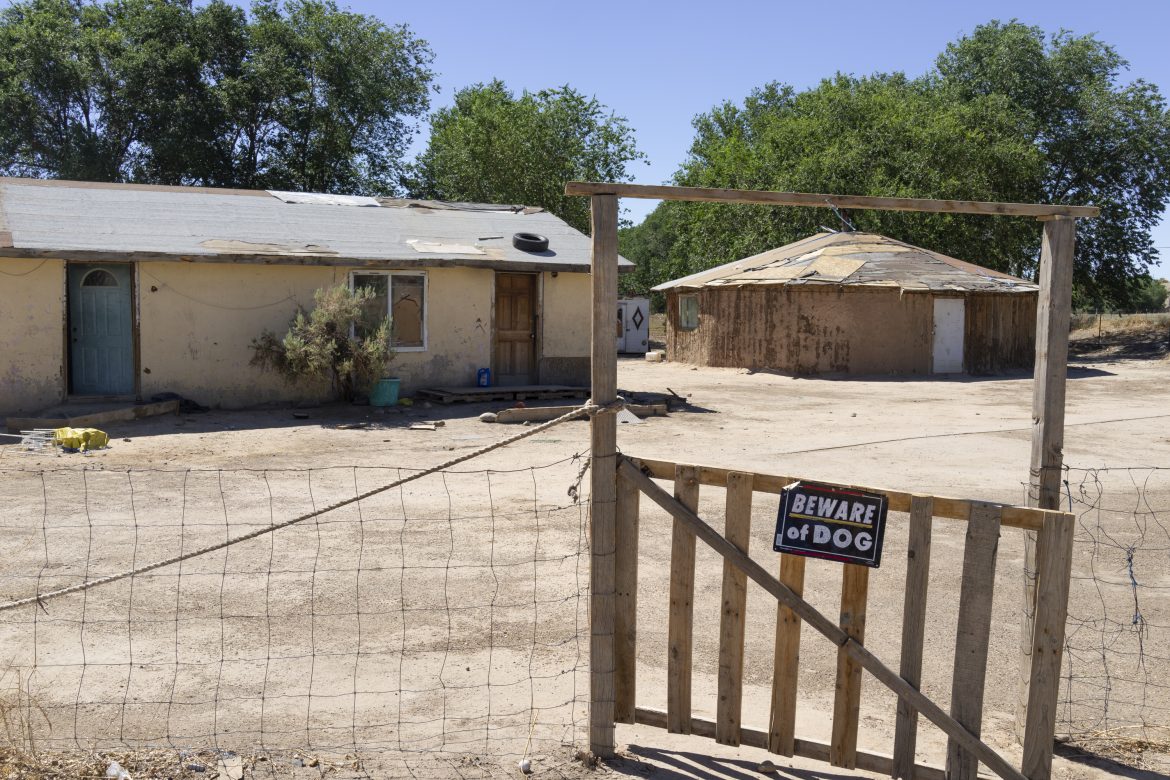 A house and hogan on the Farm Road, Shiprock, Navajo Nation.

You won’t find James Ironmoccasin’s house on Google Maps. To get to his place on the northeastern edge of the Navajo Nation, head east from the 7-2-11 gas station on Highway 64 in Shiprock, take the sixth turn into “Indian Village,” a neighborhood of small, unnumbered houses on a winding, ungraded and nameless dirt lane, and follow for about a quarter mile, then turn at the dilapidated corral of horses.

If he’s expecting you, Ironmoccasin, his jet-black hair parted to one side and a string of bright, traditional turquoise beads hanging around his neck, will be waiting to flag you down.

“If you are kind of familiar with the area, and you’re good with directions, it’s OK,” he says with a chuckle. “I try to give the easier route.”

Though his family has lived on this square plot of land for the past 60 years, he says he can’t remember a time when any one of them — not his parents, not his sisters, not his brother, and certainly not himself — was counted in the decennial, or 10-year, U.S. census.

“Living on the reservation, I just don’t feel like we are fairly accounted for,” he says. “When it comes down to numbers, or state funding, or government funding, or even tribal funding, I am very offended that we have been put on the back burner, neglected.”

The Land of Enchantment is well known, among other things, for a history of undercounting its people. In 2000, the undercount amounted to nearly 2 percent or about 35,000 people missed, according to the Census Monitoring Board. And though the problem was substantially corrected in 2010, the correction, as it turns out, was a temporary fix.

That is in part because the U.S. Census Bureau is moving to an online survey, introducing cost-cutting measures, new technology and a reliance on the internet to count every resident in the country. The approach is problematic throughout the U.S., but nowhere more so than in New Mexico, where, according to the Bureau’s own statistics, only 67 percent of households have broadband internet subscriptions.

Funding for the Census Bureau is a major concern, and public pressure has been growing to address the issue. Political representation depends on an accurate count as congressional seats are awarded according to a state’s population numbers.

In March, the U.S. House of Representatives allocated $2.814 billion for the Census Bureau in 2018 — nearly double the 2017 budget and about $1 billion more than President Donald Trump requested.

Even so, census experts, including former directors of the bureau, fear the budget is insufficient to fund the necessary preparations for the 2020 Census.

“The time that’s been lost and the opportunities that have been lost cannot be made up,” said Cynthia Guy, vice president for Research, Evaluation, Evidence and Data at the Annie E. Casey Foundation.

The stakes are huge — especially in a state such as New Mexico, which depends on federal funding for programs that lie at the heart of child well-being. Of the 300 federal assistance programs that rely on the census, the largest is Medicaid, which in 2015 distributed about $2.4 billion in assistance to New Mexico. In order to receive the appropriate federal funding for these programs for the next 10 years, New Mexico needs an accurate representation in the census.

The George Washington Institute of Public Policy (GWIPP), an independent public policy research group in Washington, D.C., analyzed the fiscal cost of an undercount on a state-by-state basis and identified the five programs most impacted.

They are Medicaid, the Children’s Health Insurance Plan (CHIP), Title IV-E Foster Care, Title IV-E Adoption Assistance, and the Child Care and Development Fund. Taken together, the cost to New Mexico in 2015 amounted to $2.6 billion for these programs.

“But remember, we’re stuck with that error for 10 years, so a 1 percent undercount costs us $400 million dollars just for Medicaid,” said Robert Rhatigan, who as co-chair of the New Mexico Decennial Census Focus Group Subcommittee oversees the 2020 count for the entire state.

But as important as these five programs are for New Mexico’s children, they represent only a fraction of the state’s funding that could be affected. Census data also guide funding for programs including the Supplemental Nutrition Assistance Program (SNAP), Head Start and Special Education. There were 11 additional federal programs identified by GWIPP. Those 16 programs amounted to more than $6 billion in funding for New Mexico in 2015.

“It would mean that we would receive less funding for programs that are essential to economic and educational well-being,” Wallin said. “The stakes are really high that the census be conducted accurately.”

Budget cuts over the past few years have forced the Census Bureau to reduce staff and limit field testing, leading the Government Accountability Office to add the 2020 census to its High-Risk list. In its report, the GAO cited “new procedures and technology that have not been used extensively in earlier censuses, if at all” as reason for this rating. “While these innovations show promise for a more cost-effective head count, they also introduce risks,” it noted

The risks are especially acute for New Mexico, which holds the dubious distinction of being the single hardest state to count in the country. It has earned that designation due to its large rural population, its vast stretches of hard-to-count land, and the deep poverty that characterizes so much of the state.

New Mexico also has the highest concentration of at-risk groups in hard-to-count areas, according to a 2017 report by the Leadership Conference on Civil and Human Rights, a legislative advocacy organization focused on civil and human rights.

In southern New Mexico, local governments are facing their own hurdles. Populations in some areas have grown substantially since the last decennial census, due in part to growth in neighboring El Paso and job opportunities stemming from industrial development around Santa Teresa. Some of the growth is from another source: new immigrants from south of the border who fled to southern New Mexico as drug violence ravaged their homeland.

But as the federal government has ramped up immigration enforcement, tension and mistrust between immigrant and mixed-status households has risen, making many residents wary of sharing information with the federal government. Many in these communities say the planned addition of a citizenship question has made them even more wary of participating in the 2020 census.

For those living on the Navajo Nation, an absence of street names, house numbers or tangible proof of physical address presents with many challenges. People without an address cannot get state identification or a driver’s license. They can’t receive Fedex, UPS or even postal service deliveries. If residents are lucky, there may be a post office nearby where they can rent a box, but even those are scarce.

“Across Indian country, not just the Navajo Nation, most of those folks rely on P.O. boxes, which means they are essentially off the grid when it comes to the census,” said Gabriel Sanchez, executive director of the Robert Wood Johnson Foundation Center for Health Policy at the University of New Mexico.

That’s part of the reason the Navajo Nation is so hard to count. The census requires a physical address to send the form; a P.O. box is not acceptable. Without a mailed form, the Census Bureau is left with one option for counting the population.

“They have to hire somebody to go walk and find those places,” Sanchez said.  “In my mind, the money is not there to do that.”

In rural parts of New Mexico, and particularly on the Navajo Nation, the census will rely on Update Leave Operation, a last-ditch effort to manually find and count houses that did not receive the form in the mail.

“Where you have these chapters and individual homes scattered throughout a vast area as large as a New England state, if those addresses are missing from the Census Bureau address list, then they are not going to be counted,” Rhatigan said.

“A census can only be as good as the address list that informs census enumerators where to go looking for people,” Rhatigan said.

Searchlight New Mexico is a nonprofit, nonpartisan news organization dedicated to investigative journalism. Read more of our stories on Raising New Mexico at projects.searchlightnm.com/ and donate at https://www.newsmatch.org/organizations/searchlight-new-mexico

Reporter Christian Marquez can be reached at christian@searchlightnm.com.