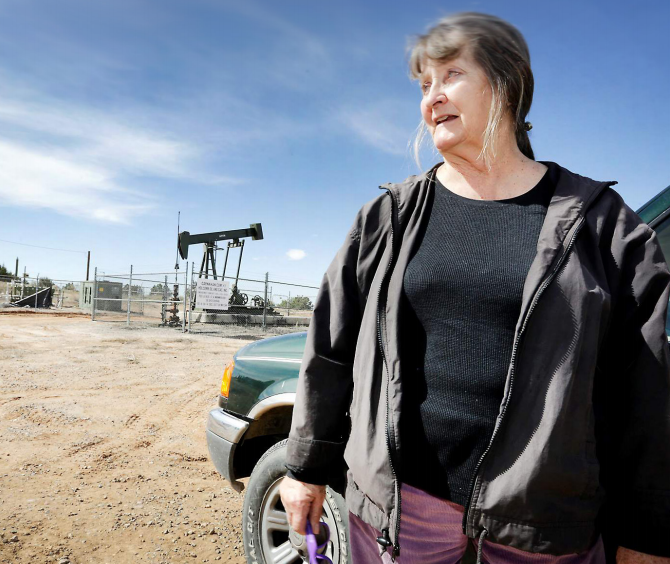 N.M. – A New Mexico woman who has spent her life in the San Juan Basin near hundreds of oil and gas wells says she’ll continue her fight for a cleaner environment despite her own health issues.

Shirley McNall is profiled in a report by the group Moms Clean Air Force about the consequences of living near oil and gas drilling. In the town of Aztec, McNall takes journalists and other visitors on what she calls a “Toxic Tour of Hell” in northwest New Mexico, which she said includes residential neighborhoods dotted with leaky gas tanks, oil on the ground, fumes venting into the air and nonstop compressor noise.

McNall said it’s important to demonstrate to others what many people live with, “to show ’em how we live, all over the United States now, with these dangerous little industrial sites right next to our homes and our schools and our churches. Aztec has over 110 gas wells in our little town.”

Under the Trump administration, oil and gas is experiencing major growth and contributing to New Mexico’s economy, but health and environmental groups have said the boom also means increased rates of asthma, cancer and other health ailments related to air pollution.

The oil and gas industry is allowed to drill as close to a house as 100 feet in San Juan County, and McNall said she lives about a half-mile from eight gas wells.

“Because they just come in, and if they want to drill by your house, they drill,” she said. “You don’t have any control over whether or not they can drill.”

McNall said she realizes that as one of the poorest states in the nation, the boom-and-bust energy industry benefits New Mexico’s economy when times are good. However, she also said she worries about the thousands of children who attend school or day care in close proximity to oil and gas infrastructure.

“I always make a point of saying, ‘I realize we need the energy and we need the jobs. But our health and our safety shouldn’t be at risk’,” she said.

The Moms Clean Air Force report profiled six other women, in states from California to Pennsylvania, who are “face to face” with oil and gas pollution in their daily lives.

More information is online at momscleanairforce.org.