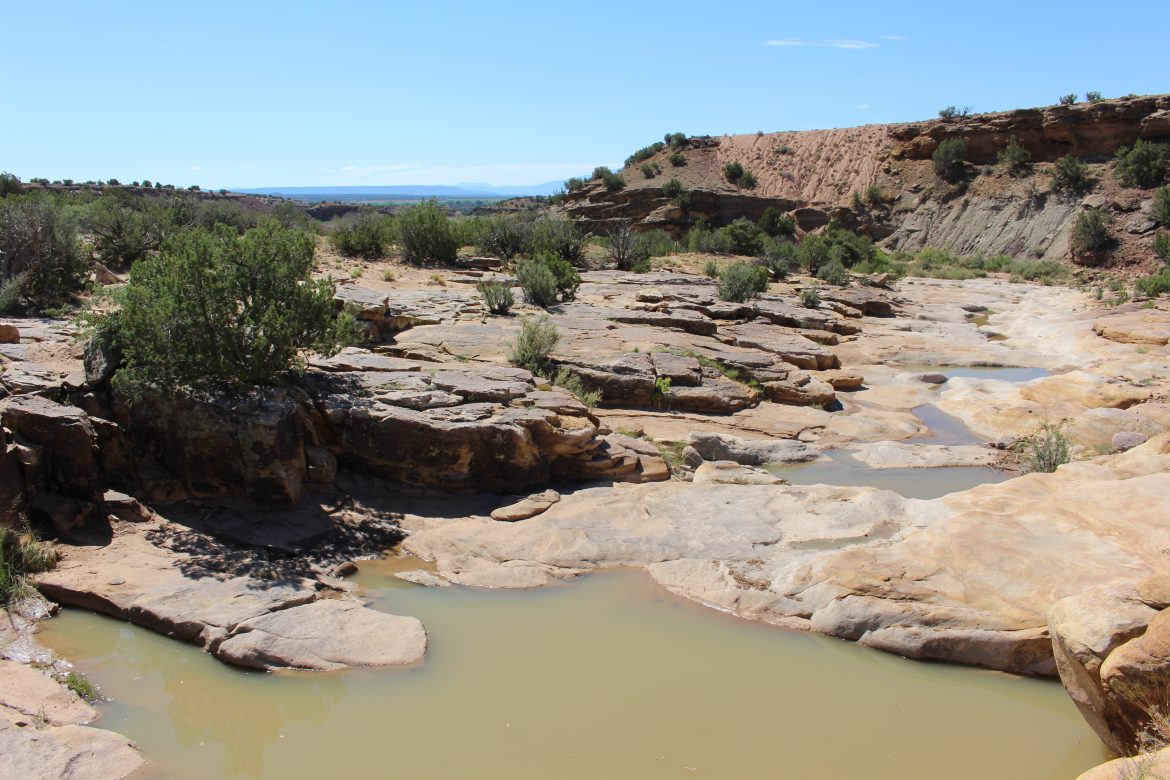 -In High Country News, Cally Carswell of Santa Fe pondered climate change and New Mexico’s future. You can read her essay, “Drought, dread and family in the American Southwest” here.

–Cody Hooks with the Taos News is taking a three-part look at drought in New Mexico. His first story is on the state’s water planning process.

–If you missed it a few days ago, New Mexico State Engineer Tom Blaine dismissed the Augustin Plains Ranch water application as “speculative.” Locals are happy, though wary, and the company called the move “short-sighted.” Here’s the story. At NMPR, we also wrote about drought and El Niño. (And found Gov. Susana Martinez still hadn’t convened the state’s Drought Task Force.)

–Ryan Lowery with the Las Vegas Optic reported on a land-access dispute in northern New Mexico involving the State Land Office. According to the story:

[Henry] Ortiz estimates there are about eight people who own land that is accessible only by the road. He said the Land Office is asking each of the landowners to purchase an easement that would give them right of way to access the road. The cost, he said, is nearly $10,000.

“Right now, we’re being labeled in violation essentially,” Ortiz said. “We are trespassers. We are unauthorized. My great-grandfather used to go through the same place in an oxcart.

-Proponents of the SunZia Southwest Transmission Project appeared before the New Mexico Public Regulation Commission last week, seeking approvals related to the transmission line’s location. According to a story from Nicole Maxwell in the Alamogordo Daily News, the hearing officer endorsed a right-of-way proposal but recommended the PRC deny the proposed route through seven counties for not adequately considering local zoning and land-use rules. Maxwell wrote that SunZia plans to file exceptions before an August 10 deadline and plans to address the officer’s concerns.

According to Adrian Hedden’s story in the Carlsbad Current-Argus:

…the [U.S. Nuclear Regulatory Commission] does have the right to license “privately-owned, away-from-reactor” storage facilities, to temporarily hold the waste in the absence of a permanent repository, Balderas wrote, despite opposition from host states.

–KUNM’s May Ortega reported that the National Science Foundation awarded the Sevilleta Long Term Ecological Research Program a multimillion-dollar grant to study the long-term effects of drought and extreme precipitation on the environment.

-The Las Cruces Sun-News has a piece explaining why New Mexico businesses should be planning ahead for natural disasters.

-The Albuquerque Journal’s Rick Nathanson wrote about two Red List assessors for the International Union for the Conservation of Nature who are working at the ABQ BioPark.

-A former Richardson administration official—and former Albuquerque Journaleditorial page editor—had a guest column this week about a court ruling he says could limit pueblos’ water rights. Bill Hume wrote in the Albuquerque Journal of a ruling in the Abousleman adjudication of the Rio Jemez involving the rights of non-Indian water users plus the pueblos of Jemez, Santa Ana and Zia:

A hitherto obscure water adjudication is poised to set a standard for pueblo rights, one that could significantly limit them.

–Russell Contreras with the Associated Press reported that next year, the National Cancer Institute might finish a long-awaited study of cancer risks among New Mexicans who lived near the Trinity Site during the 1940s. According to the story:

Tina Cordova, co-founder of the Tularosa Basin Downwinders Consortium, said descendants have been anxiously waiting for results from the National Cancer Institute study. But Cordova said she worried the questions researchers used were “culturally insensitive” and for months the institute wasn’t communicating about the study’s progress.

“We had been kept in the dark,” Cordova said.

-Seventy-three years ago this week, the United States detonated atomic bombs over the cities of Hiroshima and Nagasaki.

It’s worth going back to read John Hersey’s August 1946 reporting about the devastated city:

A tremendous number of schoolgirls—some of those who had been taken from their classrooms to work outdoors, clearing fire lanes—crept into the hospital. In a city of two hundred and forty-five thousand, nearly a hundred thousand people had been killed or doomed at one blow; a hundred thousand more were hurt. At least ten thousand of the wounded made their way to the best hospital in town, which was altogether unequal to such a trampling, since it had only six hundred beds, and they had all been occupied. The people in the suffocating crowd inside the hospital wept and cried, for Dr. Sasaki to hear, “Sensei! Doctor!,” and the less seriously wounded came and pulled at his sleeve and begged him to come to the aid of the worse wounded.

There’s also Stewart Udall’s 1994 book, “The Myths of August: A personal exploration of our tragic Cold War affair with the atom.” Udall writes of what he unearthed about what was then called the Atomic Energy Commission (“one of my generation’s sacred cows”) and the Cold War. It’s a book that’s even more relevant today.

Consider these words in the first chapter:

As I looked back in the 1980s, it was painfully evident that the United States of America had paid a heavy moral and political price by ignoring the open-government commands of our Constitution. To me, it was no accident that most of the blunders that have marred the history of our nation over the past half-century were the outgrowth of secret decisions made by presidents and by unelected national security wizards. To recite the names of these blunders–Hiroshima, Nagasaki, the Bay of Pigs, Vietnam, Watergate, and Iran-Contra–is to underscore lessons of history the next generations of Americans should never forget.

-In a new paper in Nature Climate Change, scientists look at how projected rainfall increases in western mountains will affect flooding. They found that flood risks are particularly notable for the Sierra Nevada, the Colorado River headwaters and the Canadian Rockies.

And they note that even as rain-on-snow events with flood potential increase as the region continues warming, flood control and water managers may not have all the information they need to understand flood risks.

Our results suggest that increases in ROS water available for runoff coupled with a greater proportion of precipitation falling as rain, and increased rainfall intensity, should be considered in flood control planning. The largest increases in ROS runoff are projected for mountainous river basins that are historically prone to flooding and/or in regions where the storage and transport of snow water resources are paramount.

In other words: places that depend on snowmelt for reservoirs and places that tend to flood already better start planning for increased flooding as the region warms. (I’m looking at you, New Mexico.) To read the study: https://www.nature.com/articles/s41558-018-0236-4

-Lastly, the Proceedings of the National Academy of Sciences published a crucial new piece this week, “Trajectories of the Earth System of the Anthropocene,” in which the authors explore the risk of the Earth System crossing a planetary threshold that would lead to even high global average temperature increases than are currently predicted. (You may have seen references in the news this week to a “Hothouse Earth.”)

According to the authors:

Our analysis suggests that the Earth System may be approaching a planetary threshold that could lock in a continuing rapid pathway toward much hotter conditions—Hothouse Earth. This pathway would be propelled by strong, intrinsic, biogeophysical feedbacks difficult to influence by human actions, a pathway that could not be reversed, steered, or substantially slowed.

I know. It’s rough news. But do check out the paper, which is remarkably readable, and also includes figures that could be useful in a classroom.