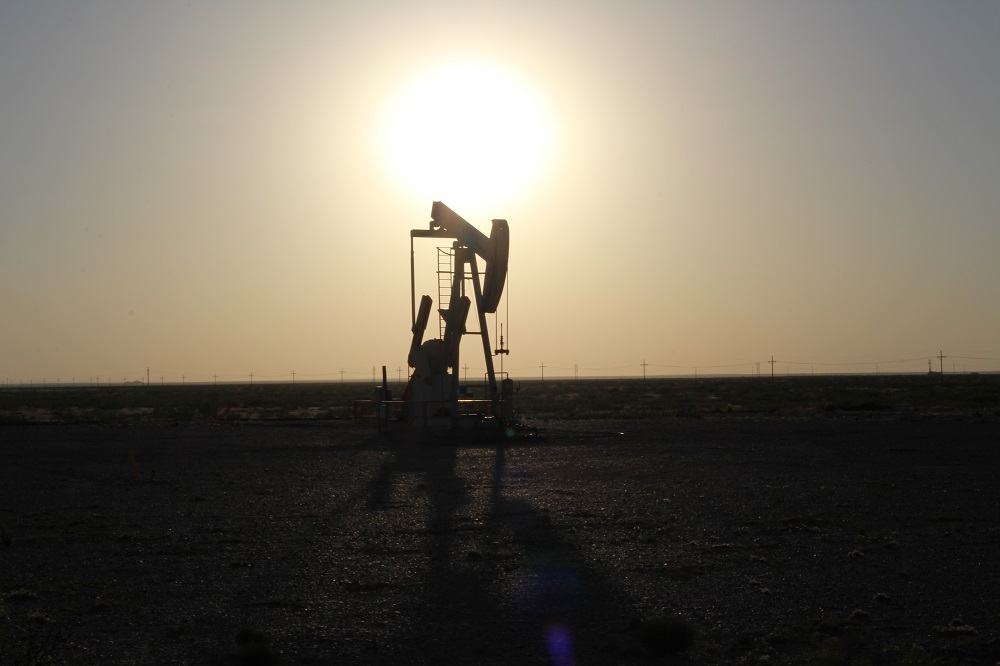 When drilling wells, operators inject chemicals, sand and water underground to create fissures that help move oil and natural gas to the wellhead more efficiently. That practice of hydraulic fracturing, or fracking, uses a lot of water. And it leaves behind a lot of water, too.

In 2015, even before the Permian Basin really started booming, industry produced 900 million barrels of wastewater. That’s about 116,000 acre feet—or almost all of the water currently stored in Elephant Butte Reservoir.

Today the Permian Basin is shot through with even more wells—30,000 just on the New Mexico side of the line—and rigs sink more each day. Fracking just one requires about 30 million gallons of water. And afterwards, almost all of that water is re-injected back into the ground, disposed of in what are called Class II wells.

Now, New Mexico is exploring how that wastewater could be reused—and maybe, how to stop using fresh water for drilling in the first place.

This summer, New Mexico signed an agreement with the U.S. Environmental Protection Agency and formed a working group to bring together regulators, scientists and policymakers. The memorandum of understanding relates to “proactively clarifying and understanding the existing regulatory and permitting frameworks, and associated policy decisions among the parties related to the re-use, recycling, and beneficial use of waters originating from oil and gas activities.”

The state initiated the process, said Rob Lawrence, EPA’s Region 6 energy adviser. “There are a lot of people who are asking, ‘Is disposal the best approach to manage produced water?’”

In Oklahoma, for instance, the re-injection of produced water has over-pressurized underground formations and triggered earthquakes.

“Other people have raised the issue of, ‘Is this the best use of freshwater that has been used once?’” Lawrence said. “Can’t we treat it and extend the value of it for other purposes as well?”

The working group will consider scientific, legal and regulatory issues, and its members will include experts in the oil and gas industry, water law and federal and state regulations. Before the water could ever be reused anyplace outside the oil patch—for agriculture or aquifer replenishment, for example—regulatory agencies have a lot of legwork ahead of them.

“We’re really just getting started, but I think New Mexico needs to be recognized for taking this on as an issue,” Lawrence said. “I think they’re mindful of what has happened in other states, in particular, Oklahoma—and I think they’re trying to avoid a problem, which is always a good thing.”

NM Political Report reached out to the three state agencies that signed the agreement, including the Energy, Minerals and Natural Resources Department, the Office of the State Engineer and the Environment Department.

But Michelle Hunter, chief of NMED’s Ground Water Quality Bureau, was happy to speak about the agreement—which she said came about thanks to EMNRD and EPA. “They deserve full credit,” she said, “and any water treated will fall under their regulatory authority unless it’s used for other purposes outside the oil patch.”

That’s not something that would happen anytime soon, she said. But industry’s reuse of their water, she said, could be a key to further economic development in the oil patch.

“We’re being very cautious, and we know we’re way down the road from [using recycled water] for other uses,” she said. “My biggest hope is we can protect the groundwater resources of the state by offsetting freshwater use.”

New Mexico is the best place to try this out, Hunter said, given the state’s water challenges.

New Mexico has been in the grip of severe drought for almost a year. Rivers are running lower than historic levels, and the Rio Grande has even dried this year south of Albuquerque.

There are legal issues related to water to consider as well, including Texas v. New Mexico and Colorado. If New Mexico loses its U.S. Supreme Court battle with Texas and the U.S. government over decades’ worth of compact violations on the Rio Grande, the state could end up owing not only damages but additional water to Texas.

Scientists have been warning for years that groundwater resources are not just vulnerable, but overtapped. Domestic wells are drying in New Mexico, and aquifer levels are dropping from Gallup to Hobbs. If the Ogallala in eastern New Mexico continues its current rate of decline, for example, it’s expected to dry near Clovis within 20 years.

“We’re pleased that EPA Region 6 and the State of New Mexico are exploring potential alternatives for managing oil and gas wastewater, but we urge the workgroup to proceed with great caution to make sure that its recommendations don’t create more problems than they solve,” said Leyden.

Someday, there could be a role for “properly permitted” releases of produced water into riverways, or perhaps to recharge aquifers. But treatment would have to be “robust,” he said, and discharge standards, strict.

“Treatment costs are significant and the science is incomplete for answering the question of how clean the water needs to be to avoid negative impacts to human health and the environment,” he said, adding there isn’t enough information about what is actually in produced water—in part because that can vary between regions and wells and companies.

Some of the chemicals used during fracking can include hydrochloric acid, petroleum distillates, ethanol, sodium chloride and trimethylbenzene.

“There aren’t water quality standards or even approved analytical methods for most of the chemicals we know are a concern in produced water,” he said.

In the future, millions of gallons of “new” water could be put back into the state’s water cycle. But it’s unclear how that water would be regulated, or who would administer the rights to it. Questions like those and others—such as who would be financially responsible for wastewater spills and how reused water would be used—will presumably be tackled by the working group, as it starts meeting this summer.