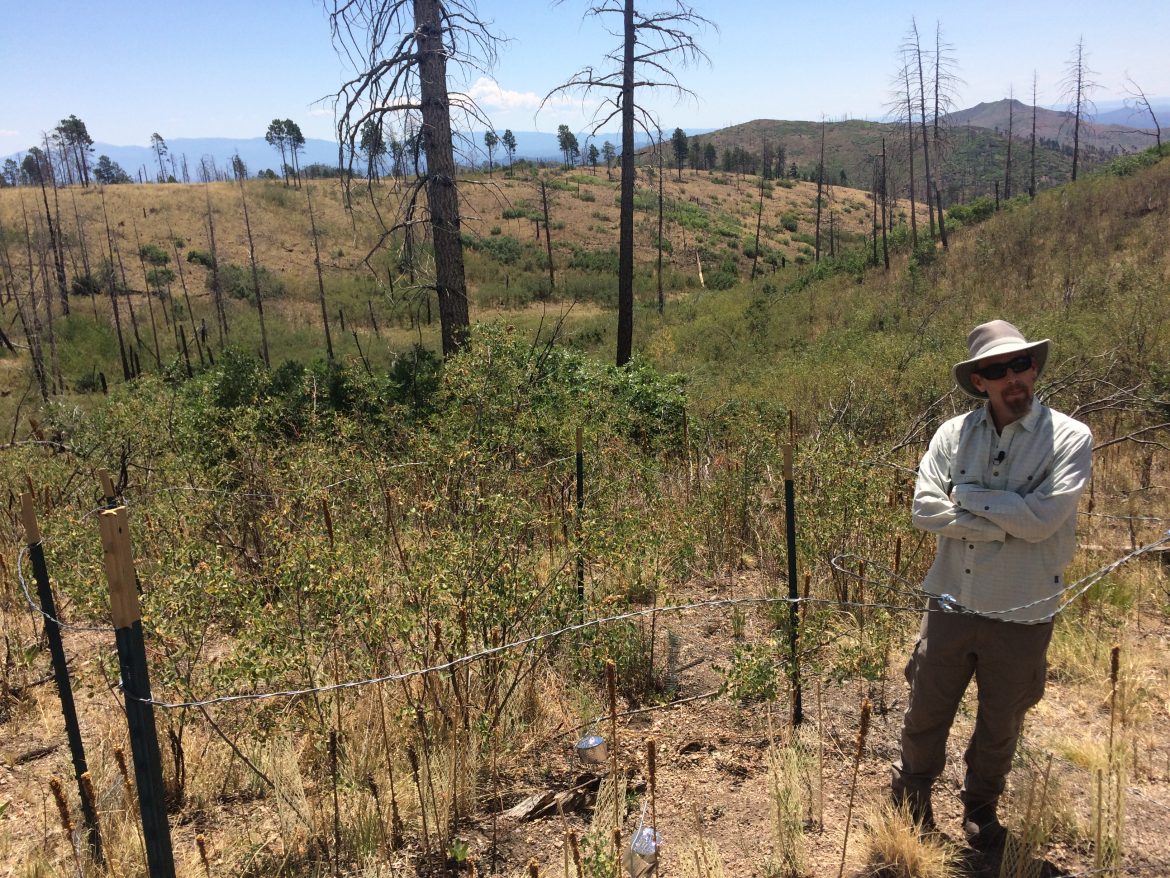 Matthew Hurteau spends a lot of time here on the eastern flank of the Jemez Mountains, checking on seedlings and dodging a sunburn. On a mid-July afternoon, rain drops from monsoon clouds in the valley south of us. But here, up above 7,000 feet, it’s sunny and hot.

Until recently, this craggy landscape was carpeted by a dense pine forest. But today, as we look across the thousands of acres where the 2011 Las Conchas fire burned at its hottest, we’re taking in a panoramic view of the Sangre de Cristos to the north and Cochiti Reservoir and the Sandia Mountains down the Rio Grande Valley.

All told, Las Conchas devoured 156,000 acres, about 30,000 of which will never be a pine forest again. At least not within a timespan involving you and me, our grandchildren or great-grandchildren.

“We’re doing the project to try and understand—if society decides that we want to invest the resources to reforest the system—how can we use those resources efficiently?” says Hurteau, a biology professor at the University of New Mexico.

As part of a three-year research project, Hurteau and his students in the Earth Systems Ecology Lab planted about 2,000 pine and Douglas fir seedlings in different microclimates within the burn scar, on north- and south-facing slopes, for example, and in open areas and beneath brush. By tracking which ones survive, Hurteau wants to help land managers and policymakers know what to do in the wake of other western wildfires, which are growing in size and intensity as the planet continues to warm.

Globally, temperatures have been rising for decades, affecting mountain snowpack, drying out soils and altering both the supply and demand of water. Since the 1980s, warming has also led to a longer wildfire season, and more big fires across the western United States.

To be sure, fires like Las Conchas—and the Whitewater-Baldy Fire in the Gila National Forest, which burned almost 300,000 acres in 2012—were exacerbated by overly-dense forest conditions due in part to 20th century fire suppression policies.

But the same warming trend that contributes to larger wildfires also makes it harder for some forests, including in the Jemez, to return once the flames are extinguished.

Scientists have been studying this for years. In 2010, a peer-reviewed paper showed how intense drought, insect outbreaks and wildfires slow tree growth and increase tree die-offs in southwestern forests. Another, in 2012 noted that if warming continues as predicted, southwestern forests will suffer changes “unfamiliar to modern civilization.” And a 2016 paper in “Nature Climate Change” projects that by 2100, pine-juniper forests in the Southwest will be gone—and more than half the northern hemisphere’s evergreen trees will have died due to warming and its associated stresses.

We see that happening here in this swath of the eastern Jemez, where pine forests couldn’t regenerate after Las Conchas. Too few mature pines survived to re-seed a new generation of trees. In some places aspens and New Mexico locusts are filling in the landscape. In other areas, scrubby oaks are spreading.

But once the tallest, oldest trees—the overstory, which provides shelter to seedlings—are gone, the environment becomes hotter and drier.

Hurteau crouches to readjust the netting that keeps elk from nibbling on the tiny Douglas fir and pine seedlings, and points out a nearby weather station that gathers information on temperature and humidity.

“You’ve got a lot more sunlight hitting the surface of the Earth and as a result, that creates a fairly hostile environment for a pine seedling to try and establish,” he says. “And even when the seeds do germinate, the chance they’ll grow to become a seedling, and then from a seedling to a sapling, is really miniscule.”

Las Conchas burn scar with Cochiti Reservoir in the background

Studying this transition—seeing which species persist here now, and understanding which can survive—will help people decide what to do next, says Hurteau: “We can use that information to better understand how we can more effectively plant seedlings after one of these large, hot fires to accelerate reforestation of these environments.”

What happens here in the watershed matters to everyone below: If you live in the Rio Grande Valley, your water comes from forested landscapes, like those here in the Jemez. Trees provide shade and help retain snowpack in the winter, he says, and canopy cover helps slow the rate of melting snow in the spring. That means decisions about the watershed affect everyone below, too.

And each year with above-average or average snowpack should be put to good use, he says. That’s because the climate projections for the Southwest show the region will keep getting warmer and drier.

“The warmer and drier it gets, the less likely we’re going to be able to establish seedlings in these areas,” he says. “Given the rate at which the climate is changing, if we want to establish trees on these landscapes, we need to take advantage of this relatively small window.”

This story was reported with New Mexico In Focus. To watch last Friday’s episode of “Our Land: New Mexico’s Environmental Past, Present and Future,” visit here. You can also learn more about the series at the New Mexico In Focus website and YouTube channel.