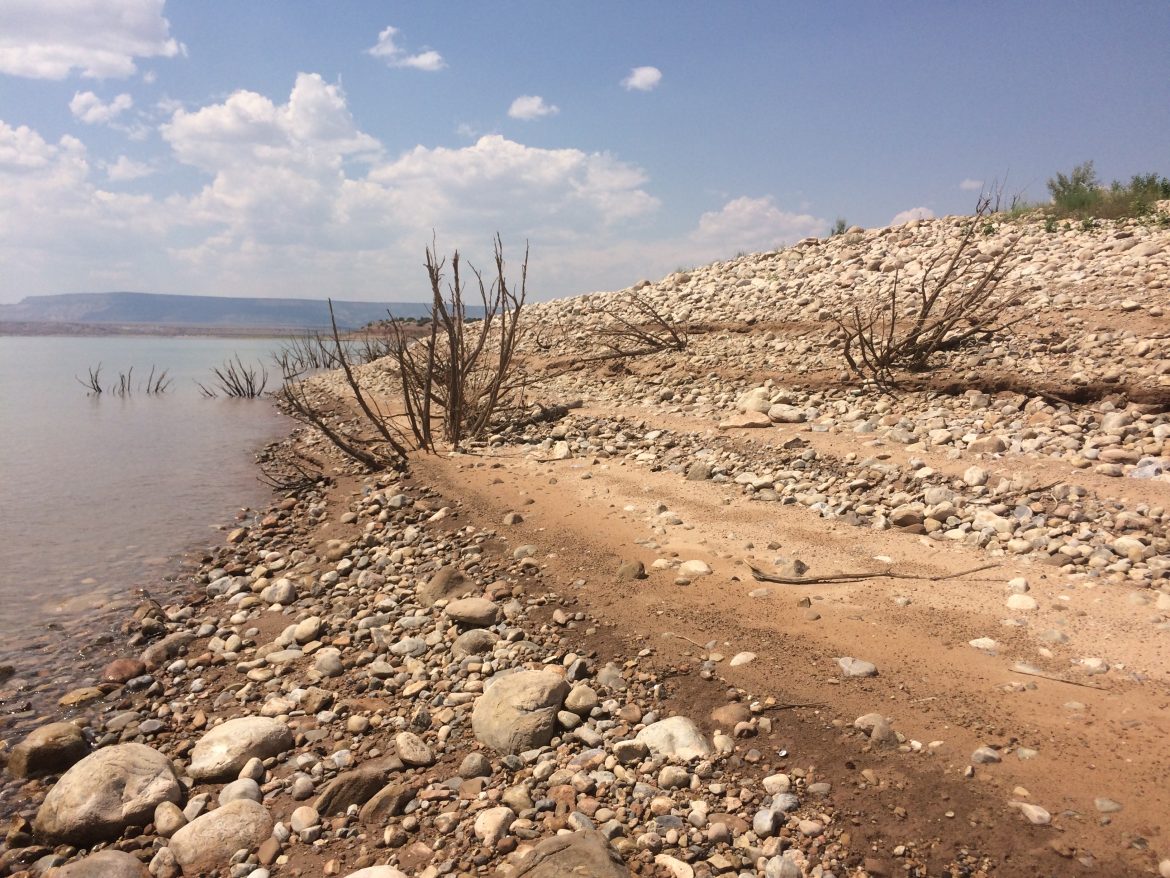 Reservoirs, including Abiquiu Lake, continue to drop in New Mexico

Irrigators in the Middle Rio Grande will be watching the skies for rain even more closely now.

At its board meeting this week, the Middle Rio Grande Conservancy District announced it could soon enter what are called “P&P Operations”—when it can only meet the irrigation needs of about 8,800 acres of pueblo lands, which have the most senior water rights in the valley.

The irrigation district had just under 21,000 acre feet of water in upstream storage as of Aug. 9 and estimated that water will be gone within two weeks.

Once that stored water is “exhausted,” deliveries to other irrigators will cease until conditions change.

According to the report presented at the meeting:

That may be very little, possibly even no water available at times. Or, there may be a lot of water, depending on rains. The current forecast gives hope for above normal precipitation in the late summer/early fall. But until the rain falls, we never know just how much it will be. It is likely to be intermittent, with possibly no water available for extended periods of time.

A new drought monitor will be released Thursday, but as of last week’s map, nearly 70 percent of New Mexico was experiencing severe to exceptional drought conditions. Almost all of the state’s major reservoirs have dropped drastically this year, due to poor snow conditions over the winter. Elephant Butte Reservoir, for example, currently holds only about 109,000 acre feet of water, and is at just 5.5 percent of capacity. The Rio Grande experiences brief bumps in flows due to monsoon storms, but appears to have dried again last week south of Albuquerque.

If you’re not sure how Prior & Paramount operations work, that refers to water for the six Middle Rio Grande Pueblos, including Kewa, Cochiti, San Felipe, Santa Ana, Sandia and Isleta. Because the pueblos were here long before any of the valley’s other inhabitants, when Congress passed an act in 1928, supporting creation of the Middle Rio Grande Conservancy District, it noted that the water rights to those pueblo lands are “prior and paramount to any rights of the district.”

As the MRGCD report noted, the pueblos have worked with the irrigation district and federal water officials this year, managing P&P waters to “support regular irrigation as long as possible, for the benefit of all irrigators.”