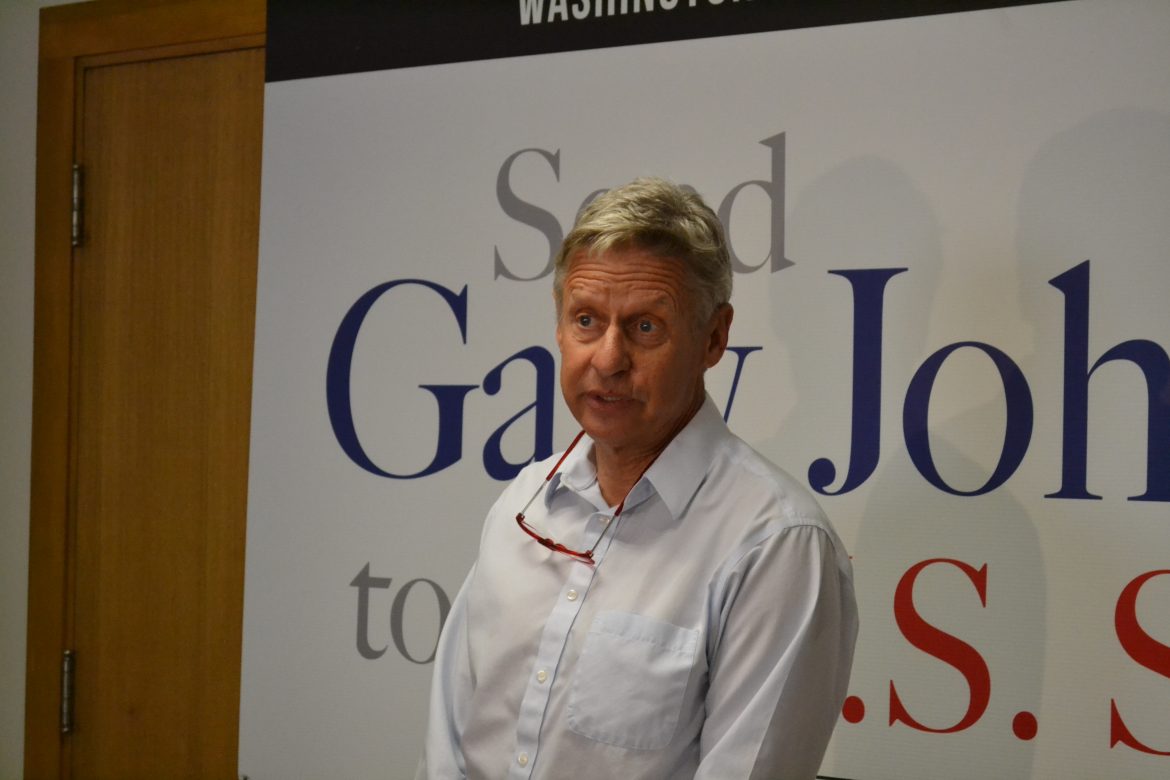 Gary Johnson is mad as hell and he’s not going to take it anymore.

At least that seems to be the message from the former two-term Republican governor, two-time Libertarian presidential candidate and now Libertarian U.S. Senate candidate in New Mexico.

“I am angry at the two-party system, I think we’ve all been hoodwinked to believe these are our only choices,” Johnson said at a press conference on Thursday.

The press conference was the first time Johnson spoke publicly as a U.S. Senate candidate since the Libertarian Party of New Mexico nominated him earlier this month. The party filed paperwork to formally nominate Johnson earlier this week.

Johnson emphatically told a group of reporters how he would focus on free trade (he is against President Donald Trump’s tariffs), immigration (which he thinks Republicans are too negatively focused on) and privatizing the duties of the federal government.

“There’s a private solution to everything,” he said.

Conflicting internal polls aren’t clear on Johnson’s chances of winning, and no public poll has been released, but he seems to have put new energy in a race that seemed destined to end in an easy win for Democratic incumbent U.S. Sen. Martin Heinrich.

In an old office building in downtown Albuquerque, about a block away from Heinrich’s local Senate office, Johnson faced a row of television cameras and said he has never run a negative political ad and doesn’t plan to.

During his 30-minute-long press conference, he stuck to the pledge even when asked about his opponents.

He expressed empathy for his Republican opponent, political newcomer and construction company owner Mick Rich. And he distanced himself from calls from his supporters for Rich to drop out of the race.

“It’s certainly his decision [to stay in the race] and I think, personally, I’ve put him in a horrible situation,” Johnson said. “He’s been campaigning for a year and a half and I don’t want to say this is pulling the rug out from under him, but I would be angry if I were him.”

Johnson called Heinrich a “nice guy,” but criticised him for being a “placeholder” in the Senate.

Johnson separated himself from either candidate, with an often-heard mantra of Libertarians.

An early proponent of legalizing recreational marijuana, Johnson hasn’t shied away from talking about his own marijuana use. In 2016 Johnson said he refrained from consuming marijuana during his presidential campaign. Now though, he said he “occasionally” uses it, but compared it to people drinking a “cocktail” before bed.

“I may be in that category with marijuana,” Johnson said, adding that speaking freely about his “occasional” marijuana shows he’s honest.

But most Democrats would disagree with Johnson’s take on a controversial, proposed U.S. Supreme Court justice replacement.

“If I were to vote up or down on that nominee and that was my choice, I would vote up on that choice,” Johnson said, explaining that he likes Kavanaugh’s originalist view of the U.S. Constitution.

“It is a constitutional choice and [Kavanaugh] would fall in the bounds of ‘This is a guy who will follow the Constitution.’”

Of course, it may be too soon to plan on a Johnson win.

As of the last campaign finance reports, Heinrich had almost $4 million in cash on hand and Rich had about $200,000. Johnson had under $2,000 left over from his 2016 campaign. Even with the support of a recent PAC, created by his former campaign manager, Johnson admits he has some catching up to do.

“I’m the underdog,” Johnson said. “This is a longshot, let’s be honest about it, it is a longshot and it’s dependent on fundraising. It’s not about out-raising your opponent but being on parity.”

Johnson’s name recognition in New Mexico is much better than on the national stage but that could hurt him if he’s trying to woo Democratic voters.

Johnson doesn’t seem ready to apologize for his historical budget cuts and record number of vetoes as Governor, but he did say some of his views have evolved since he was governor.

Correction: This story originally said Martin Heinrich had almost $3 million cash on hand as of the last campaign finance reports. It is actually almost $4 million.