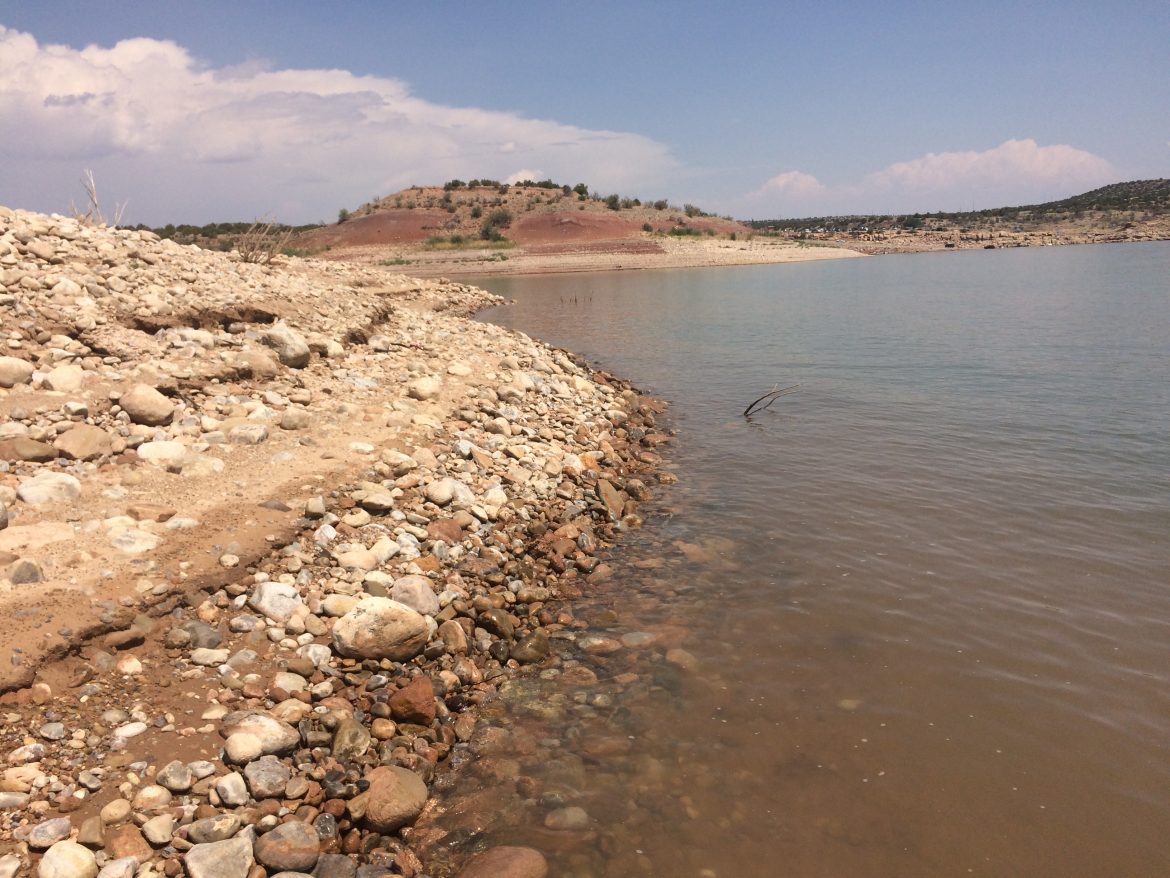 Reservoir levels continue to drop, including on Abiquiu Lake (pictured here) and its upstream neighbor on the Chama River, El Vado.

For almost a year, drought conditions have gripped New Mexico, dropping lake levels and drying out riverbeds and rangelands alike. Even this summer’s monsoon rains haven’t been enough to alleviate drought conditions or bump up reservoir levels. And while El Niño conditions brew in the Pacific—foretelling wetter conditions for the Southwest later this year—right now, the state’s water situation is dire.

The Middle Rio Grande Conservancy District is now notifying farmers that the water it had stored is almost depleted, months before irrigation season’s typical end around Halloween. They can’t predict exactly when the water they have stored in El Vado Lake, on the Chama River in northern New Mexico, will run out. But they anticipate it will happen sometime late next week.

MRGCD officials say that doesn’t mean they won’t make any more water deliveries this season. Rather, since they’ll be relying on natural flows in the Rio Grande, they say they can’t regulate the river to meet scheduled demands or guarantee the availability of water.

Earlier this week, the district had already announced it anticipated entering Prior and Paramount Operations—when it can only meet the irrigation needs of about 8,800 acres of pueblo lands, which have the most senior water rights in the valley.

That includes the pueblos of Kewa, Cochiti, San Felipe, Santa Ana, Sandia and Isleta. Because the pueblos were here long before any of the valley’s other communities, when Congress passed an act in 1928 supporting the irrigation district’s creation, it noted that the water rights to those pueblo lands are “prior and paramount to any rights of the district.”

The pueblos have worked with the irrigation district and federal water officials this year, according to MRGCD, managing Prior and Paramount waters to “support regular irrigation as long as possible, for the benefit of all irrigators.”

No quick end to Article VII

Poor snowpack and low runoff has also forced other water users on the Rio Grande to exhaust their supplies. As of Thursday, for example, Elephant Butte Reservoir is at just 5.5 percent of its capacity, holding just over 107,000 acre feet of water.

In May, New Mexico entered into Article VII restrictions when combined storage in Elephant Butte and Caballo reservoirs dropped below 400,000 acre feet. Under Article VII of the Rio Grande Compact, that means Colorado and New Mexico can’t store water in any upstream reservoirs built after 1929—including El Vado.

“We will anxiously watch the snowpack this winter in hopes that it will provide some relief for the next year,” said U.S. Bureau of Reclamation spokeswoman Mary Carlson. “If we exit Article VII restrictions at all next year, it likely won’t be until June at the earliest.”

She added that means storage in El Vado will be limited to Prior and Paramount water for pueblo lands and then relinquishment credit water for MRGCD until the combined storage in Elephant Butte and Caballo rises above 400,000 acre feet.

That will be a long climb, she said. Projections currently show Elephant Butte and Caballo will have about 75,000 acre feet at the end of this season.

“Of course we will gladly anticipate any forecast that calls for above average precipitation,” she said. “We will hope for the best, but manage our supplies cautiously as we are aware that forecasted precipitation, especially with above average temperatures, doesn’t always provide as much benefit as we’d like.”

Meanwhile, New Mexico is also facing off against Texas and the U.S. government in the U.S. Supreme Court over the waters of the Rio Grande.

In 2013, Texas sued the upstream states of New Mexico and Colorado, alleging that by allowing farmers in southern New Mexico to pump from groundwater wells near the Rio Grande, New Mexico has failed for decades to send its legal share of water downstream. The high court has already rejected New Mexico’s request to have the case dismissed.

During the monthly National Oceanic and Atmospheric Administration climate briefing on Thursday, climate and weather experts noted El Niño conditions have a 70 percent chance of developing in the fall, and they forecasted wetter-than-normal conditions in the southwestern United States for November, December and January.

“We’re more likely to have El Niño than not,” said Dan Collins, meteorologist and seasonal forecaster at NOAA’s Climate Prediction Center. But, he added, the predicted El Niño doesn’t look to be a strong one.

By tracking temperatures in the Pacific Ocean, scientists attempt to forecast what will happen across land surfaces. Typically, during El Niño conditions, the track of winter storms coming off the Pacific moves southward. For the swath of land from southern California eastward across the southern part of the U.S. to Florida, El Niño conditions can mean more winter storms. That is, it sets up the conditions for wetter weather but doesn’t guarantee them.

During Thursday’s climate briefing, Jake Crouch, a climate scientist with NOAA, pointed out that the contiguous United States had its 11th-warmest July on record—and there were record warm temperatures across much of the West, including in New Mexico.

The first seven months of the year were also warmer than normal. For the 25th consecutive year, Crouch said, January-to-July temperatures nationwide exceeded the 20th century mean. And New Mexico and Arizona experienced their warmest years to date in 124 years of record-keeping.

That warming trend will likely continue across the West through the fall, particularly in the Four Corners states.

“What El Niño tends to bring us is actually somewhat cooler temperatures, and so when we see a forecast of warmer-than-normal temperatures, that mostly reflects warming trends,” said David Gutzler, a climate scientist and professor in the Department of Earth and Planetary Sciences at the University of New Mexico. “But this year, that forecast is tempered somewhat by El Niño.”

Even as the climate continues its warming trend, there will be natural variability in weather patterns from year to year—swings between wet years and dry years. That’s different from changes in the climate, which relate to long-term averages.

NOAA also forecasted an improvement through the fall and winter in drought conditions across the Four Corners, including New Mexico and Arizona.

Gutzler said it’s worth being cautious about that, since drought outlooks are based on local precipitation and don’t take into account things like reservoir storage, which relies upon snowpack.

“I’ll be an optimist and say, [based on what we know] historically, if El Niño develops as projected and persists through the winter, the odds get shifted somewhat toward good snowpack conditions,” he said. But another important question for water managers—and users—is what happens at the end of winter and in early spring.

Warm winters, and early springs mean that snowpack melts too early and too quickly.

“I don’t think one wet winter solves all of our long-term water challenges, but I don’t want to dismiss how great it would be to get a really healthy snowpack,” he said. “We will root for a wet winter—I will, anyway.”