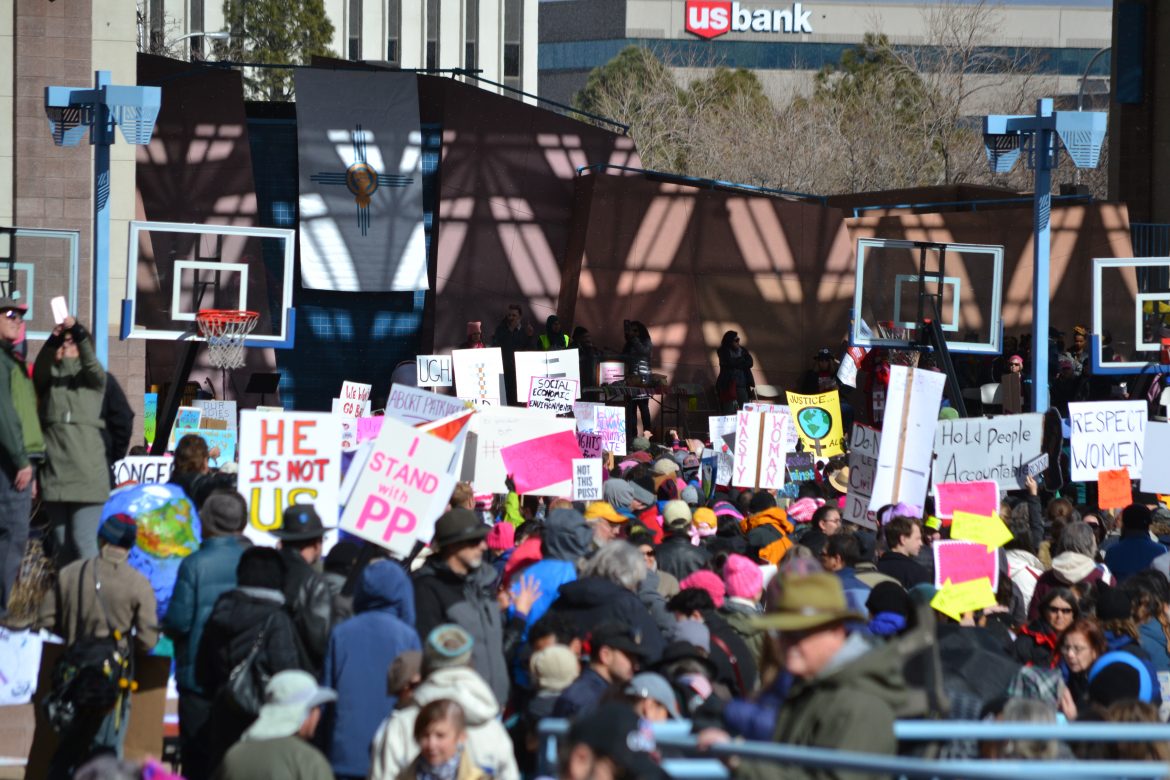 Crowd at the Albuquerque Women's March in January, 2017.

As a reporter, I’m used to politely hounding politicians for answers. Some politicians are more tight-lipped than others, and it’s my job to ply them for information. That job not surprisingly gets more difficult during action-packed election seasons.

Still, I find myself bewildered that of all New Mexico’s major-party candidates running for both chambers of U.S. Congress, many didn’t respond or turned down my requests to ask questions about some of the many issues that affect New Mexico women and families.

Of the 15 candidates I approached repeatedly, nine agreed to take about 20 minutes to talk about where they stand* (Ed.: see note at the end of the story) when it comes to access to contraception and abortion, the needs and concerns of LGBTQ community members, changes to the Affordable Care Act, violence against women, among other topics.

That leaves a concerning number of people vying for some of our highest local offices who opted not to answer questions from that could better inform potential voters. This is during the run-up to what may be one of the most pivotal midterm elections of our lifetimes.

I don’t feel I was naive when I assumed topics that carry extra weight for women, LGBTQ people, and their families would have relevance this election season. More women than men voted in the 2016 elections, and there are record numbers of women candidates this year. This midterm season comes not long after the 2017 Women’s March galvanized the largest protest in national history, soon after the #MeToo and #TimesUp movements drew counteractive attention to sexual abuse and harassment in workplaces. With President Donald Trump’s appointment of Judge Brett Kavanaugh to replace retired Supreme Court Justice Anthony Kennedy, our local and national legal landscape may be on the verge of fundamental shifts, particularly when it comes to legal access to abortion and other family planning resources.

Those weren’t the only factors that made me optimistic candidates would be eager to talk. A vast majority, about 80 percent, of family healthcare decisions in this country are made by women. Of the hundreds of thousands of women in the U.S. who opt to get an abortion every year, a majority are already mothers, many struggling against poverty or fearful of slipping into poverty. Abortion opponents have successfully leveraged that single issue as a way of turning out the vote for years. We’re in the midst of major news about rising rates of maternal mortality and incarcerated women. And New Mexicans have long faced a backlog in rape kit testing; untenable rates of domestic abuse, intimate partner violence and homicide; poorly tracked incidences of missing and murdered indigenous women; disproportionate rates of discrimination, violence and inadequate health treatment directed to people who identify as LGBTQ.

These issues impact all New Mexicans, regardless of gender or political party, no matter if they live in a rural or urban area, whether they’re single or married, young or elderly.

When I’m covering political races, my role is to act as an informative intermediary between the public and people competing for public office. Q&A-style interviews—in which opposing candidates are asked the same questions, with their responses published in transcript form—present a vital opportunity for voters to get to know candidates in their own words, in detail. For the purposes of this series, I tried to craft questions other media outlets and debate moderators might not ask.

I was hopeful New Mexico candidates would overall be eager and prepared to talk about their plans to address these issues. That such a significant number either declined to do so or did not respond to my requests in any way is alarming. I can only imagine how exhausting, stressful and time-consuming it is to run for public office, but if I’m hitting brick walls as a reporter for the most widely read online news platform in the state, I can’t help but wonder what constituents are up against. If a politician is press-shy while they’re trying to win over support from prospective voters, chances are not great that they’ll be more forthcoming and transparent once elected.

The bipartisan radio silence raises other questions. Do issues like the ones I’ve highlighted make the candidates uncomfortable, or are they simply not on their radar? Are their calendars jam-packed because they’re under pressure to prioritize private interests and fundraisers over time communicating with the public? How committed are these prospective representatives to inspiring participation of every community member in our democratic processes?

New Mexicans who have their own outstanding questions should feel fully empowered to address politicians, to press them for clear answers before they ask for your vote. I remain hopeful they’ll talk to you.

Note: Freelance reporter Margaret Wright contacted Michelle Lujan Grisham’s gubernatorial campaign on six occasions over the course of two months to request an interview. During this time, the campaign changed communications personnel, and the reporter was not directed to the new communications director by her editor. In our stated interest of keeping the public informed about candidates’ positions on these issues, we’re allowing both the campaigns of Lujan Grisham and Steve Pearce another chance to speak on these issues in the next day.