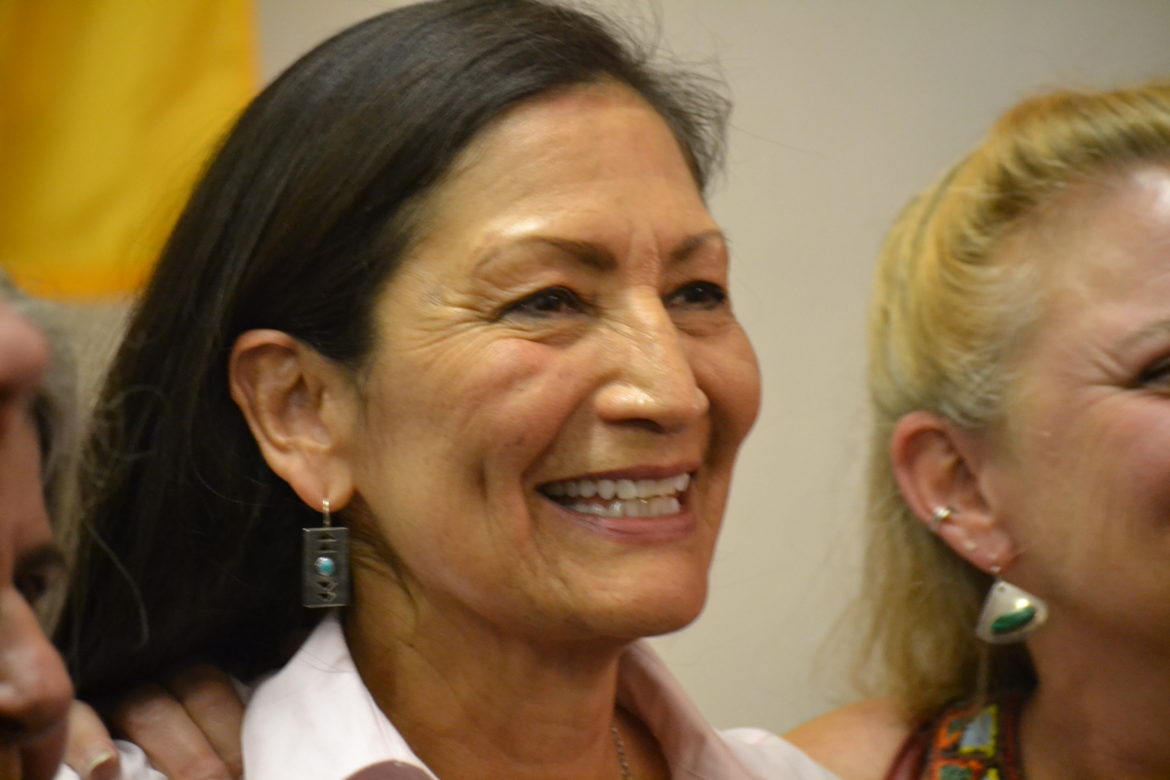 For links to all of our stories, see here.

The following is from a Q&A with Deb Haaland, the Democratic nominee in the 1st Congressional District.

NMPR: If elected, how will your beliefs about the separation between government and religion guide your work in Congress?

Deb Haaland: I have to think of my constituents first. … If I get elected, they want a representative who has had experiences like I’ve had. They’ll trust me to make my decisions based on those experiences, and so I have to really remember that overall, yes, I may be drawing from my background in the decisions that I make. But ultimately I’m working on behalf of my constituents. I can’t let my personal beliefs take over.

NMPR: Is healthcare a human right? Why or why not?

Deb Haaland: Yes, is is a human right, absolutely. The healthcare you receive in this country shouldn’t be based at all on whether you can truly afford it or not. We need healthcare that works, because we owe it to our society to have a healthy society. Every individual deserves to see a doctor when they’re sick, they deserve to have access to affordable and accessible healthcare. It should never be reserved for somebody who has money as opposed to somebody who doesn’t. That’s why on our campaign, we’ve worked really hard to talk about Medicare-for-all, universal healthcare, … that it ensures every individual has affordable and accessible healthcare, … including Planned Parenthood.

NMPR: If elected, can you describe what measures you would take, if any, to ensure that contraception is easily accessible to anyone who needs it?

Deb Haaland: I am in favor of making sure that Planned Parenthood has funding, because I think that it is an accessible place where women like me—and there are thousands of others out there—can access healthcare. One component of their organization is family planning. That means you can get contraception there, which makes it accessible.

NMPR: What measures would you take, if any, to ensure that abortion is legal, safe and accessible?

Deb Haaland: Abortion is legal in this country. … If I were in the U.S. Senate, I would do everything to stall the vote, to not confirm Judge Kavanaugh. That’s a worry right now for women, this worry that the Supreme Court could overturn Roe v. Wade. I’ll do everything I can to message on that.

There are a lot of women who have fought long and hard, and that’s an example of where you wouldn’t allow your religion to interfere with government. … Abortion is legal in this country, and just because anyone might be against it for religious reasons does not mean you should put that onto the majority of women.

NMPR: Please describe how an LGBTQ person in your life has affected your worldview.

Deb Haaland: That would be my daughter, who is a lesbian. Sometimes I think about how I have this beautiful, wonderful lesbian daughter who I adore, and who I want to have every opportunity for success. But quite frankly, I would feel that way about any member of the LGBTQ community, because I just feel that every single American, regardless of where they are, what community they belong to, deserves to have opportunities to succeed.

I took a tour one time of the Transgender Resource Center of New Mexico, and it’s a shame that a lot of members of the LGBTQ community have found it very difficult to find housing, find employment. That’s a community that really needs all of us to step up and treat them with respect, dignity and equality. That’s something I would really like to change in our society.

NMPR: What are your priorities when it comes to addressing needs and concerns of LGBTQ people, including those in rural and tribal communities?

Deb Haaland: A lot of times it might boil down to understanding. … For me, I have a lesbian daughter who would be everywhere I go, I talk to her every day on the telephone if I don’t see her in person. I think some people don’t have the breadth of understanding that they should when it comes to the struggles of members of the LGBTQ community.

It’s up to people like me, up to people who do understand that community, to make sure we’re finding ways to bridge those gaps so that we can have a more accepting society.

NMPR: What is your stance regarding proposals to enact federal work requirements for SNAP, subsidized housing and other public assistance programs?

Deb Haaland: I’m generally against any of that if it’s not federally mandated. A lot of people who are applying to safety-net programs here in New Mexico are from rural communities where jobs are very hard to come by. So is public transportation. I’m against [work requirements] pretty much all the way, simply because we have a third of our children going to bed hungry every night in New Mexico. If they need food, those programs need to be there to provide them with food.

NMPR: What is your stance regarding the Republican tax bill that includes major cuts to food assistance and a provision to repeal the Affordable Care Act’s individual mandate, a key part of the ACA, that will go into effect with the tax bill next year?

Deb Haaland: I am absolutely against that. … The Affordable Care Act has assisted millions of people in its implementation. The Republicans’ mentality is always that people need to pull themselves up by their bootstraps. That is not the reality for so many people.

… There’s no reason on earth we should be giving the richest one-percent tax breaks as the pay inequity gap gets wider and wider and people are finding it harder and harder just to pay their rent every month.

… We need to raise the minimum wage. We need to help move toward debt-free college so that students aren’t saddled with huge student loans when they graduate, and give people an opportunity to succeed.

NMPR: What is your agenda for helping combat our state’s and our nation’s high prevalence of substance abuse disorders?

Deb Haaland: We, first of all, need to quit giving all the rich folks tax breaks and put more funding toward our behavioral health systems. That is something that should happen immediately.

Additionally, whenever we have people who are getting busted for small amounts of pot and they go to court, we shouldn’t be throwing people in jail for those things initially. For any addiction related criminal issues, we should make sure those folks have opportunities at rehabilitation. That means giving more funding for things like drug court, so people have an opportunity to better their lives.

Addiction is a tricky and often misunderstood fact of our society, and just because you’ve jailed someone who has addiction does not mean that addiction goes away. … You have to help them to change their lives.

NMPR: If elected, what will you do to address the high numbers of families affected by incarceration, including rising numbers of women?

Deb Haaland: We need to legalize cannabis, for one thing. People shouldn’t be going to jail or prison for small amounts of pot. I think that would make a huge difference in the numbers of people who go to jail and prison every year.

Under President [Barack] Obama’s administration, they lowered and were trying to phase out the number of private prisons throughout the country. I am so in favor of that. There should not be any financial incentive to incarcerate Americans in any prison, that is a governmental function.

As I said, drug courts additionally would give folks an opportunity to change their lives for the better, to become sober.  We need to spend more money on behavioral health systems and treat addiction as a public health issue, not a criminal issue.

NMPR: How will you take action regarding the federal government’s detention of asylees and immigrant families, including families with children?

Deb Haaland: Of course I am wholeheartedly opposed to the separation of families on our southern border. There are laws with respect to asylees and refugees.

I am against any racist immigration policies that treat asylees and refugees like criminals the second they cross the border. … If they’re crossing the border without documentation, that’s a civil infraction, not a criminal one. We need to make sure we’re following the law.

A lot of those folks—they’re hard-working people fleeing violence and oppression in their home countries. They shouldn’t come here and be treated the same way.

NMPR: What are your top priorities for improving safety and support services for survivors of sex offenses?

Deb Haaland: I’ve already mentioned my wholehearted support for improving funding for our behavioral health systems, and I think that’s definitely necessary. We need to help anyone who has survived that to become whole again, essentially.

Perpetrators must be held accountable. We have to be sure we’re spending more on law enforcement in that respect. We’ve talked a great deal in our campaign about missing and murdered indigenous women, for example. Those women suffer exponentially more, simply because the law enforcement agencies lack the ability to communicate and share data and things like that. I think we need to spend more money on ensuring our law enforcement communities can communicate with one another and share data they need, to work together to make sure they can solve these crimes and help survivors to be whole again, as I said. It’s a whole process, and sometimes people need to know that someone’s being held accountable.

NMPR: What are your top priorities for improving safety and support services for survivors of domestic violence?

Deb Haaland: … One thing I’ve talked a great deal about in my campaign is returning to community policing, having a community model where you know your neighbors … and people are part of their community alongside law enforcement agencies. I think that’s part of it.

NMPR: Is there anything you wish I’d asked about issues that affect New Mexico women and families?

Deb Haaland: Part of why I’m running for Congress is I feel strongly that I’ve had struggles like a lot of women and families in New Mexico. I just think it’s important for elected folks to understand the needs of the community, and I feel confident I can represent people in District 1.

All of this week’s candidate Q&A’s were edited for clarity and length, although we did not edit the meaning of candidates’ answers. We did not include, however, tangents or off-topic issues candidates raised during the course of the conversations. It’s also important to note that the candidate’s answers aren’t annotated and we don’t point out any possible inaccuracies or misstatements.