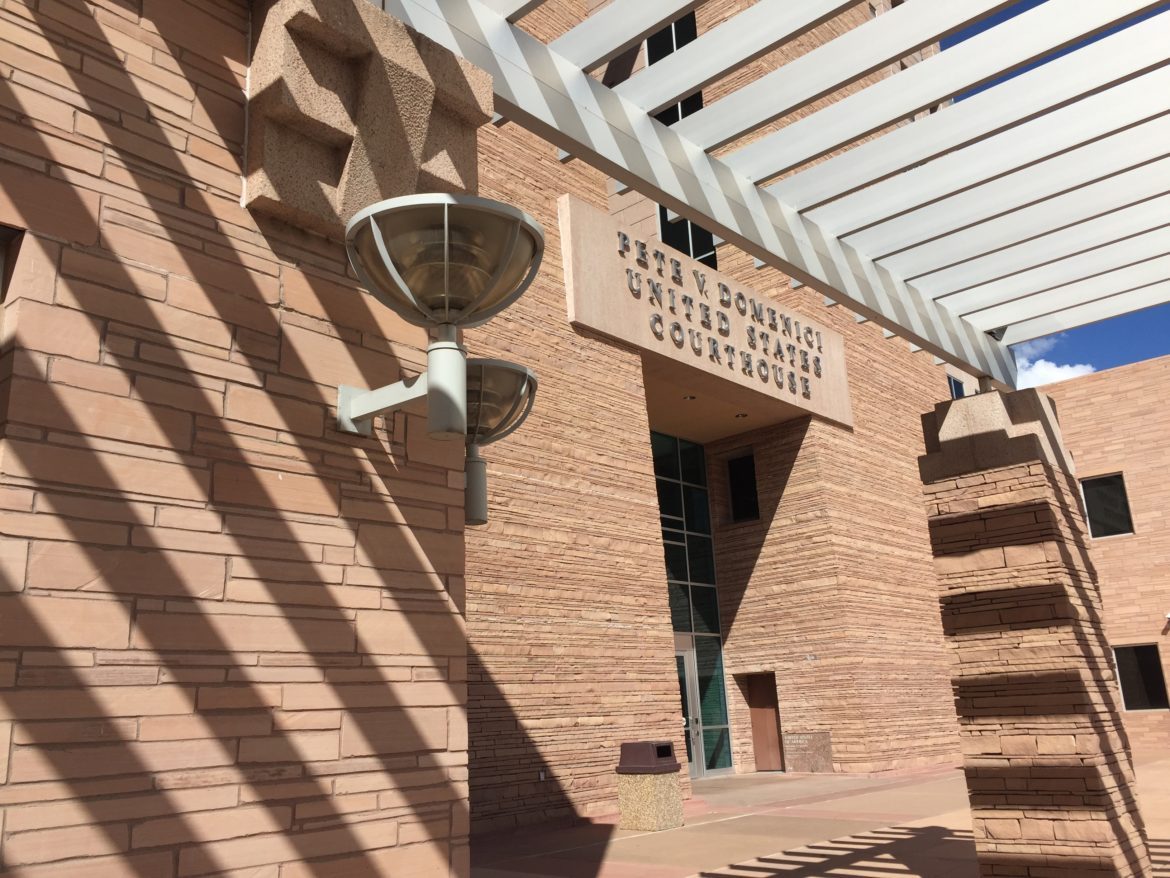 Prosecutors and defense lawyers have shielded records from public view without a judge’s order in New Mexico’s federal courts, an apparent violation of the U.S. District Court of New Mexico’s own rules, New Mexico In Depth has learned.

Judges, not lawyers, are supposed to decide which documents are made available to the public and which should remain secret through an established protocol based in part on decades of case law: Attorneys must submit a written request asking a judge to seal records and a judge must consent before records are sealed.

Despite this well-known standard, in numerous instances spread among three criminal cases, the New Mexico offices of the U.S. Attorney and the Federal Public Defender have decided unilaterally to make documents secret without a judge’s order, according to a review of federal court records by NMID.

It is not clear how many of the thousands of federal court records each year have been sealed this way, but one federal public defender says the practice has gone on for years.

“There has been a long-standing practice in the District of New Mexico for parties to elect to file a document under seal, without prior approval of the district court,” attorney John Robbenhaar wrote in an emailed response to questions from NMID.

The revelation has one leading government transparency advocate urging the federal courts to “strongly consider changing its practices,” especially in criminal cases where defendants’ freedom is almost always at stake.

“It’s the judge who should be making the decision about what is sealed and what is open to the public, because a judge is impartial in the case,” said Greg Williams, former board president of the New Mexico Foundation for Open Government.

Prosecutors and defense lawyers “have a particular interest that they’re trying to protect, and it isn’t their job to protect the public’s interests,” Williams said. “That’s why it’s of the utmost importance that a judge be required to authorize any sealing before it’s done.”

The federal courts should adopt the standard used in New Mexico’s state courts, where “a much more rigorous requirement for sealing” prevails, he said.

“The judge is not permitted to seal until he or she has satisfied themselves that there are no alternatives to sealing and has limited the sealing to what is absolutely required,” Williams said.

In addition to running afoul of defendants’ constitutional right to a public trial, Williams points out that secrecy breeds mistrust in government institutions including the courts, law enforcement, prosecutors and the Public Defender’s Office.

Mitchell Elfers, acting clerk for the U.S. District Court of New Mexico, did not respond to NMID’s questions about the allegation that it is a longstanding practice in federal court for attorneys to seal records without judicial consent. Nor did he address questions about judicial oversight of how records generally get sealed here.

He did write in an email, however, that: “The onus is on all participants,” including judges, “to adhere to” federal and local rules that spell out the process for sealing records.

The sealing practice came to light in a case NMID has followed since early 2017. It arose from a controversial 2016 sting in Albuquerque by the federal Bureau of Alcohol, Tobacco, Firearms and Explosives (ATF). The operation generated 103 arrests, including a disproportionate number of black people, on mostly low-level drug charges and, in some cases, firearms offenses.

Lonnie Jackson was one of 28 black people swept up in the undercover sting, a group that wound up behind bars in far greater numbers than those of other races when compared to the city’s population.

Jackson claims he was targeted because of his race. Two others, Yusef Casanova and Diamond Coleman, have made similar claims. Their cases appear to include improperly sealed records, too.

Robbenhaar, Jackson’s lawyer, has built a case to dismiss Jackson’s methamphetamine distribution charge. Because of a drug trafficking conviction in the 1990s, Jackson faces decades in federal prison if he’s convicted, even though he is charged in the current case with arranging the sale of a relatively small quantity of meth by federal standards.

Through the course of litigation in Jackson’s case, at least 11 documents — about 10 percent of the records in the case docket — have been filed under seal without a judge’s order, mostly by prosecutors with the U.S. Attorney’s Office, court records show.

Those documents are sealed in their entirety, which federal case law says is nearly always overly secretive. Officials should black out portions of documents that are appropriately shielded, and make the rest of those filings public.

On July 24, Robbenhaar filed a motion to unseal the entire record in the case, writing that all the secrecy has violated Jackson’s Sixth Amendment right to a public trial.

Neither he nor Assistant U.S. Attorneys Norman Cairns and David Walsh asked a judge to seal any of the documents that remain secret, he noted — actions that appear to violate a court rule that requires both an attorney’s request in the form of a motion and a judge’s order granting the motion to seal a record. In the criminal justice system, judges “grant” motions.

The local federal court rule makes no mention of exceptions that allow lawyers to file records under seal without a judge’s consent.

Elfers, the court clerk, said the judge in the Jackson case will consider Robbenhaar’s motion and rule on whether to unseal the records.

Robbenhaar attached to his motion a 2010 publication from the Federal Judicial Center entitled “Sealing Court Records and Proceedings: A Pocket Guide.” Created by Congress in 1967 to, among other tasks, “conduct research and study of the operation of the courts of the United States,” the center’s governing board is chaired by the chief justice of the U.S. Supreme Court.

Citing scores of circuit court and Supreme Court cases spanning decades, the pocket guide is a sort of best practices document. It lays out a seven-point “procedural checklist” for sealing documents in federal courts:

-Absent authorization by statute or rule, permission to seal must be given by a judicial officer.

-Motions to seal should be publicly docketed.

-Members of the news media and the public must be afforded an opportunity to be heard on motions to seal.

-There should be a public record of permissions to seal.

-Sealing should be no more extensive than necessary.

-The record of what is sealed and why should be complete for appellate review.

-Records should be unsealed when the need for sealing expires.

None of those criteria was met in the sealing of records in Jackson’s case, Robbenhaar contends in his motion.

Weeks later prosecutors responded to the motion — under seal, and without the permission of Chief U.S. District Judge William P. “Chip” Johnson, who is presiding over Jackson’s case. The secrecy of the response makes it impossible for NMID or the public to analyze the government’s reasoning for sealing so many documents in the case.

More broadly, it does not allow the public a chance to read the government’s argument for why the huge racial disparities among those arrested in the ATF sting do not amount to illegal racial profiling.

The U.S. Attorney’s Office did not respond to a request for comment on this story.

In Robbenhaar’s reply to the secret filing from the U.S. Attorney’s Office, the longtime public defender said prosecutors’ rationale for secrecy wasn’t persuasive and added that journalists and the public have an interest in the case.

Robbenhaar’s publicly filed reply offers a glimpse into at least some of the prosecutors’ purported reasons for secrecy. Among them: Prosecutors claim that unsealing their responses would jeopardize sensitive law enforcement techniques, including the use of paid confidential informants in the sting.

Robbenhaar rejects that notion and says federal officials already have waived any claim to secrecy by discussing the sting’s design with the Albuquerque Journal for a 2016 front page article trumpeting the ATF operation’s successes. He attached the article to his reply.

NMID also has reported extensively on the use of informants in the operation.

Beginning in May 2017, NMID has published more than a dozen stories on the ATF operation and its aftermath. The stories stoked outrage and calls for change from black community leaders and others in Albuquerque.

Robbenhaar argues that “the government’s hyper-sensitivity is not a proper ground for sealing a court document.” Citing a previous federal appeals court opinion, he notes that “Mr. Jackson is sympathetic to how the ATF’s questionable conduct during the (ATF operation) would be embarrassing to the government, but all the same, sealing of judicial records is not considered appropriate if it is done merely to protect parties from embarrassment.”

“The public’s right of access to the government is exceedingly important, and that’s no less true of judicial proceedings than any other aspect of government,” Williams said. “The public has a particular interest in knowing how criminal proceedings are conducted. The public and the media act as a watchdog on the process and any time you limit access to the judicial process in criminal cases, then the process itself suffers.”

Williams and the Foundation for Open Government have successfully battled for a more transparent legal process in New Mexico’s state courts.

“It’s absolutely in everyone’s interest to have an open process: it protects the court from accusations of bias or wrongdoing, it protects law enforcement, it protects the defendants and anyone else who has any involvement,” he said

Williams said he doesn’t know whether the sealing practice in New Mexico is in a minority among federal districts, “but I would say that the trend is going toward more transparency.”

He was not aware of the sealing practice in New Mexico’s U.S. District Court until NMID brought it to his attention.

“I think that the public and even many lawyers were not aware that you could seal merely by checking a box when you file without permission from the court,” Williams said. “It’s a bit of an outdated practice, and many other federal district courts have changed their process to ensure greater transparency.”

Correction: This story originally reported that Lonnie Jackson was charged with federal firearms offenses in addition to drug trafficking. He was not charged with any gun-related crimes. The error was made in reporting.