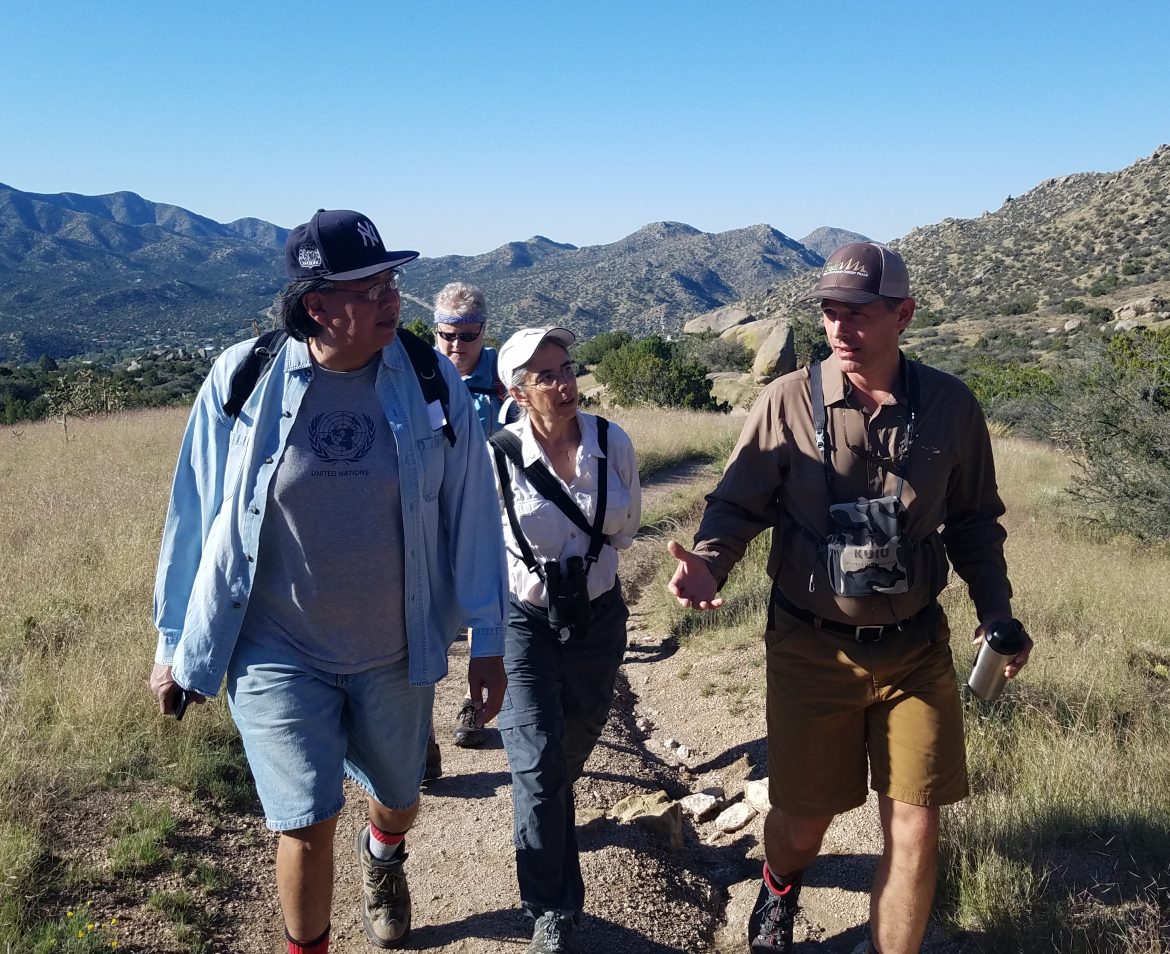 Last weekend, U.S. Sen. Martin Heinrich and his wife Julie pulled up to an Albuquerque trailhead and were greeted by a group of eager supporters with hiking poles and hydration packs at the ready. Almost immediately, Heinrich became an impromptu trail guide, educating his constituents on the different native plants along the trail and which animals use them as food sources. At least twice, unsuspecting hikers recognized the affable sportsman who has worked in Washington, D.C. since 2009. One family hiking towards the top of the trail passed the Heinrich entourage on its way back to the trail head. As the two groups converged, one woman looked at Heinrich and asked, “Is it really you?

As an avid hunter, outdoorsman and an advocate for protecting public lands, this is Heinrich’s wheelhouse.

Related: The Hard Hat and The Beast: Mick Rich crisscrosses the state looking for votes

Fittingly, the trail Heinrich picked for a hike with some of his constituents included sharp turns and switchbacks, just as the race for U.S. Senate has seen a sharp turn in the last six weeks.

The U.S. Senate race morphed from what appeared to be an easy win for Heinrich to a frantic fundraising and campaigning effort weeks after the primary.

Heinrich began his reelection campaign with only one opponent—Republican political newcomer Mick Rich—and then State Land Commissioner Aubrey Dunn clinched the Libertarian nomination for U.S. Senate and it became a three-way race. A June poll showed Heinrich with about a 10 point lead over Rich and Dunn in last place with the support of about five percent of likely voters.

But when former governor Gary Johnson replaced Dunn as the Libertarian nominee, the Senate race took another turn. Now, some polls show Johnson in second place, while others say it’s Rich behind Heinrich. Those newer polls seem to have changed the Heinrich campaign’s focus—to beat a former Republican governor, turned two-time Libertarian presidential nominee, who wants to legalize marijuana.

In the weeks since Johnson entered the race, the tone of Heinrich’s campaign emails have changed. Earlier this year, fundraising emails cited money and ads from the “Koch Brothers” as a major threat to the campaign, but did not mention either challenger by name. Now, fundraising emails have a sharper focus on Johnson and the Elect Liberty PAC, a committee based out of Utah supporting Johnson. The latest campaign finance reports show Heinrich with more more cash-on-hand than Johnson, but Heinrich acknowledged that could easily change. He pointed to when he barely won the election for the open U.S. Senate seat against former U.S. Rep Heather Wilson.

“In 2012, I was sitting on about a 12 point lead over Heather Wilson and we saw just millions of dollars in advertising come in from outside groups in August,” Heinrich said. “It narrowed that gap to five on election day.”

He blames the landmark Citizens United decision for an increase of money from outside sources like Super PACs and what is often referred to as dark money. Heinrich said it can be hard to predict who might inject cash into a race and when they might do it. For this race, he is anticipating a lot of activity from the Elect Liberty PAC and he wants to be able to counteract their narrative.

“If someone decides they want to put several million dollars in that PAC, we need to be able to tell our side of the story,” Heinrich said.

But, the senator said he doesn’t mind Johnson’s run because he thinks the Libertarian will “spice things up a little bit.”

“I welcome the attention that Gary’s brought to the race, because it was hard getting people to focus, especially with the governor’s race, on the Senate race,” Heinrich said. “So, I’m happy to have Gary in the race.”

On a deeper level, though, Heinrich has some concerns about Johnson’s free-market and limited government views. As he and his supporters stopped at a lookout point along the hiking trail for water before heading back down, one person asked bluntly what Heinrich thought about his Libertarian opponent. He responded just as bluntly.

“We already have a Rand Paul in the Senate, we don’t need two,” Heinrich quipped.

“I agree with Gary on marijuana policy and I agree we shouldn’t be the world’s policemen, but coming with that on his side, comes wanting to cut Medicaid [and] Social Security and that would be devastating,” Heinrich said. “In this state, that would be absolutely devastating.”

Heinrich calls public lands “the great equalizer,” meaning almost everyone can use them regardless of income.

While Heinrich and Johnson’s views about the role of government are at odds with each other, Heinrich’s views on public lands may contrast most with his Republican opponent, Rich. In a previous interview with NM Political Report, Rich compared closing lands off from energy companies and ranchers to that of the hypothetical owner of an expensive car who never drives it.

“Just because something isn’t being exploited to its very limits of what it can withstand, doesn’t mean it’s not working for us,” Heinrich said.

He said he has also had conversations with Democratic gubernatorial candidate Michelle Lujan Grisham about creating an office of outdoor recreation if she is elected.

But he seems less enthusiastic about the thought of Lujan Grisham’s opponent, Steve Pearce, becoming governor.

“I think it’s important that people remember that the biggest advocate for shrinking the Organ Mountains [monument] was Steve Pearce,” Heinrich said. “He’s done a remarkable job remaking himself, as part of this election cycle, and trying to run as a moderate Republican.”

Regardless of allies in state government, though, Heinrich will still do a majority of his work in the nation’s capital and will be tasked with making alliances there, even as his most prominent Republican ally won’t return.

Heinrich faced criticism when he moved his family to Silver Spring, Maryland, citing a strong need to spend time with his wife and children.

“If you’re going to be an effective senator you also have to truly get to know your colleagues which means having people over to dinner and actually spending time together,” Heinrich said.

But one senator Heinrich has spent plenty of time with, Republican Sen. Jeff Flake of Arizona, will only be around for a few more months.

Heinrich and Flake’s friendship began with the two sharing pictures of their respective outdoor adventures during a late-night Senate budget debate, Heinrich said. That shared passion for outdoor recreation eventually led to the two taking part in a survival reality show on a secluded island in the South Pacific Ocean, an idea initially suggested by Flake.

“[Flake] came back to me a few weeks [after the budget debate] and said, ‘I’ve got a crazy idea,’” Heinrich said.

Earlier this year, Flake and Heinrich cosponsored a bill to ban bump stock devices in response to a mass shooting in Las Vegas, Nevada. Heinrich credits that kind of bipartisan cooperation to their trip together.

“It built a trust where we could determine within five minutes of talking whether we could work on an issue together or not,” Heinrich said.

Still, Heinrich has received a lot of criticism for his decision to move his family out of New Mexico.

Rich, whose children are adults, has publicly said he would fly back to New Mexico at every opportunity and would not live in or near Washington, D.C. Johnson also said he would maintain his residence in Taos.

Heinrich and his wife still own a house in southeast Albuquerque.

He didn’t move until about eight months into his Senate term and reportedly often slept on a mat in his office throughout his two terms as a U.S. Representative.

“I love coming home [to New Mexico] because this is where I chose to live,” Heinrich said.

But in less than two months, voters will ultimately have a large part in where he calls home next year.