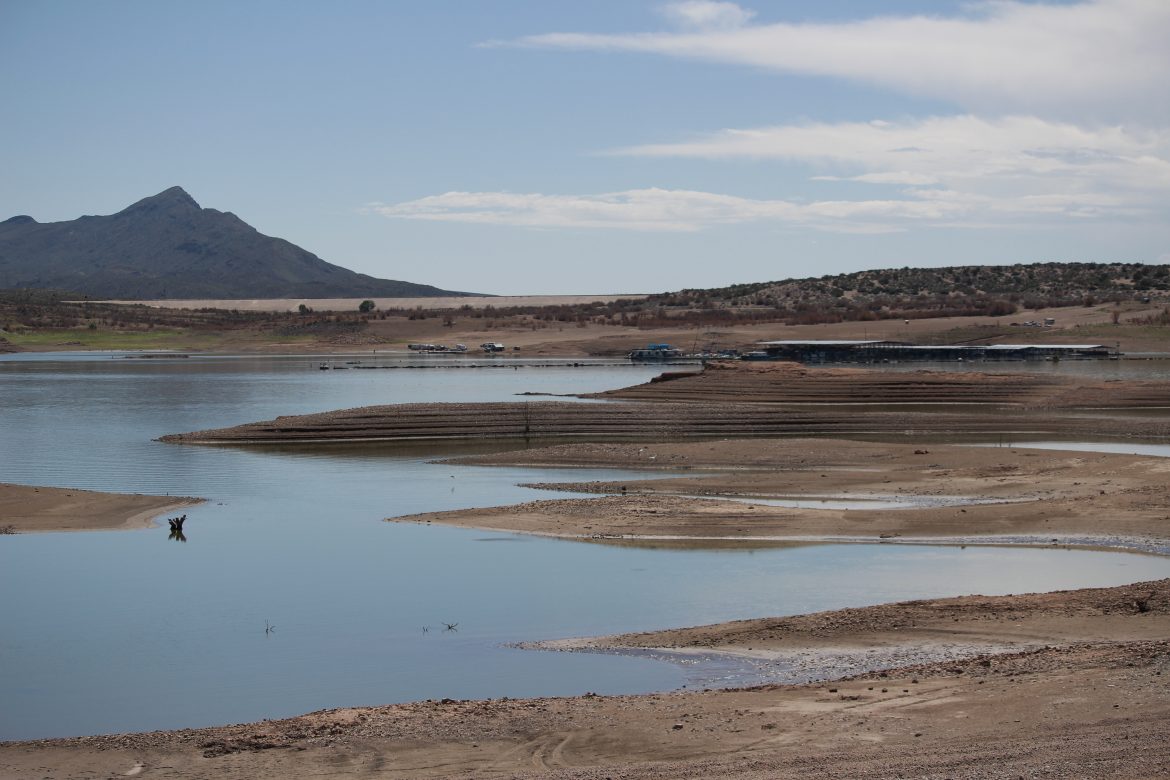 Right now, New Mexico’s largest reservoir is at about three percent capacity, with just 62,573 acre feet of water in storage as of September 20.

Elephant Butte Reservoir’s low levels offer a glimpse of the past, as well as insight into the future. Over the past few decades, southwestern states like New Mexico have on average experienced warmer temperatures, earlier springs and less snowpack in the mountains. And it’s a trend that’s predicted to continue.

“There was no spring runoff this year. We started this year at basically the point we left off at last year,” says Mary Carlson, a spokesperson for the U.S. Bureau of Reclamation, which operates Elephant Butte Dam, just north of the town of Truth or Consequences. The federal agency runs the Rio Grande Project, which stores water that legally must be delivered downstream to the Elephant Butte Irrigation District, the state of Texas and Mexico.

This story is the first of a three-part series about the Rio Grande, its reservoirs and the U.S. Supreme Court battle over its waters.

Drought has moved around the U.S. Southwest since the late 1990s, and last winter’s dismal snowpack broke records in the headwaters of the Rio Grande. Without runoff this spring, by February reservoir levels around the state—including at Elephant Butte—were as high as they were going to be this year. “We had some help from the monsoons,” Carlson says, “but not as much as we wanted, where we wanted.”

Many spots around New Mexico reveal signs of drought and climate change, whether it’s the puny flows of the Rio Grande, the fire-ravaged forests of the Jemez Mountains or the crispy rangelands of the northeast. But Elephant Butte Reservoir offers perhaps the starkest reminder that keeping up with the changing climate may require questioning long-held ideas of how water is managed and shared, how we think about rivers and reservoirs and even, who we consider our friends or foes.

For farmers in southern New Mexico, this year “really stung,” says Gary Esslinger, manager of Elephant Butte Irrigation District, or EBID. This year, he explains, less than 45,000 acre-feet of water flowed via the Rio Grande into Elephant Butte. That’s the lowest recorded inflow since the dam was built in the early 20th century.

“There was virtually no snowpack runoff, and whatever there was didn’t get to Elephant Butte,” he says. “The Middle Rio Grande, that river was drying up way too early.”

Beginning in early April, when the state’s largest river is usually running high with snowmelt, it began to dry south of Socorro and upstream of the reservoir.

EBID has over 90,000 acres of irrigable land, and about 8,000 members, about half of whom own two acres of land or less, Esslinger says. This year, about 75,000 of the district’s acres were in production, and farmers received a ten-inch allotment of water from the Rio Grande Project. A normal allotment is 36 inches, and in 2017—after a robust snowpack in the mountains—they received 24 inches.

As in the past, farmers supplemented their irrigation supplies from the river by pumping groundwater. That’s something farmers have done for decades, increasingly so since 2003. Farmers with larger landholdings will fallow some fields, not planting some fields so they can move what surface water they have closer to their irrigation wells, Esslinger explains. Then they can “stack” both surface and ground water on those lands.

But Esslinger lets out a long, deep sigh when asked what will happen next year. Farmers can hope that the forecasts are right, that conditions in the Southwest will flip from La Niña to El Niño, bringing moisture to the region, he says. “But I’m dealing with ‘La Nada,’” Esslinger says. “I have to face reality.”

Watching the reservoir empty out this year makes farmers feel like they are running out of water, he says. At the same time, they’re uncertain about how long their groundwater supplies will last, even though the district tries to monitor groundwater levels and has hired a full-time groundwater specialist.

“We’re not cratering; it’s not Doomsville yet,” he says. “But we’ve got to find another source.” People can pray for rain and snow, he says, but the challenge is finding a long-term, consistent water source. And western states, including New Mexico, don’t have that.

“Everybody’s thinking, ‘Well, climate change is really happening,’ and I think we need to change the way we’re thinking. We keep looking for improvement in the West,” he says.

With improvement unlikely, Esslinger says he’s started considering more radical solutions—like whether western states could share the cost of a canal that would move water from the East, from someplace like the Mississippi River. “People think I might be crazy, but I think we should start looking at it,” he says. “I don’t think we can continue to keep playing this game of predicting and forecasting: we need to find some water and get it over here to the West.”

Farmers face other challenges, too, including the growing expense of pumping groundwater and an “insurmountable” number of regulations, he says. It’s also hard to find workers to hand-pick crops like chile and onions, thanks to changes in immigration policy.

Then there are the market pressures. This year, he explains, farms around Yuma, Arizona and southern California flooded the market with onions, forcing New Mexico farmers to sell theirs at a lower price. Cheaper alfalfa comes up from Mexico, he says. And even chile farmers have taken a hit: “In Mexico, they can grow chile and jalapeños much cheaper than we can grow it here, because of the labor, and they ship it here,” he says. “Then, when our chile is ready, the market we could have had is already been flooded by a lower-cost chile.”

Meanwhile, as the average age of farmers in the West keeps rising—most are in their 50s, 60s or 70s—Esslinger questions who will farm New Mexico in the coming years. “It would be like taking your life savings to Vegas and gambling: what young farmer would want to do that?” he asks. “Or, if you’re a farmer from Iowa or someplace else, where you grew up with a plentiful amount of water and rainfall to grow your crops, why would you come here?”

Farmers in southern New Mexico have yet another problem: uncertainty over a lawsuit moving through the U.S. Supreme Court.

Five years ago, Texas sued New Mexico and Colorado, alleging that New Mexico failed for decades to send its legal share of Rio Grande water downstream by allowing farmers in southern New Mexico to pump groundwater from near the river. Texas filed the lawsuit after New Mexico sued over a 2008 operating agreement between the U.S. Bureau of Reclamation, EBID and Texas water users. This year, the Supreme Court allowed the U.S. government to intervene in the case against New Mexico.

Although EBID lies within the boundaries of New Mexico, for the purposes of water and compliance with the Rio Grande Compact of 1938, it’s more closely aligned with Texas. That’s because under the compact, New Mexico doesn’t deliver Texas’ water at the state line. Rather, water goes to Elephant Butte Reservoir, about 100 miles north of Texas. From there, the Reclamation delivers it to farmers in both southern New Mexico and Texas.

“We get a lot of harassment and bad press, with people saying, ‘Why can’t you just agree with [the state of New Mexico]?’” Esslinger says. “But when it comes to water accounting and the federal accounting of water through [Colorado, New Mexico and Texas], we’re in Texas.”

Of the roughly 90,000 irrigable acres of land within EBID, about 75,000 are in production this year

All that confusion and uncertainty just makes things harder for farmers, he says.

“There are so many lines in the sand that have been crossed by our own officials in the state that it makes it very difficult to sit in a room and even try to talk about settlement or negotiation,” Esslinger says. “Everyone is fearful of what they might lose, so they have fortified their positions.” People on opposites sides of the suit can’t even visit with one another, he says. And they certainly can’t plan for next year, never mind the longer-term future.

Meanwhile, as drought lengthens, water managers are refining their models and developing new technologies to manage water and also do things like reduce evaporation from reservoirs, says Reclamation’s Carlson. Agencies, irrigation districts, hydrologists and stakeholders are in constant communication with one another, moving water and trying to work together in new ways.

Along with partners, the federal agency also tried to keep as much water as possible flowing in the Middle Rio Grande this year, says Carlson. Recently, Reclamation leased 20,000 acre feet of water from the Albuquerque Bernalillo County Water Utility Authority to keep the river running through the city through the end of the year.

And while it may be upsetting to see reservoirs like Elephant Butte drop so low this year, they have done their job, she says.

Storing water from past years allows people to survive dry years like 2018, Carlson says. Despite this year’s historically dry conditions, Reclamation delivered about 60 percent of a full supply of Rio Grande Project water this year.

“We live in the desert and are more and more dependent on reservoirs,” she says. “This is the year that reservoirs were built for; our reservoirs are doing what they were meant to do, and this year, Elephant Butte performed like a champ.”

As for next year? “We’re all on the edges of our seat,” she says. “Waiting to see what’s to come.”

This story is the first of a three-part series about the Rio Grande, its reservoirs and the U.S. Supreme Court battle over its waters. Parts two and three will publish next week. You can also read all of our past coverage of the Rio Grande and the Texas v. New Mexico & Colorado litigation.