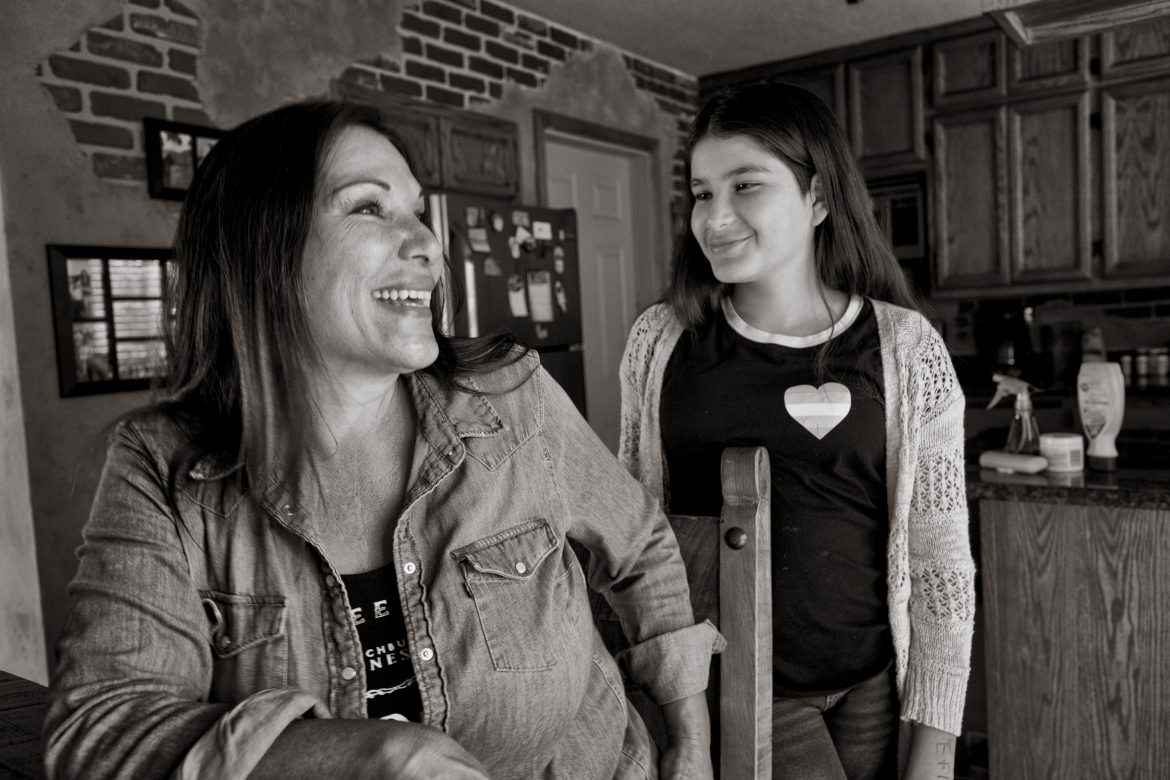 ALBUQUERQUE — Joan Marentes knew her career in the Albuquerque Police Department was over the moment a state worker said she was ineligible for public assistance.

Assigned to the Crimes Against Children Unit, Marentes was a decorated detective, named Officer of the Year in 2009 for her work keeping kids out of harm’s way. Often those same kids ended up placed in the care of grandparents or other relatives.

Now, in an ironic twist, she had taken emergency custody of her own granddaughter after learning the child was being abused by her  parents.

Like hundreds of other grandparents, Marentes trusted that the state would help her deal with the sudden financial stress of taking in a child.

Instead, she got a categorical rejection.

Her salary as a police officer, the case worker told her, was too high to qualify for child care assistance, cash assistance, food stamps, or any public benefit except Medicaid for her granddaughter.

Unable to afford the expense of child care — which, in New Mexico, costs more than public university tuition — Marentes submitted her resignation.

The number of children being raised by grandparents has exploded across New Mexico, nearly doubling to more than 55,000 — 10 percent of all the state’s children — since 1990. Today, grandparents in this state are caring for their grandchildren at astounding rates — more than three times the national average in some opioid-ravaged counties.

And each child a grandparent takes in saves the state up to $25,000 a year in foster care costs.

But like Marentes, many of those grandparents have found themselves locked out of assistance programs, often even when they meet eligibility requirements.

Dozens of grandparents interviewed for this story described myriad consequences, many arriving at the edge of financial ruin after being unable to access public benefits.

Some, turned away at the window of the local benefits office, must choose between paying for child care or paying the mortgage. Others, told they earn too much money to qualify, are selling off their personal belongings to pay for groceries and school supplies. Still others, unable to pay rent and cover the sudden unanticipated costs of caring for young ones, have ended up homeless – with their grandchildren in tow.

New Mexico’s handling of applications for assistance has long been under attack from lawyers and child advocates, who allege that state agencies consistently and illegally deny benefits to needy families.

In 1988, the state Human Services Department, which administers food stamps, TANF and Medicaid, was sued by a low-income mother who ran into a procedural brick wall when she tried to apply for public benefits.

The judge in that case, now known as Hatten-Gonzalez v. Earnest, ruled that HSD imposed inconsistent and excessive requirements on people seeking help. The department has been operating under a consent decree—a court-ordered agreement to bring procedures in line with federal law—ever since.

Again in 2014, the courts found HSD was inappropriately denying benefits to applicants. In 2016, the agency was caught defrauding residents out of emergency food assistance. It did so, according to employee testimony, by falsifying documents to show that applicants’ earnings exceeded the threshold for eligibility.

New Mexicans seeking help describe running into many of those same barriers today — both in aid programs administered by HSD, and in the state’s child care assistance program, administered by the New Mexico Children, Youth and Families Department.

‘I had no choice’

Access to child care assistance and other public benefits, a hurdle for low income residents in many states, is a particularly high-stakes issue in New Mexico.

Even as rates of poverty have remained stubbornly high, enrollment for certain benefits, such as Temporary Assistance for Needy Families, or TANF, has dwindled — a result of stricter requirements, according to some analysts.

CYFD Secretary Monique Jacobson acknowledges that access to child care assistance and other benefits is a longstanding problem — particularly for grandparents — underscored by the fact that only 30 percent of the state’s eligible families currently receive child care assistance.

“This is an issue that was raised to me often when I started,” says Jacobson, who took the helm of CYFD in 2015. “How can you do more to help family members who are stepping up and taking on these incredibly important and difficult roles of caring for children?”

“We’ve done a huge push to make people more aware that child care assistance exists,” she says, referring to the “Pull Together” campaign, a multimillion-dollar publicity initiative that includes the delivery of information pamphlets about CYFD programs to various state offices.

Yet more than a dozen people interviewed for this story described a baffling and often contradictory application process.

Many, whose earnings fall within federal income eligibility guidelines for child care assistance, say they were unable to determine the basis on which their application was denied, even with help from attorneys.

Some say they were told they were ineligible without having their application even processed.

Others found themselves caught in a labyrinthine quest, often involving multiple state agencies, to produce documents for their application.

“I spent months on the phone … just circles and circles,” recounts Angela, an exasperated grandmother who asked for her last name to be withheld because she is currently in custody hearings. She describes having to travel constantly between various CYFD and HSD offices over a period of months after recently taking in her young granddaughter. Finally, unable to take further time off work to complete her application, she gave up.

“I just didn’t think I was going to win,” she says.

She is now paying for child care with a credit card, to the tune of $750 a month.

Joan Marentes, the former APD detective forced into early retirement after failing to get child care assistance and other benefits, now raises her granddaughter with the help of a reduced retirement stipend from the police department.

Had her HSD caseworker explained the intricacies of the system, she likely would have qualified for child care assistance based on her granddaughter’s eligibility for TANF. She wouldn’t have retired from a job she loved.

Instead, she says, “I had no choice.” She feared for the child’s safety. Based on what she had seen in her job in the Crimes Against Children Unit, she says, “I wasn’t going to end up holding a candle for her at a vigil.”

Today, Marentes is running for a seat in the New Mexico House of Representatives on the GOP ticket, on a platform of tightening enforcement of crimes against children and fixing a public benefits system that she describes as “basically giving you the finger.”

Access to child care assistance, crucial for all low-income families, is especially vital for grandparents. Over one in five grandparents raising grandchildren in New Mexico lives below the poverty line, and many more get by on fixed income from social security or retirement.

Many take custody of their grandchildren after an unexpected call from a CYFD worker. The message is clear: Take the kids or they go to foster care. Others spend thousands on legal fees in family court, leaving their bank accounts drained even before taking on the financial burden of raising children for a second time.

“Every action causes a reaction. If they’re working, then child care becomes an issue. If they’re retired or not working, then they are in a financial emergency and need cash benefits immediately,” says Tamie Gregg, a caseworker with Methodist Children’s Home in Albuquerque who works to connect grandparents with assistance programs.

Social workers, including Gregg, report increasing numbers of grandparents in crisis. Faced with an overnight increase to their households, confronted with a waiting list for housing assistance 3,000-people long, some have ended up in homeless shelters with their grandchildren.

“It can be terribly overwhelming,” says Delfinia Romero, a longtime facilitator of support groups for stressed-out grandparents.

In 2015, she was appointed to a task force formed by the state legislature to identify obstacles that these grandparents face. The task force determined that the state’s public benefits system, designed for individuals or traditional family units, was unequipped to handle the urgent and immediate needs of grandparents, many of whom do not hold possession of their grandchildren’s legal documents. Even their guardianship status might be difficult to determine.

As a result, Romero says, grandparents unable to figure out the process often give up and cut corners at the expense of medical needs.

“A lot of grandparents will not buy their medications because the kids need shoes or they need food,” she says. “That’s not a solution.”

Neither of those recommendations has been enacted.

Help Searchlight New Mexico continue to report the news that matters to you. Contribute at http://searchlightnm.com/support-investigative-reporting/