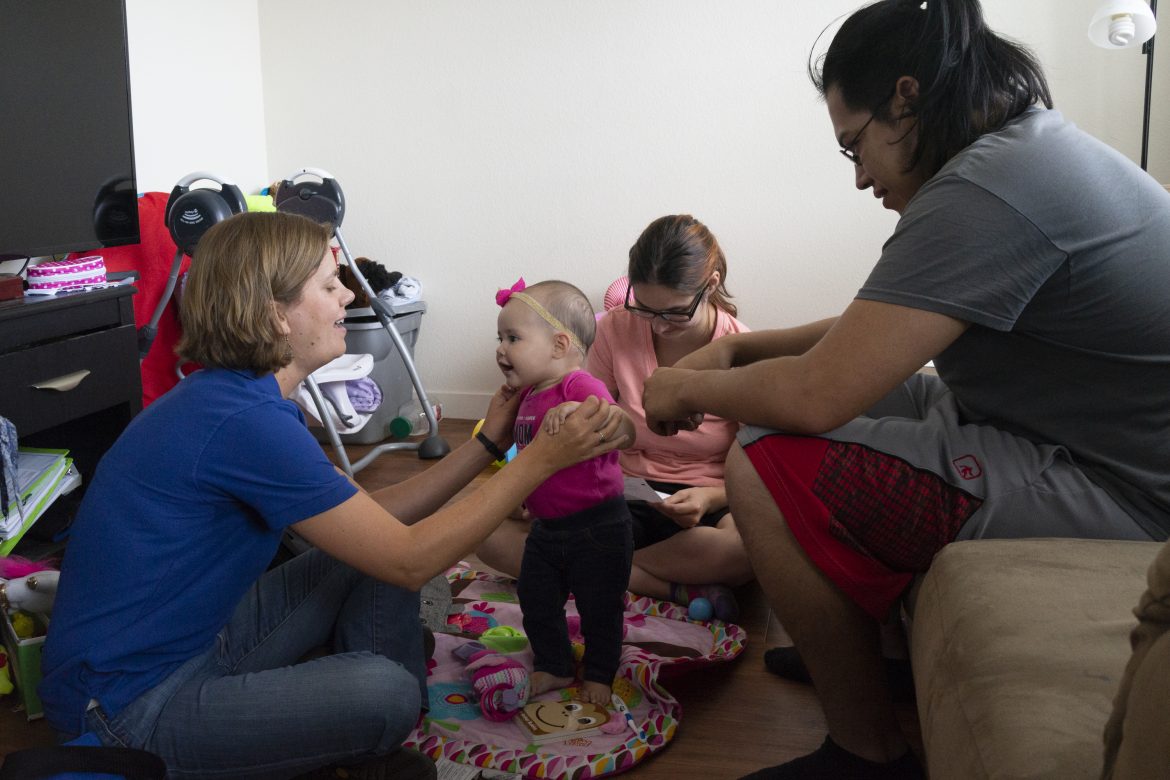 Despite strong evidence that home visiting promotes healthy families and children, state officials have diverted millions of dollars from the program in order to fund child care assistance, according to documents obtained by Searchlight New Mexico.

Since 2016, the Children, Youth and Families Department (CYFD) has moved a total of nearly $12 million earmarked for home visiting into child care assistance, saying the reallocation is necessary to meet the rising costs of child care. Among all the early childhood programs, child care assistance is the state flagship, helping tens of thousands of working New Mexico families care for their children.

Officials shifted the funds from one pot to another because the state’s network of home-visiting providers, on the whole, failed to spend all the available money.

“There’s a misconception out there that because we’re focused on childcare assistance, we’re not focused on home visiting, and that’s not true at all,” CYFD Secretary Monique Jacobson said. When money for home visiting went unclaimed, she said, her department chose to spend it on child care rather than return the money to the state general fund.

At its most simple, home visiting is a voluntary program in which professionals trained in early childhood and maternal health issues visit families with young children in their homes several times a month. The visits, which typically run until a child reaches 3, are free to parents and last about an hour. Home visitors offer guidance in health and child development, parenting tips and help with accessing social services.

At a cost to taxpayers of $18.7 million, about 3,200 New Mexico families received at least one state-funded home visit last year. By comparison, the state spent $129 million to help 19,500 families with child care.

Home visiting enjoys broad legislative support and — at least in some cases — is based on research that shows it to be beneficial to kids and families. That raises a key question: Why doesn’t New Mexico spend millions of dollars on a proven program that lawmakers thought they were supporting?

To answer, Searchlight obtained documents through an open-records request. Interviews with policymakers and home-visiting providers, along with a review of data and research, identified the following factors:

Home visiting is a harder sell than child care assistance. Home-visiting providers say they must find eligible families, explain what they offer, and convince them to enroll – all before the provider is paid a dime. The three dozen home visiting providers are reimbursed by the state at a base rate of $3,500 per child annually. And if a family drops out, payments stop.

“We know sometimes we’re going to have to knock on the door a few times [and] leave our card lots of times,” said Regina Huffman, co-founder and executive director of Avenues Early Childhood Services in Gallup, a home visiting provider that serves potential clients across the 5,400 square miles of McKinley County.

A single contract can take weeks — with none of it reimbursed by the state until the first home visit.

Home-visiting providers interviewed by Searchlight said if the state could ease some of the barriers, home visiting could grow to serve more New Mexico families.

Research indicates that could be a net gain for a state that consistently ranks at the bottom for national indicators of child well-being.

Does home visiting have broad support?

Lawmakers and the state’s Legislative Finance Committee have consistently pushed for and awarded more funds for home visiting.

Numerous studies of the Nurse-Family Partnership model, including one by the Nobel Prize-winning economist James Heckman, found benefits to child cognition, emotional skills and maternal mental health that lasted for years. That model uses registered nurses, who as home visitors draw higher salaries than workers with associate’s degrees in early childhood.

Convinced by this research, New Mexico has made increasing investments on home visiting – from $2.3 million in 2012 to $18.7 million in 2018, with about half of it general fund dollars.

The rise in funding translates to more families being served. In 2012, New Mexico contracted with 15 companies to provide home visits to 608 families. In fiscal year 2018, the state paid 33 providers to serve nearly 3,200 families.

But it’s a drop in the bucket compared to what the state gives to child care assistance. Total spending on child care assistance grew from $83 million in 2012 to $129 million budgeted this year — the state’s share is $56 million and the rest is federal dollars. The funds helped parents of about 19,500 of New Mexico’s kids afford childcare, according to a 2018 Legislative Finance Committee report.

“I’m a huge believer in childcare and childcare assistance,” Jacobson said. “I believe it’s one of the single greatest tools we have when it comes to addressing issues like child abuse and the multigenerational issues that impact our children as a whole.”

Funding for home visiting goes into a pot that reimburses companies when they bill the state. As the past three fiscal years ended, some of the state’s contracted home visiting companies hadn’t served as many families as expected, or had served them in ways that couldn’t be reimbursed. The $12 million total in diverted funds is the difference between what was budgeted and what was actually paid out.

Does it actually work?

Despite the return of funds, CYFD and home-visiting professionals alike said it would be a mistake to conclude the program itself is floundering. Yet, according to both, there is room for improvement on all sides.

A model can fall short of the evidence-based standard yet still be effective, as proven by First Born, a program that was developed in New Mexico back 1998 and is now run by Santa Fe Community College. It has been embraced by 10 home visiting providers across the state and its effectiveness is well established. According to a 2016 RAND study, children enrolled in First Born programs make fewer emergency room and unscheduled doctor visits in their first year of life than their peers.

About a fifth of the nearly 3,200 families the state funded this past year were enrolled in an evidence-based home visiting program — Nurse-Family Partnership through the UNM Center for Development and Disability, or Parents As Teachers through UNM’s CDD or one of three other providers. The rest of the families were served by providers working under First Born — like CHI St. Joseph’s Children and Avenues ECS — or four other non-evidence-based models.

What happens during a home visit?

Albuquerque-based CHI St. Joseph’s Children, the largest home visiting provider in New Mexico, is endowment-funded and does not take state money. It serves an average of 750 families a week in Bernalillo County and southern New Mexico.

In a typical day, home visitor Amanda Lin may schedule three visits, during which she listens to parents’ concerns, answers questions and presents a weekly curriculum on topics as varied as baby-proofing a home and developing fine motor skills.

During a July visit to the Albuquerque apartment of 7-month-old Alice and her parents, Jamie and Loren, Lind asked about new behaviors. The big news: Alice had sprouted a new tooth and begun putting her toes in her mouth.

Reading at night, she told Jamie and Loren, “is a good way to calm her down before bedtime. If you can establish reading at night now, by the time she’s 2 she’s going to be asking you, ‘Where’s my book?'”

Then it was on to safety — the cords on the window shades could use shortening. Lind modeled baby-proofing the apartment by crouching down to toddler height.

“You have get down on your hands and knees and ask, ‘What could she possibly choke on?’ and the smaller it is the more excited she’ll be to pick it up,” she said, looking sideways up from the carpeted floor. “When you’re talking about discipline you’re talking about teaching her, and you do not want to spend your whole day saying, ‘No, Alice, you can’t go over there.'”

Returning to St. Joseph’s after the visit, she said the main thing home visitors try to get across to parents is how important it is to simply engage with their child.

“You don’t have to spend a ton of money on electronic gadgets,” she said. “Really what matters is you’re on the floor talking to them.”

What’s being done to fix the problems?

Early childhood experts regard home visiting as a critical piece in the puzzle for improving the dynamics of healthy families and child well-being in New Mexico. So, while no one expects home visitors to suddenly be better paid, a body of research is currently investigating ways to revitalize the process of connecting clients and providers.

The Thornburg Foundation is funding a study by the University of New Mexico School of Medicine to enlist medical providers in the home visiting system. The three-year, $220,000 project is developing materials to teach doctors and nurses about the program, with the expectation that they will connect new parents with home- visiting providers.

“As a state we’ve made steady progress in expanding funding for home visiting, but we’re still serving only [a fraction] of eligible families, so [the foundation’s position is] we should find ways to continue growing it,” said Michael Weinberg, early childhood policy officer with Thornburg.

After launching an outreach program to Bernalillo County medical providers last year, UNM researchers gathered data from five local CYFD-funded home-visiting companies. They found that referrals increased by more than 37 percent thanks to greater engagement by medical personnel, with four of them reporting double-digit increases in families seeking services.

Huffman, of Avenues ECS in Gallup, is working with an informal group of providers around the state to come up with specific recommendations to present to CYFD about how their difficulties could be eased. One thing they agree on? The need is far from being met.

Avenues ECS has been serving McKinley County since 2015. This year it applied for and received funding to serve 80 families. It was near capacity in July.

“If I could have the funding and I could hire enough people, I feel like we could serve this community so that every person with a baby or who’s pregnant could get this service,” Huffman said.

Searchlight New Mexico is a nonprofit, nonpartisan news organization dedicated to investigative journalism. Read more of our stories at projects.searchlightnm.com/ and donate at https://www.newsmatch.org/organizations/searchlight-new-mexico
John R. Roby can be reached at johnroby@searchlightnm.com.