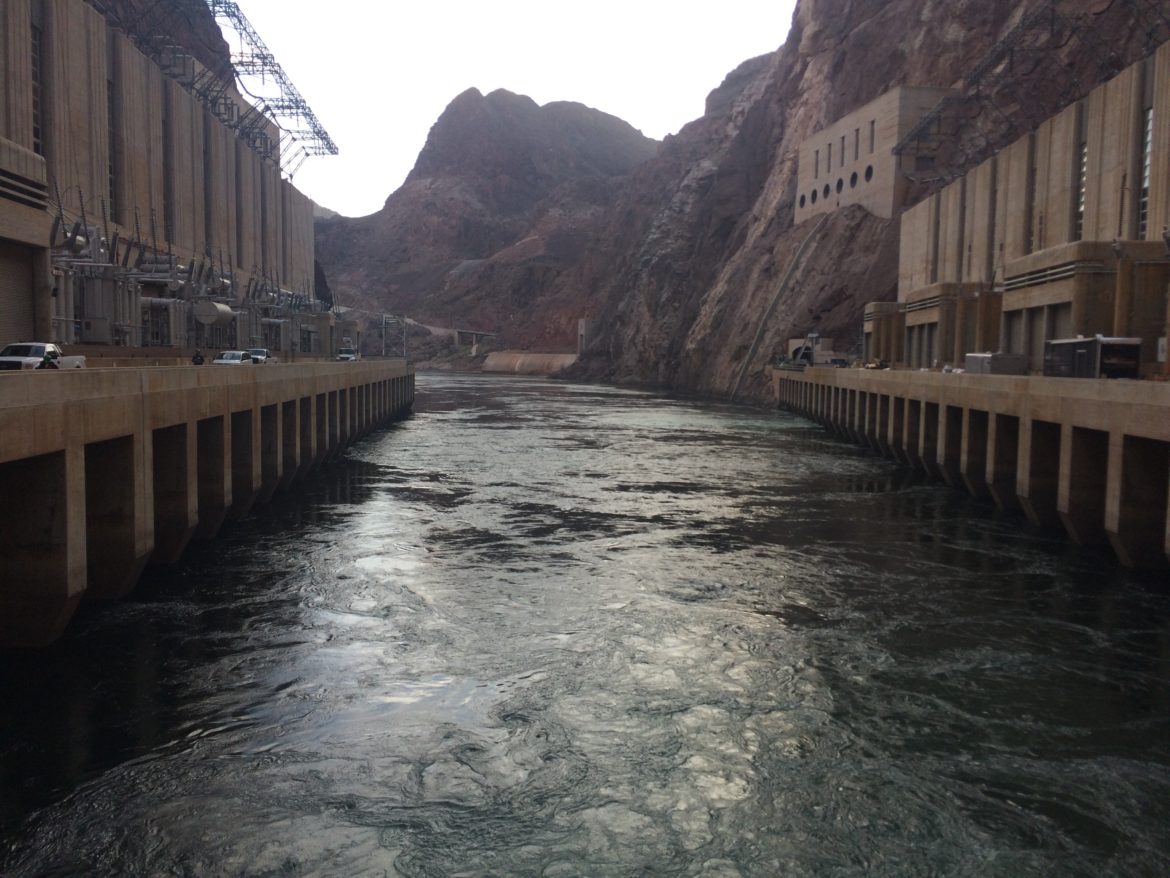 Colorado River at the Hoover Dam

The Colorado River supplies water for more than 36 million people in two countries and seven states, including New Mexico. As river flows and reservoir levels decline due to drought, warming and over-demand, states are wrangling over how to voluntarily conserve water use—before reservoir levels reach critically low levels and trigger mandatory cutbacks. New Mexico is one of the states most vulnerable to the impacts climate change is wreaking on the river. Yet, it’s unclear what the state is doing when it comes to drought management in the state and basin-wide negotiations on the Colorado.

The seven states subject to the Colorado River Compact are divided into Upper Basin states—Wyoming, Colorado, New Mexico and Utah—and Lower Basin states—Arizona, Nevada and California. The Lower Basin’s planning has been sprawling and public, as the three states have tried to agree on a drought contingency plan that will keep Lake Mead’s levels high enough to keep farmers in southern California and central Arizona and cities like Las Vegas, Phoenix and San Diego from having their water supplies curtailed.

Meanwhile, Upper Basin states are working out a drought contingency plan, too.

Under the Colorado River Compact, New Mexico is allocated 11 ¼ percent of the Upper Basin’s annual allocation of 7.5 million acre feet. Though the Colorado River itself does not flow through the state, some of its tributaries do, including the San Juan River, which supplies the San Juan-Chama Project. That federal project delivers water to cities like Albuquerque and Santa Fe and the Middle Rio Grande Conservancy District. Aztec, Farmington and Bloomfield also rely on water from the San Juan River, and both the Navajo Indian Irrigation Project and the Navajo-Gallup Water Supply Project, which is still being built, rely on water from the Colorado River Basin.

Unlike other Upper Basin states, New Mexico has fully allocated its share of the system’s water, although not all that water has been fully developed yet. That means there’s no wriggle room in the system when it comes to water shortages.

In Colorado, discussions on how to cut its share of water use have generated conflict among water users and between Front Range water users and the more rural Western Slope. Utah’s governor just declared a state of emergency over drought. And earlier this month, Wyoming’s State Engineer warned water users along the Green River, a tributary of the Colorado, that drought could force regulators to curtail diversions if voluntary limits don’t pan out first. According to a new story, State Engineer Patrick Tyrell told stakeholders that the Colorado River Basin system is at “risk of severe disruption.”

The plan’s cornerstone, drought operations, involves managing key reservoirs, such as Flaming Gorge Reservoir in Wyoming, the Aspinall Unit on the Gunnison River in western Colorado and New Mexico’s Navajo Reservoir to make sure Lake Powell doesn’t drop too low.

Backed up behind Glen Canyon Dam, water is stored in Utah’s Lake Powell to allow Upper Basin states to meet their obligations under the Colorado River Compact and send more than 8 million acre feet downstream each year.

To do that, Haas said, models show Lake Powell must stay above an elevation of 3,525 feet.

The Upper Basin’s drought contingency plan also looks at how to reduce water demands, including through voluntary water conservation programs.

At the end of the year, the commission wraps up a pilot program that paid farmers in
Wyoming, Colorado, New Mexico and Utah to conserve water. Through the program, the commission paid farmers about $200 per acre foot of water for water they saved by fallowing fields. It was an experiment, she said, to see if water conservation would help boost storage in Lake Powell.

The commission learned that farmers are interested in compensated conservation programs—but also that those water savings won’t make up for the losses from drought and climate change.

During the four-year pilot project, Haas estimated the Upper Basin will have conserved about 50,000 acre feet. But addressing the deficit at Lake Powell requires about 200,000 to 500,000 acre feet.

Haas said the commission is also exploring weather modification, such as how cloud seeding could increase precipitation in certain areas and at certain times. “We’re not going to see the storage savings we would out of drought management or even drought operations,” she said. “It has not been our focus, but it is still the third leg of our drought contingency plan stool.”

Though it’s no longer her job to represent the interests of only New Mexico, Haas spoke about the importance of the river system to New Mexicans.

Because New Mexico has fully allocated its share of Colorado River water, the state is in a “different boat” from the other Upper Basin states that haven’t come close to fully developing their Colorado River water rights, Haas said: “It’s critical that New Mexicans understand that any sort of shortage as a result of this now-19 year-long drought that we’re in—this aridification and the ‘new normal’ [of climate change]—could disproportionately affect New Mexico.”

The Colorado River system supplies water to cities, farmers, utilities and Native American tribes, she said, adding that a 2014 economic survey of the importance of Colorado River water showed it contributes $60 billion in annual economic activity to New Mexico, and about $30 billion more in labor. There’s also money from recreation and jobs related to building the Navajo-Gallup pipeline. As one of the poorest states, New Mexico shouldn’t take that economic contribution lightly, she added.

“I can’t overestimate the importance of this water to New Mexico,” she said. “Colorado
River issues should be front and center for New Mexicans.”

Losing Colorado River water isn’t outside the realm of possibility.

In 2017, a study showed that between 2000 and 2014, annual Colorado River flows averaged 19 percent below the 1906-1999 average. The models also showed that warming will continue to drive declines in river flows—by between 20 to 30 percent by mid-century and 35 to 55 percent by 2100. More recently, authors from the University of California-Los Angeles and Colorado State University found that 53 percent of the decrease in runoff is attributable to warming; the rest to reduced snowfall within regions that feed into the system.

And the effects of climate change on the basin are occurring at a more accelerated
rate than people had previously thought, Haas said. “These are things that should be of immediate concern to us,” she said. “It’s absolutely a wake up call.”

‘Not enough water for all the lawyers to be right’

John Fleck, director of the Water Resources Program at the University of New Mexico, and an expert on Colorado River issues, pointed out that one-third of the water flowing through a crucial section of the Rio Grande in New Mexico this year was imported from the Colorado River system. That San Juan-Chama water, for example, is what has kept the Middle Rio Grande flowing through Albuquerque this fall.

The Rio Grande in Albuquerque on Monday

“The seven states are engaged in this incredibly important set of negotiations that will
go on for a long time, about how we go about scaling back our use of Colorado River water across the basin in a way that reflects the hydrological reality that there’s just less water in this river than we all came to expect,” Fleck said. “It’s really important that folks in state government in New Mexico take that seriously, and it’s really important and incumbent on them to engage in a public discussion about what our risks are and what our choices are.”

That discussion needs to be a public one, he said, and can’t be left to attorneys advocating that their clients hang on to their full entitlements. “There’s not enough water for all the lawyers to be right,” he said. “We need to be up front about the fact that [cuts] are needed, and we’re going to have to play along with the rest of the basin.”

These discussions are playing out in states like Colorado and Arizona, he said. “I’m a little concerned we don’t have a very robust discussion within New Mexico, about the implications for our Colorado River water users,” he said. “Part of this comes back to this broader question, of the need here in the Middle [Rio Grande] Valley for us to be having broader discussions about what we want our water future to be.”

“We’ve just been patching that together by draining reservoirs and trying to comply with the Endangered Species Act, and haven’t had a very broad community conversation about our values and what we want out of our water,” he said. “And the Colorado River is a part of that.”