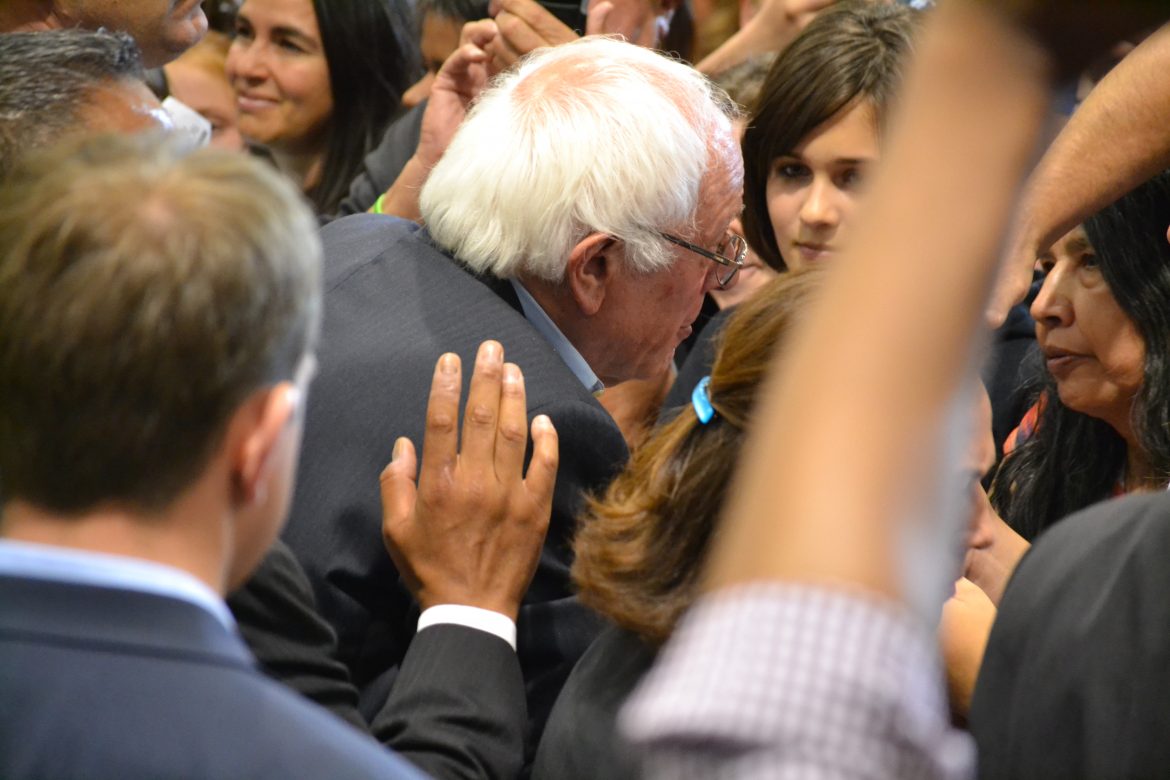 Bernie Sanders after his rally at the Albuquerque Convention Center in May 2016.

After decades in the political wilderness, “Medicare-for-all” and single-payer health care are suddenly popular. The words appear in political advertisements and are cheered at campaign rallies — even in deep-red states. They are promoted by a growing number of high-profile Democratic candidates, like Alexandria Ocasio-Cortez in New York and Rep. Beto O’Rourke in Texas.

Republicans are concerned enough that this month President Donald Trump wrote a scathing op-ed essay that portrayed Medicare for all as a threat to older people and to American freedom.

It is not that. But what exactly these proposals mean to many of the people who say they support them remains unclear.

As a renegade candidate for the 2016 Democratic nomination for president, Sen. Bernie Sanders (I-Vt.) opened the door to such drastic reform. Now, with Republicans showing little aptitude for fixing an expensive, dysfunctional health system, more voters, doctors and politicians are walking through it.

More than 120 members of Congress have signed on as co-sponsors of a bill called the Expanded and Improved Medicare for All Act, up from 62 in 2016. And at least 70 have joined Capitol Hill’s new Medicare for All Caucus.

But some worry the terms “Medicare-for-all” and “single-payer” are at risk of becoming empty campaign slogans. In precise terms, Medicare-for-all means bringing all Americans under the government’s insurance program now reserved for people 65 and over, while single-payer health care would have the government pay everyone’s medical bills. But few politicians are speaking precisely.

Celinda Lake, a Democratic pollster, said, “People read into ‘Medicare-for-all’ what they want to read into it.”

For every candidate with a clear proposal in mind, another uses the phrases as a proxy for voter frustration. The risk, some critics say, is that “Medicare-for-all” could become a Democratic version of the Republican “repeal and replace” slogan — a vote-getter that does not translate to political action because there is neither agreement about what it means nor a viable plan.

“If you’re on the left, you have to have something on health care to say at town halls,” said David Blumenthal, president of the Commonwealth Fund. “So you say this and move on. That’s part of the motivation.”

Dr. Carol Paris, the president of Physicians for a National Health Program, an advocacy group, said she has fielded a number of calls from candidates asking for tutorials on Medicare-for-all.

“I’m heartened, but not persuaded” that all the high-profile talk will result in any action, she said. She worries about what she called “faux ‘Medicare-for-all’ plans” that don’t live up to the mantra.

Polling highlights health care as a top voter concern, and pressure is building for politicians to take meaningful action that could redress the pain caused by personal health care costs that continue to rise faster than inflation.

Maybe that action would be negotiating lower drug prices or fixing flaws in the insurance system that allow for surprise medical bills and high out-of-pocket costs. Republican candidates mostly continue to bad-mouth “Obamacare” as the root of all problems in American health care (of course, it’s not), and some still push to repeal it. They tend to offer only vague assurances that, for example, they will guarantee that people with preexisting conditions can find affordable insurance — proposals that do not withstand expert scrutiny.

In polling this year, 51 percent of Americans and 74 percent of Democrats said they support a single-payer plan. Surveys suggest growing enthusiasm among doctors, too, with more than half in favor.

Yet experts suggest voter support may not withstand warnings of tax increases or changes to employer-sponsored insurance. A 2017 poll from the Kaiser Family Foundation found that support for Medicare-for-all dropped when respondents were told that their taxes might increase or that the government might get “too much control over health care” — a common Republican talking point. (Kaiser Health News is an editorially independent program of the foundation.)

Despite initial enthusiasm, Vermont’s governor let a state single-payer plan die in part because it was calculated that it would require an 11.5 percent payroll tax on businesses and a state income tax of up to 9.5 percent.

The broader goal — affordable, universal health care — could be achieved by a range of strategies. For models, we can look to nations that have generally achieved better health outcomes, for less money, than the United States.

Canada and Britain come particularly close to true single-payer. Their governments pay medical bills with money raised through taxes and have monopolistic negotiating power over prices. But after that, the systems differ.

In Canada, which is Sanders’ inspiration, the government provides health insurance for most medical needs, with no out-of-pocket costs. People can, and often do, buy a second, private plan for any unmet health needs, such as prescription drugs.

Other countries achieve universal health care (or nearly so), but without single-payer. France and Germany have kept an insurance system intact but heavily regulate health care, including by setting the prices for medical procedures and drugs, and requiring all citizens to purchase coverage.

These more incremental options have not captured the American imagination to the same extent as Medicare-for-all. But adopting such a system would require the biggest shift, with significant implications for taxes, patient choice, doctors’ salaries and hospital revenue.

Enthusiastic politicians sometimes gloss over those consequences. For example, Liz Watson, a Democrat running in Indiana’s 9th Congressional District, suggested the impact on doctors’ income was not much of a concern, because they would see a “huge recovery” on expenses since they would no longer need to navigate the bureaucracy of insurance paperwork. But analysts across the board agree single-payer would cut revenue for doctors — many say by about 12 percent on average.

And many voters seem confused by the fundamentals. In polling by the Kaiser Family Foundation, about half of Americans said they believed they would be able to keep their current insurance under a single-payer plan, which is not the case.

Optimism without specifics carries risk, as President Barack Obama learned after promising that people wouldn’t lose their doctors under the Affordable Care Act. That promise haunted the Obama administration — it was singled out as PolitiFact’s “Lie of the Year” in 2013 and is still mocked by members of the Trump White House.

There’s also the thorny issue of how Medicare-for-all would affect the thousands of jobs at private insurers. “We have an insurance industry in Omaha, and people say, ‘I worry about those jobs,’” said Kara Eastman, a Democrat running on Medicare-for-all in Nebraska’s 2nd Congressional District. She suggested people could be retrained, saying there would have to be “repurposing of positions.”

Critics of Medicare-for-all, on the other hand, tend to exaggerate the costs of single-payer: “Denmark’s top tax bracket is nearly 60 percent!” (True, although that’s largely not because of health care.) “Doctors’ incomes will drop 40 percent!” (True, specialists in private practice would probably see pay cuts, but primary care doctors could well see an increase.)

Canadians generally pay higher taxes than Americans do — specifically a goods and services tax, and higher taxes on the wealthy. In Germany, working people pay 7.5 percent of income as a contribution toward comprehensive insurance.

But many Americans pay far more than that when you count premiums, deductibles, copayments and out-of-network charges. Estimates of the tax increases required to support a Medicare-for-all or single-payer system are all over the map, depending on how the plan is structured, the prices paid to providers and drugmakers, and the generosity of benefits.

As a politician famously noted, “Nobody knew health care could be so complicated.”

Some candidates do have clear proposals in mind. Ocasio-Cortez, for example, running for the House from New York’s 14th District, is firm: a single, government-run health plan that covers everyone with no copayments or deductibles and perhaps allows Americans to buy supplemental private coverage. It’s the Canadian approach, textbook single-payer.

But many who back Medicare-for-all are vague or open to incremental approaches, like a “public option” that maintains the current insurance structure while allowing people to buy into Medicare.

O’Rourke casts Medicare-for-all as a starting point for discussion. But he said that what matters most is “high-quality, guaranteed universal health care.” Getting there, he added, “will inevitably require some compromise” — like a public option. Notably, he has not signed on as a co-sponsor of the Medicare-for-all bill because that plan does not allow for-profit providers to participate.

Jared Golden, a Democratic House candidate from Maine’s 2nd District, says in his campaign materials that he favors “something like Medicare for all,” but he clarified that at least initially, he would argue to lower the Medicare eligibility age, a change that wonks often call “Medicare for more.”

And the Wisconsin Democrat Randy Bryce, who is running to replace Speaker Paul Ryan in the House, said he would support a public option or lowering the eligibility age for Medicare. “I don’t want to say that there’s only one way to go about it,” Bryce said.

But many other candidates — both for Congress and for governorships — who are talking “Medicare-for-all” on the campaign trail either did not acknowledge or declined multiple requests to be interviewed on the subject. They include Andrew Gillum, who is running for governor in Florida; Gina Ortiz Jones of Texas’ 23rd District; the California candidate for governor Gavin Newsom; Massachusetts 7th District candidate Ayanna Pressley; and Pennsylvania 1st District candidate Scott Wallace.

Lake, the pollster, suggested that policy details simply aren’t as relevant in a midterm year and that for now we shouldn’t expect a candidate’s support for Medicare-for-all to be anything more than a way to signal his or her values. But she suggested that will change in the run-up to 2020, adding, “When we head into the presidential election, people will probably be pickier and want more details.”

That gives politicians and voters a few years to decide what they mean and what they want when they say they support Medicare-for-all or single-payer health care. For now, it’s hard to read too much into promises.

Paris, who lives in Nashville, said she was surprised and excited to hear that her representative, Jim Cooper, a Blue Dog Democrat, had signed up as a co-sponsor of the Medicare for all bill.

His answer? “Don’t get too excited.”