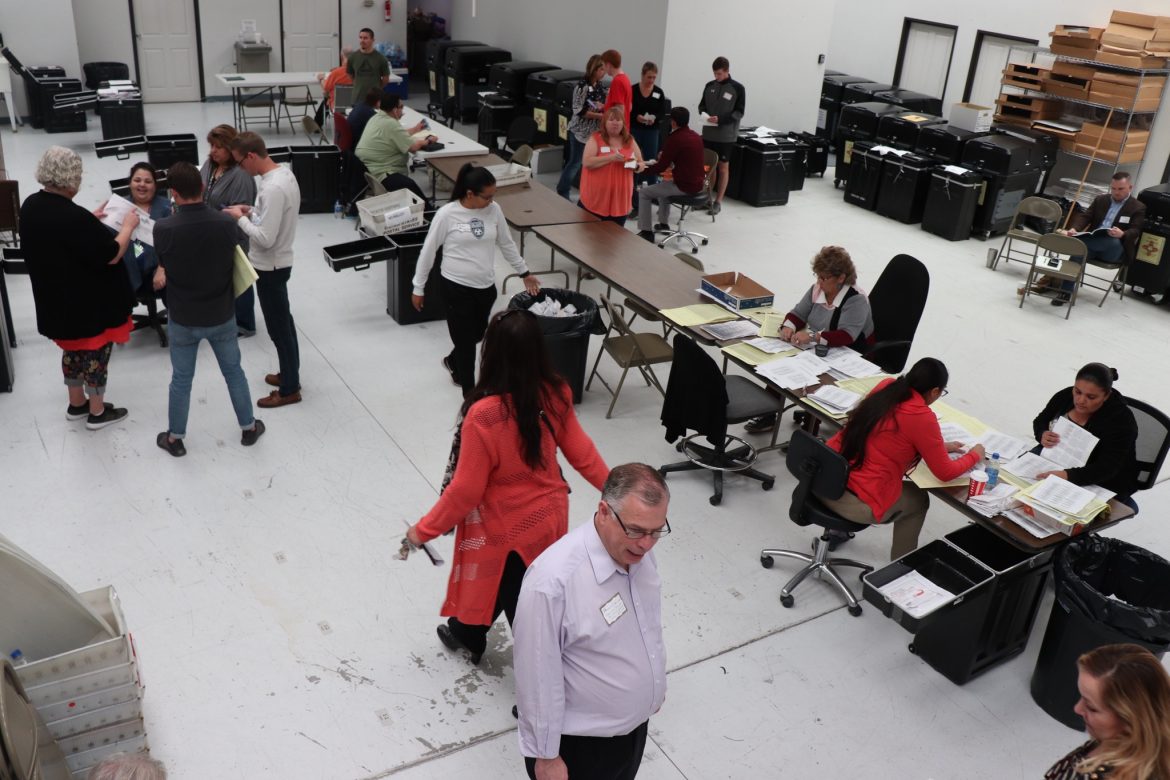 All eyes were on Doña Ana County Wednesday night, as elections observers waited for county election workers to tally thousands of absentee ballots. When the county released the results for the 2nd Congressional District race on Wednesday night, the 6,411 to 1,847 margin gave Democrat Xochitl Torres Small a lead larger than the likely number of provisional ballots left.

Many asked why it took election workers in Doña Ana County so long to count the votes.

It came down to a lack of workers and an unforeseen influx of absentee votes.

The county released the results of 8,350 absentee ballots Wednesday night (only 8,258 of which included votes for the razor-thin 2nd Congressional District race). Using data from the Secretary of State’s office, only one election cycle since 1990 featured more absentee ballots in the county. That was 2002, when a record 10,945 Doña Ana County voters cast ballots by absentee ballot, and over 222,000 statewide did so.

Note: The numbers 2014 numbers are not the full amount of absentee ballots. They are the highest number returned in one race, per the Secretary of State canvass. No data is available for 1998. The numbers from 2018 are not final.

Full data is not available for 2014, and 2018’s numbers are not yet official, but data through the end of early in-person voting, the Saturday before Election Day, shows 2018 absentee votes exceeded both years, combined.

Doña Ana County Clerk Amanda López Askin, who has only been on the job for a matter of weeks after the previous clerk abruptly resigned, said she realized a few weeks ago that the number of votes was higher than normal.

She said she received calls that “organizations across the nation [were] sending absentee ballot applications to residents in Doña Ana County in large numbers.”

Whatever the reason, it reversed a trend in voting patterns, at least in the county.

In recent years, fewer voters have opted to use absentee ballots.However, more than 65,000 voters statewide opted for absentee voting in 2018, the most since 2012.

Since there are no numbers available for absentee voter turnout, that number was calculated by using the race with the most returned absentee ballots; not every voter votes in every race, so the count is likely low, but it’s impossible to know by how much.

County clerks can begin counting absentee ballots as early as five days before Election Day, according to the Secretary of State’s office.

But how Doña Ana County counts its absentee ballots plays a role in the slow count. The county has an independent absent voter board made up of experience poll workers that tallies the ballots, López Askin explained.

However, these poll workers also worked at an early voting location on Saturday night, so they could not start counting the ballots until Sunday.

When they could begin, they worked until late in the night Tuesday before López Askin ordered them to go home. López Askin explained she wanted to make sure each ballot was treated with equal care.

“They worked tirelessly,” she said. “They were devastated that they could not finish.”

Absentee ballots also take longer to count. Poll workers must open two envelopes and verify that the ballot and voter are valid.

López Askin said numerous times that staffing needs to be addressed and that the county will need to look into “filling the vacancies within our office internally as well as doing a targeted recruitment for poll workers across Doña Ana County.”

While the poll workers were gone, the ballots were stored in a secure warehouse.

López Askin said she did not sleep Tuesday night.

Voting overall in Doña Ana County was higher-than-normal for a midterm. The turnout of 51.57 percent, not counting some ballots that remain uncounted including provisional ballots, is the highest of midterms this century (exact turnout data for 1998 is not available on the Secretary of State’s website, though votes cast in key races in Doña Ana County in 1998 suggest turnout below 50 percent).

As for López Askin, she’s still working at counting votes. There were about 950 provisional ballots, and she said poll workers would continue to work toward finalizing the vote count.