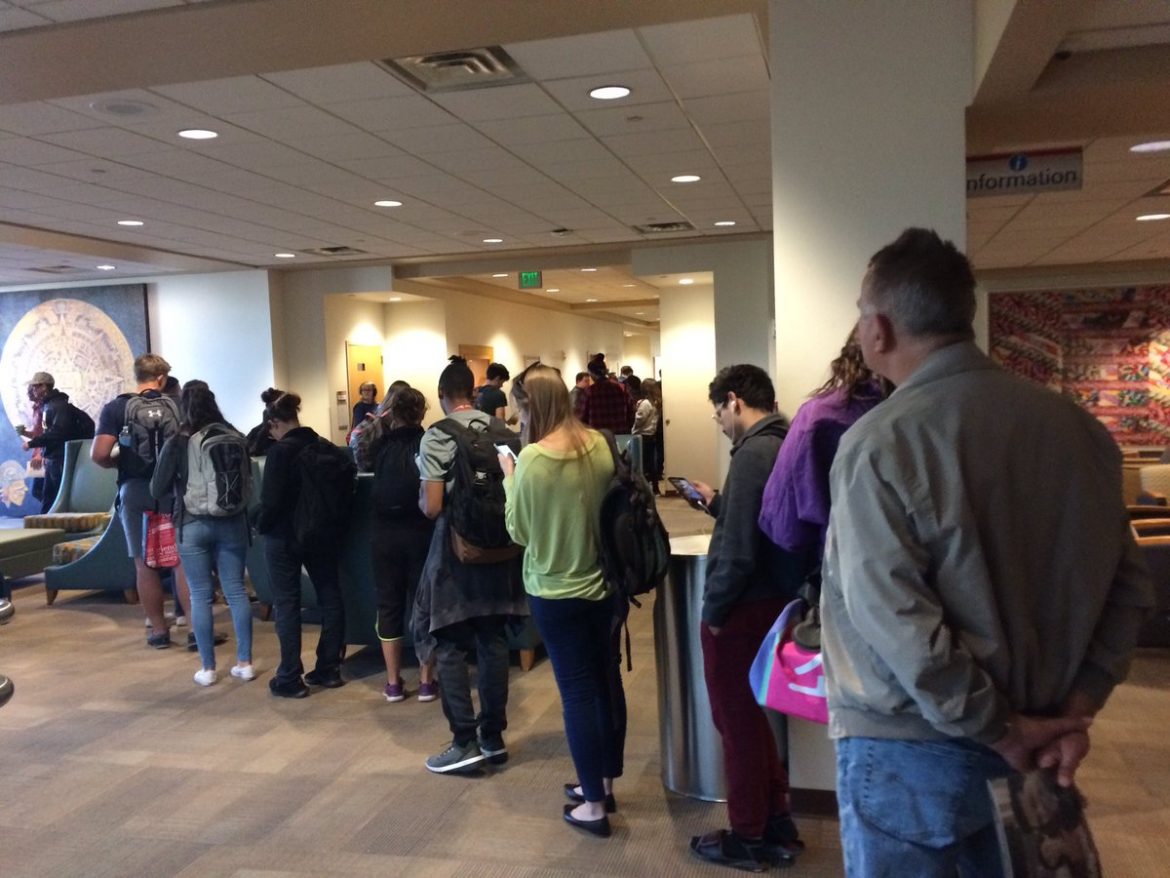 A line to vote on Election Day at the University of New Mexico Student Union Building in Albuquerque.

This is the easy way to explain how Democratic gubernatorial candidate Michelle Lujan Grisham won by a large margin, and also why Democrats all the way down the ballot had a successful night.

Digging further down into the numbers, it shows just how impressive turnout was in some districts, while in others turnout lagged. It isn’t difficult to pick out the pattern when exploring it at the county level.

Just over two-thirds of Santa Fe County’s registered voters turned out, which is a new record for the last two decades. The Democratic stronghold previously  failed to even hit 60 percent in any midterm since 2000. And Doña Ana County cracked 50 percent turnout (51.73 percent) for the first midterm in the same time period.

These three counties alone, all of which were dominated by Democrats, made up over 52 percent of the vote this year.

Darker colors represent higher turnout.
Looking back, the best year to compare 2018 with is likely 2010. It, too, featured an open race for governor, with an unpopular incumbent unable to run for a third term. In 2010, that was Democrat Bill Richardson. This year, Republican Susana Martinez. And while some polls showed both races to be reasonably competitive, Martinez beat Democrat Diane Denish and Lujan Grisham crushed Pearce.

And, like this year, in 2010, the big three Democratic counties made up more than half of the vote.

The counties that saw an increase in turnout of at least one percentage point between 2010 and 2018 were nearly all counties Lujan Grisham and other Democrats won.

Of these, only Sierra County saw such an increase while voting for primarily Republicans. (Attorney General Hector Balderas did carry the county)

Meanwhile, the biggest drop came in Lea County, a key Republican county in southeast New Mexico—and Pearce’s home county. Not only did the turnout drop by 7.26 percentage points, but 861 fewer voters turned out in 2018 than 2010.

Chaves, Otero, and Eddy, along with Lea, are all important Republican counties in southern New Mexico. All had lower turnout rates in 2018 compared to 2010. San Juan, the fifth-most-populous county in the state and also a Republican stronghold, also saw a decline in turnout.

The turnout was much higher when compared to 2014—which had record-low turnout—in nearly every county.

But thanks to a higher amount of registered voters and the higher turnout, 2018 will be a number hard for future midterms to break.

Still, there is still room for improvement: In 1994, when Gary Johnson defeated Bruce King, 68 percent of registered voters went to the polls, in line with the 65 percent from 1990.

* All numbers in this story are through 11/9 and could change until the State Canvassing Board verifies all vote counts. If you’re reading this any day after publication, the numbers are probably slightly different!

Correction: This story originally said Sierra County was among those where statewide Democrats won. Only AG Hector Balderas did.