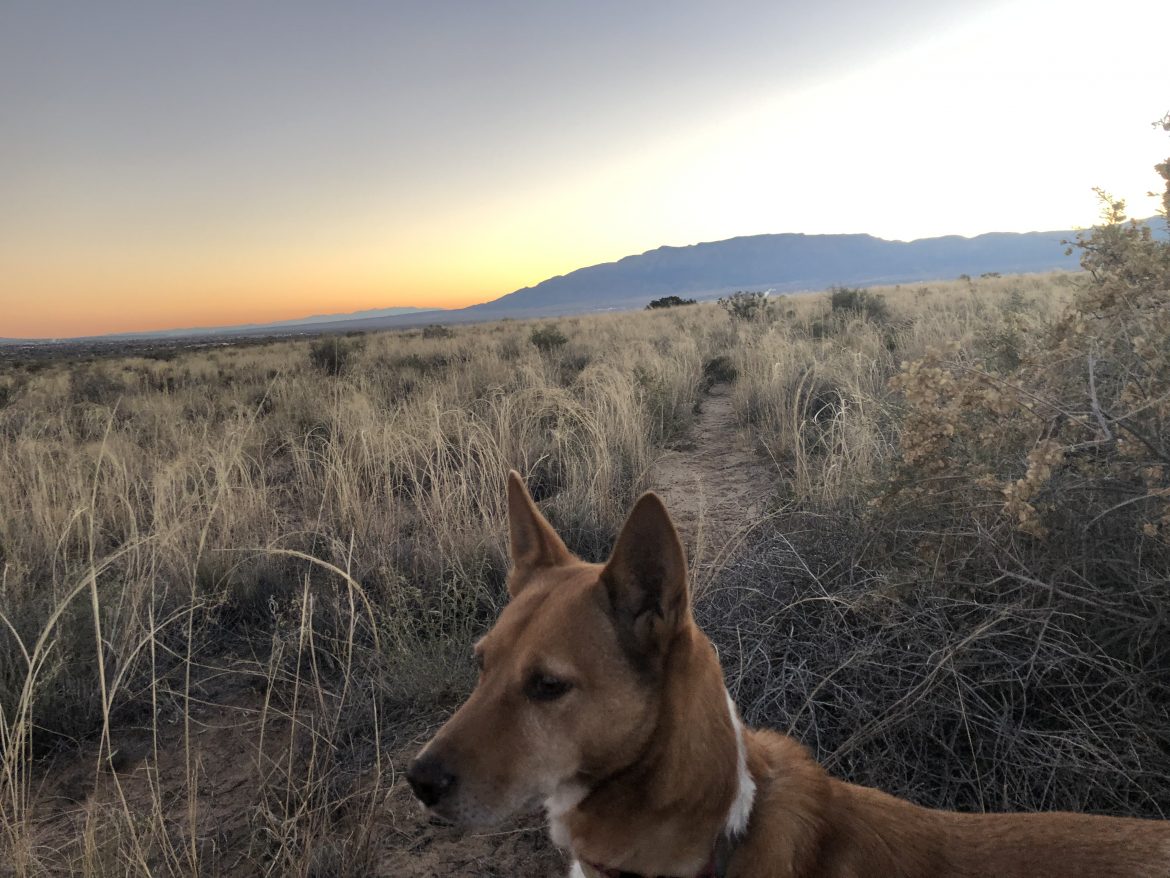 Leashed dogs would still be permitted but many Petroglyph National Monument trails are proposed for closure.

The National Park Service (NPS) wants to take away my dirt trail. My half mile of single track winds between four-wing saltbush clumps and kangaroo rat burrows. For about 20 years, as often as weekly, I’ve run that particular path.  Now, Petroglyph National Monument, as part of its Visitor Use and Management Plan, proposes to close it, along with 90 some miles of other trails.

Presently over 130 trail miles of  lattice work paths cross the monument’s 7,209 acres of iconic volcanic escarpment and mesa on Albuquerque’s west side. The NPS says that such an expansive trail system is incompatible with its legislated mandate of protecting in perpetuity the more than 20,000 petroglyphs and other cultural, archaeological, and geological features that define the monument.

Petroglyph National Monument does not have a formally adopted and enforceable, comprehensive trail plan. Since the monument’s 1990 creation, people have mostly just gone where they pleased. It’s jointly owned and managed by the National Park Service and the City of Albuquerque’s Open Space division. It sits less than a quarter of a mile from my house in Albuquerque’s Taylor Ranch neighborhood.

I’ve observed over 100 wildlife species within a mile of my house as I walk, bicycle, and run along my neighborhood trails. In recent weeks from monument trails I’ve seen black-tailed jackrabbits and falcons and heard coyotes and western meadowlarks. I don’t take lightly local trail reduction plans.

So when the NPS started its visitor management and trail planning process more than two years ago, I listened to park officials, and then submitted several pages of written comments on behalf of my neighborhood association.

Among other requests, I advocated for a trail network that maintained neighborhood access points. I asked that existing trails, such as an 8 mile rim path along the upper edge of the monument’s escarpment, remain open. And I requested that a loop trail around the monument’s interior, linking all the key features, continue to be available.

Most importantly, in my comments I said, that all of my suggestions were subject to their compatibility to the needs of the Native American Pueblos and Tribes for whom the land, now called Petroglyph National Monument, is their ancestral domain. The monument’s enabling legislation says nothing about bicycling or recreation. It is however explicit about protecting features and access that are essential to the traditions and practices of those First People.

This week, NPS staff, led by Superintendent Dennis Vásquez, held two public meetings to explain the proposed visitor management and trail plan and to solicit public comment on it until 30 November. Vásquez explained that the two year process first built from applicable law. He said listening to and taking input from stakeholders, especially from 29 Puebloan and Tribal representatives, was foundational to the process.

Vásquez stated that over 100,000 people live within a mile of the monument’s boundary and within a few decades that number will double. This year documentation of annual visitation doubled from last, by taking into account the more than 50 neighborhood access points. I am a regular part of the current 300,000, and growing, annual monument visitors.

The existing trail system consisting mostly of roads and paths that either predate the monument or are social trails, made haphazardly by visitors going wherever they happened to go. Many of the trails proposed for closure are subject to erosion, cause habitat fragmentation, have safety issues, and/or pose risks to archaeological and cultural features. The NPS preferred plan will eliminate equestrian use, greatly reduce bicycle access, and minimally restrict leashed dog walking across the monument.  Neighborhood access points will be reduced but not eliminated.

The National Park Service is built upon the tension of managing lands for the enjoyment of the current generation while protecting them for the generations to come. It is about preserving the commons.

This morning at dawn my leashed dogs and I ran along my favorite, but proposed to be closed, monument trail. I pondered my impending personal loss. If the NPS preferred plan is adopted, over 60 miles of trails I regularly use will be gone. Most of those that remain I will no longer be able to bike.

As the sun came up and shed light on my thinking I realized I would still have many miles of trails, my Puebloan and other Tribal neighbors would have sacred spaces better protected and honored, and the animals facing human encroachment would have better habitat. Our shared use of land, air, climate, and water demand that we each consider and minimize our impacts.

For the good of the many and of those to come, I can peacefully surrender my trail. After all, I’ve just been borrowing my favorite sections of Petroglyph National Monument from future visitors. The NPS’s preferred plan is happily mine too.

Daniel Shaw writes frequently on environmental topics and his work as a science teacher and co-director of a student monitoring program along the Rio Grande has earned national recognition.