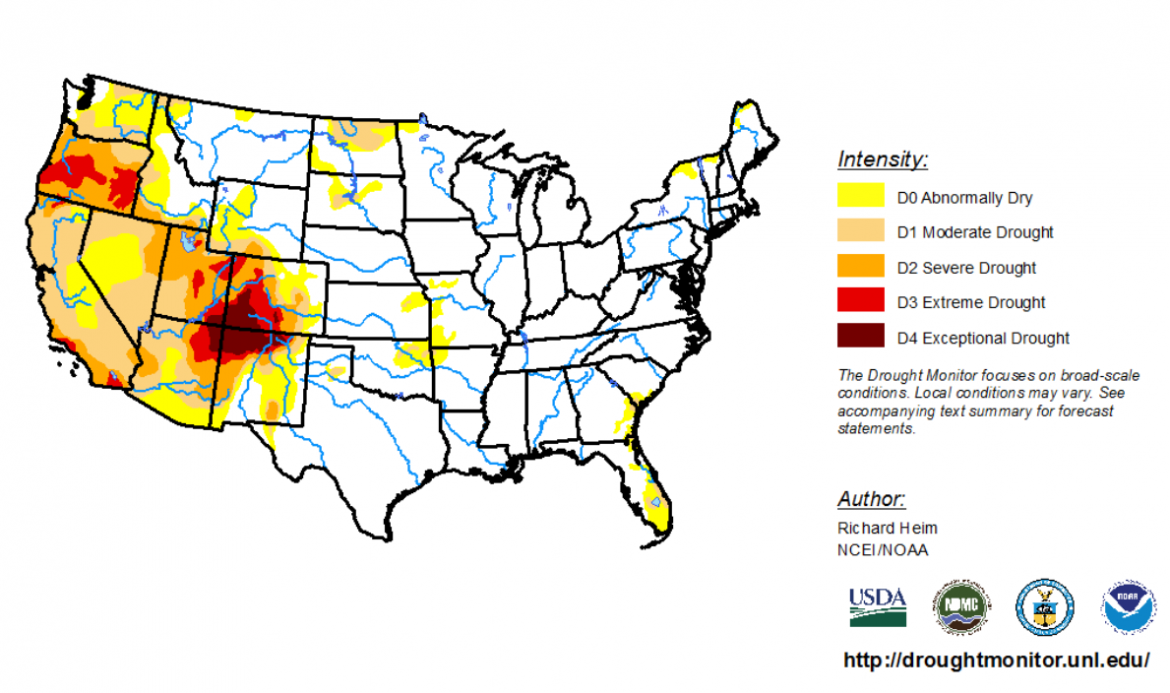 The Four Corners is at the epicenter of drought in the continental United States, even as conditions in other parts of the Southwest improve.

“The Four Corners is getting further and further behind in precipitation,” said Royce Fontenot, senior hydrologist for the National Weather Service in Albuquerque, during a briefing Thursday by the National Oceanic and Atmospheric Administration’s (NOAA) National Integrated Drought Information System. “That’s had a huge impact on local water supplies, particularly local municipal water supplies in the Four Corners.”

He noted, “Almost all the reservoirs through the intermountain West are below normal for where they should be this year.”

Two of the worst-hit systems, he said, are the Rio Grande and the San Juan River, a tributary of the Colorado River. But the Chama, Jemez, San Francisco and Gila rivers in New Mexico are also lower than normal for this time of year.

In southern New Mexico, Elephant Butte Reservoir on the Rio Grande has bumped up a bit from earlier this fall—but is still only at about six percent capacity. That low level is due to both long-term drought and short-term drought, Fontenot said.

As of Wednesday, reservoir storage across the Rio Grande Basin was only at four percent.

October was a relatively wet month, and brought early snowstorms to some mountain ranges. But November was fairly dry, Fontenot noted.

“What do we need to get out of this drought?” Fontenot asked. “We would need 167 percent of normal [precipitation] to push the drought index to zero in six months.”

But currently, we’re still in an “El Niño Watch,” which means El Niño conditions have not yet formed.

El Niño is dependent on sea surface temperatures in the eastern Pacific Ocean—and for New Mexico, El Niño conditions can mean increased precipitation: better monsoons in the summer and increased snowfall in the winter.

El Niño conditions used to bring cooler-than-normal winter temperatures for the Southwest. That’s not the case anymore, however: “Climate, in the general sense, has gotten warmer over time,” Halpert said. And looking at the trends over the last 15 years, for the West, El Niño now favors above-average temperatures.