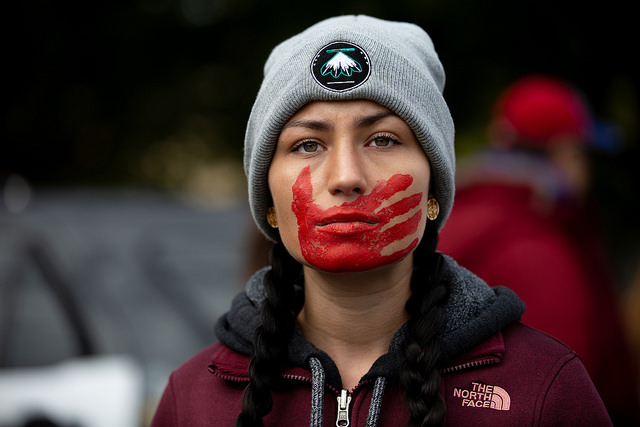 A participant in the Greater Than Fear Rally in Rochester, Minnesota. Flickr/cc

In 2017, the U.S. Department of Justice declined to prosecute more than a third of cases referred to them in Indian Country. That’s business as usual according to a new report by the department.

The report reveals that U.S. attorneys’ offices left 37 percent of referred cases from Indian Country unprosecuted in 2017 — a figure slightly up from 2016 and steady with data since 2011, after then-President Barack Obama signed the Tribal Law and Order Act into law. The percentage continues to plateau despite funding for tribal law enforcement from the Trump administration. Lawmakers like Sen. Tom Udall, D-N.M., see the department’s prosecution rate as failing members of federally recognized tribes.

“This report only confirms that Native victims continue to fall through the cracks of our justice system,” Udall wrote to the Associated Press. Federal crime data has long suggested that Indian reservations have higher rates of violent crime than the national average, especially when it comes to violence against women.

Of the cases that went unprosecuted, over a quarter were allegations of sexual assault against children and adults. “Although difficulties in prosecuting physical assault, sexual assault, and child molestation cases are not unique to Indian country,” the report reads, “structural barriers in Indian country may compound the challenges.”

The Justice Department attributes many of those barriers to the complex organization of law enforcement in Indian Country, which stems largely from a tangled web of jurisdictions. In major crimes like murder or child abuse, which are managed by federal agencies, victims and witnesses often have to travel long distances to testify in federal court. Federal investigators and prosecutors are also rarely based on reservations, making it difficult for them to foster meaningful relationships with communities. Overall, the report cited insufficient evidence as the top reason that cases were declined.

The report follows mixed progress in the Justice Department’s work with tribes. The 2010 Tribal Law and Order Act attempted to improve the relationship between tribes and U.S. attorneys’ offices by codifying tribal liaisons in Indian Country districts, among other goals. But last year, the Office of the Inspector General criticized the department’s response in a report that found that “the Department and its components still lack a coordinated approach to overseeing the assistance it provides in Indian country.”

Before being ousted in early November, Attorney General Jeff Sessions launched multiple initiatives to strengthen law enforcement in Indian Country. In April 2017, he began expanding tribes’ access to national crime databases, and the Justice Department released public safety grant applications to tribal communities early this year. Trent Shores, U.S. Attorney for the Northern District of Oklahoma and chairman of the Attorney General’s Advisory Subcommittee on Native American Issues, said in a statement that the department is also expanding cross-deputization, funding for juvenile programs, and services to victims.

In recent years, tribal courts have increased their own prosecution of non-Native offenders, a job often reserved for federal officials. That’s largely thanks to the Violence Against Women Act, but tribal prosecutors are still limited in their abilities. Meanwhile, the act itself could lapse in less than two weeks unless it’s reauthorized during Congress’ lame-duck session.

Elena Saavedra Buckley is an editorial intern at High Country News. Email her at elenasb@hcn.org or submit a letter to the editor.