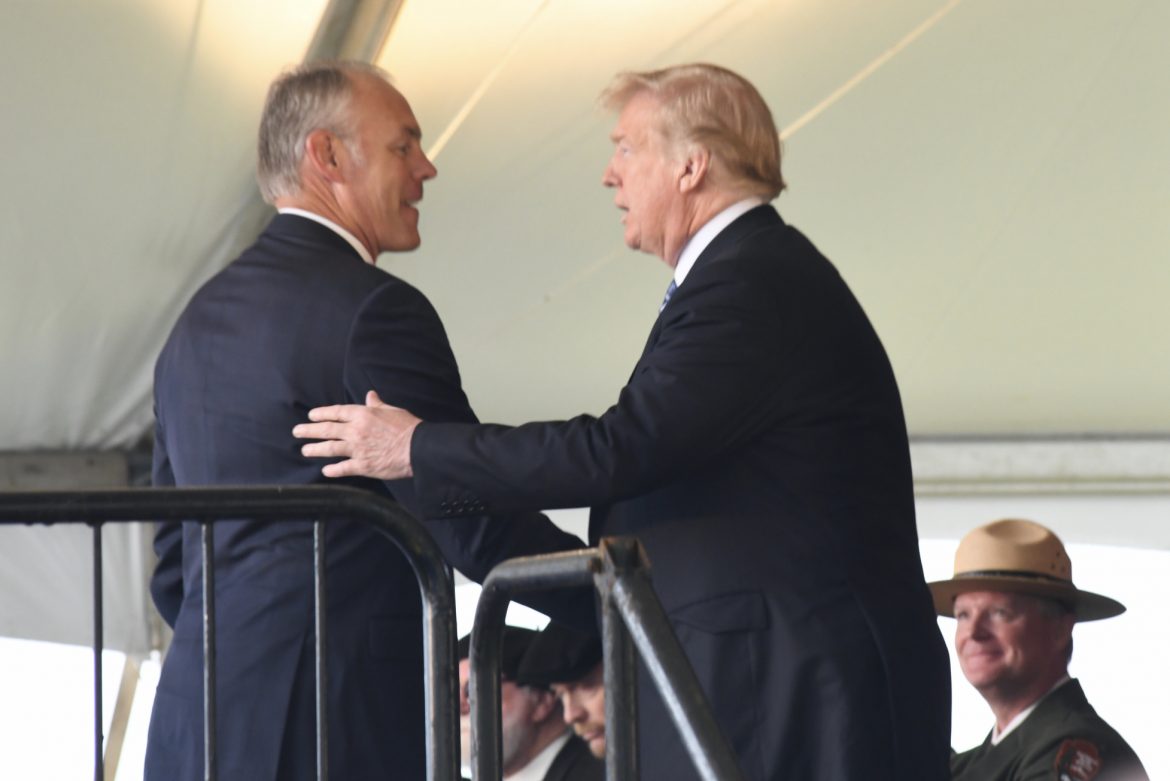 U.S. Dept. of the Interior

Ryan Zinke will step down from his post as Interior secretary, President Donald Trump announced Saturday.

“Secretary of the Interior @RyanZinke will be leaving the Administration at the end of the year after having served for a period of almost two years,” Trump wrote in a tweet. In a second tweet, Trump said he plans to announce a replacement in the coming days. In a resignation letter obtained by the Associated Press, Zinke attributed his departure to “vicious and politically motivated attacks.”

Zinke, a former Montana congressman and Navy SEAL, oversaw much of the Trump administration’s energy dominance agenda, including the ramp up of public lands oil and gas leasing and the rollback of environmental protections. The Interior Department includes the Bureau of Land Management and the National Park Service, which together manage 330 million acres of public lands, mostly in the West. Under Zinke, the Interior Department opened up large swaths of the West to oil and gas drilling, rolled back a suite of climate change policies, and abandoned a number of collaborative land management agreements spearheaded by the department under former President Barack Obama.

Zinke announced his intention to rewrite one such plan, on sage grouse protections, early in his tenure. That reversed a deal that included oil and gas interests, environmental groups and states. The new plans, which were released earlier this month, substantially cut back habitat protections and weakened drilling restrictions.

Zinke also led the administration’s push to shrink national monuments. In 2017, the Interior Department proposed slashing Bears Ears and Grand Staircase-Escalante national monuments, in southern Utah, as well as Cascade-Siskiyou National Monument in Oregon and Gold Butte National Monument in Nevada. The move was widely viewed as a capitulation to Utah’s legislators and mining interests, the result of a multi-decade fight against federal land management in the region. The Bears Ears monument, which encompassed land once held by the Navajo Nation and the Hopi Tribe and included a number of historically and culturally significant sites, was the first to include tribal nations in planning and oversight. The decision to shrink it largely excluded them and remains mired in the courts.

Zinke, meanwhile, spent much of the latter half of his tenure embroiled in ethics scandals. In October, the Interior Department’s ethics watchdog referred an investigation into his involvement in a land deal near his hometown of Whitefish, Montana, to the Department of Justice, signaling he could face a criminal investigation. Overall, at least 17 separate investigations into Zinke’s behavior have been initiated, according to Citizens for Responsibility and Ethics in Washington, including an examination of his involvement in the erasure of climate change from department reports and retaliation against a whistleblower, Joel Clement.

After Zinke joined the Interior Department, he promised to reverse the culture of harassment in the National Park Service and other Interior agencies. A survey released earlier this year found that more than 30 percent of Interior Department employees reported being harassed. And in April, the director of the Bureau of Indian Affairs, appointed under Zinke, resigned amid allegations of harassment.

As Democrats prepared to take control of the House of Representatives in January, they had promised to investigate Zinke’s record, particularly his ties to fossil fuel industries. Raúl Grijalva, the Democratic representative from Arizona who will take over as chairman of the House Committee on Natural Resources, called for Zinke’s resignation in November. “We’ve reached a point that Zinke needs to move on,” he told High Country News last month. “There’s no question that the extractive industries have had a free rein under Zinke.”

Zinke’s resignation drew a mixed response from Westerners. “Ryan Zinke came to the Interior Department with an ambitious vision for overseeing the nation’s great natural resources, but he ultimately broke his contract with the American people,” Land Tawney, CEO and president of Backcountry Hunters & Anglers, said in a statement. “We will not stand for an administration that values the priorities of big business and a few deep pocketed individuals over the will of the citizenry.”

Sen. Lisa Murkowski, R-Alaska, applauded his work at the department. “He has been a strong partner for Western states and for Alaska, in particular,” she said in a statement. “After years of frustration with the Department, he came in and took a very different approach — he listened to us, built a great team, and worked with us to advance our priorities.”

Until a replacement is named, Deputy Interior Secretary David Bernhardt will lead the Interior Department. Bernhardt, a longtime oil and gas lobbyist, has faced accusations of conflicts of interest related to his former employment. Under Bernhardt, the Bureau of Land Management eased approval of a pipeline in Southern California proposed by Cadiz Inc., on behalf of which Bernhardt has lobbied in the past.

Kate Schimel is an associate editor at High Country News, overseeing Alaska, the Pacific Northwest and the Northern Rockies.  Email her at kateschimel@hcn.org or submit a letter to the editor.