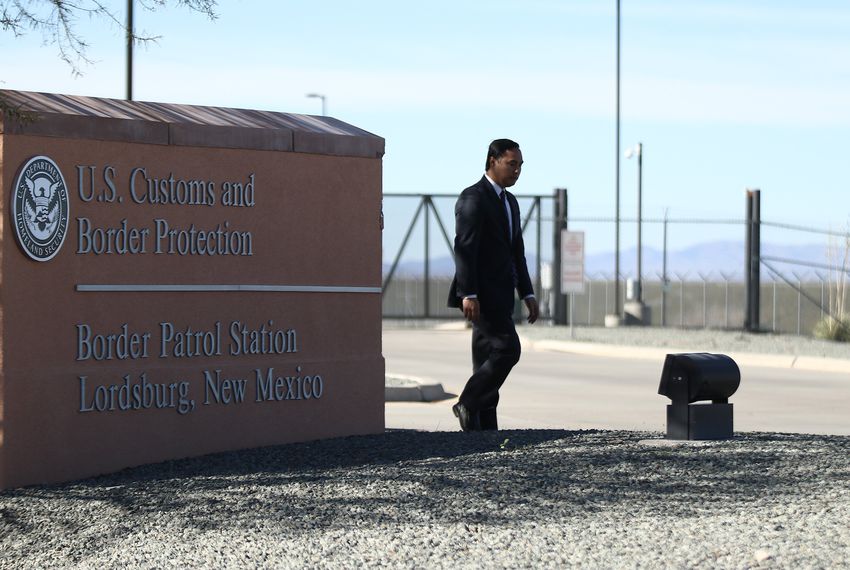 U.S. Rep. Joaquin Castro, D-San Antonio, and other current and incoming members of Congress toured the U.S. Customs and Border Protection station in Lordsburg, N.M. on Dec. 18, 2018 to learn more about the in-custody death of a 7-year-old immigrant girl.

LORDSBURG, N.M. — Current and incoming Democratic members of Congress said Tuesday they had more questions than answers after touring U.S. Border Patrol facilities where a 7-year old Guatemalan girl was taken before dying earlier this month.

One member did leave the facilities certain of one thing – that the commissioner of Customs and Border Protection should step down from his post following the tragedy.

“Based on my conversations with him, based on his conduct, I believe that [Customs and Border Protection Commissioner Kevin K. McAleenan] should step down,” said U.S. Rep. Joaquin Castro, D-San Antonio, the chairman-elect of the Congressional Hispanic Caucus. Castro said McAleenan told him he didn’t want to politicize the death in front of Congress, which is why the commissioner didn’t make members aware of the death immediately. Castro said CBP officials are required by law to inform members of Congress about the girl’s death within 24 hours but failed to do so.

“But because it’s such a rare occurrence, that makes it arguably the most significant thing that could have been discussed,” Castro said.

The child, Jakelin Caal Maquin, and her father, Nery Gilberto Caal Cuz, were apprehended with a large group of undocumented immigrants near Antelope Wells, N.M., shortly after 9 p.m. on Dec. 6. About eight hours later, Caal Cuz told agents his daughter was vomiting while the pair was on a Border Patrol transit bus. Agents alerted the station to prepare to administer care, but her condition worsened and her temperature eventually reached about 105 degrees.

She was flown to a hospital in El Paso, where she died at about 12:30 a.m. on Dec. 8, according to a statement from Customs and Border Protection.

Castro led the delegation, which included U.S. Rep. Al Green, D-Houston, and congresswomen-elect Sylvia Garcia and Veronica Escobar, D-El Paso, to New Mexico. He added afterward that he wants to know when Department of Homeland Secretary Kirstjen Michele Nielsen was made aware of the death and called for an independent congressional investigation into the matter.

Several members said they were disturbed by what they saw on the tour of the facilities.

“No running water, no area to bathe, no water to cook,” said U.S. Rep. Ben Ray Luján, D-NM. “We found out that the food provided both a Antelope Wells and here in Lordsburg to the asylum seekers is granola bars, small juice boxes, and frozen burritos. And what I would describe as inhumane holding cells where we saw children with adults, and overcrowded facilities with a shared toilet.”

Green said what he saw on the tour “is unbelievable and unconscionable. The [ASPCA] would not allow animals to be treated the way human beings are being treated in this facility,” he added. “To tolerate what I have seen is unthinkable. We as members of Congress have got to do more to make sure that this kind of facility is either shut down or we have got to do more to make it a lot better than it is.”

Last week, attorneys for Nery Gilberto Caal Cuz, Jakelin’s father, disputed reports that she had gone for days without food or water before entering federal custody and added that they are conducting a separate investigation. According to the CBP statement, agents conducted an initial screening of Jakelin that “revealed no evidence of health issues. Additionally, the father claimed that the child was in good health,” the statement reads.

“There’s a lot of inconsistencies. They said the father had told him that she had not eaten for three days because she would vomit,” she said. “And then they turn back around and say the father said the little girl was fine and they talked to him about it. Which one is it? I find it incredible that they say they saw no signs or symptoms.”

Garcia said she would support an investigation immediately after the new Congress is sworn in next month and that it could focus first on Jakelin’s case, then expand from there.

A CBP spokesperson in El Paso forwarded requests for comment about the lawmakers’ remarks to the agency’s main headquarters. That office did not immediately respond.

U.S. Rep. Dr. Raul Ruiz, a California Democrat and former emergency room physician, said the tour brought to light questions about whether agents are equipped to handle emergencies like the one that led to Jakelin’s death.

“There are some really serious systemic obstacles and problems and failures in the system,” he said, adding that immigrant children a complete vital sign check and a physical examination when they come into contact with Border Patrol.

The issue has again called into question President Donald Trump’s immigration policies — critics have argued that his crackdown on undocumented immigrants and asylum-seekers has led to more people avoiding ports of entry and instead traversing rough terrain to turn themselves into Border Patrol.

Escobar said those policies include the administration’s practice of turning away asylum seekers at the ports of entry and forcing them to wait in Mexico before making a formal asylum claim.

“These are legitimate challenges, but this administration is addressing these challenges in the cruelest way, in a way that in fact makes things much worse,” she said.

As Democrats prepare to assume the majority in the U.S. House of Representatives, Green said it would be one of his priorities to launch an investigation immediately.

“U.S. House Democrats call for congressional investigation into Guatemalan child’s death” was first published at by The Texas Tribune, a nonprofit, nonpartisan media organization that informs Texans — and engages with them — about public policy, politics, government and statewide issues.